LeWeb comes to London! Today was the first of two days of a little bit of Paris in England (well, quite a lot it seemed, with the whole crew from bouncers to videographers shipped in by the debonair Loic Le Meur). I’m doing photo coverage for a couple of tech publications, and having a fine old time of it.

From the first sight of the superbly-lit Great Hall at the Methodist Central Hall, Westminster… 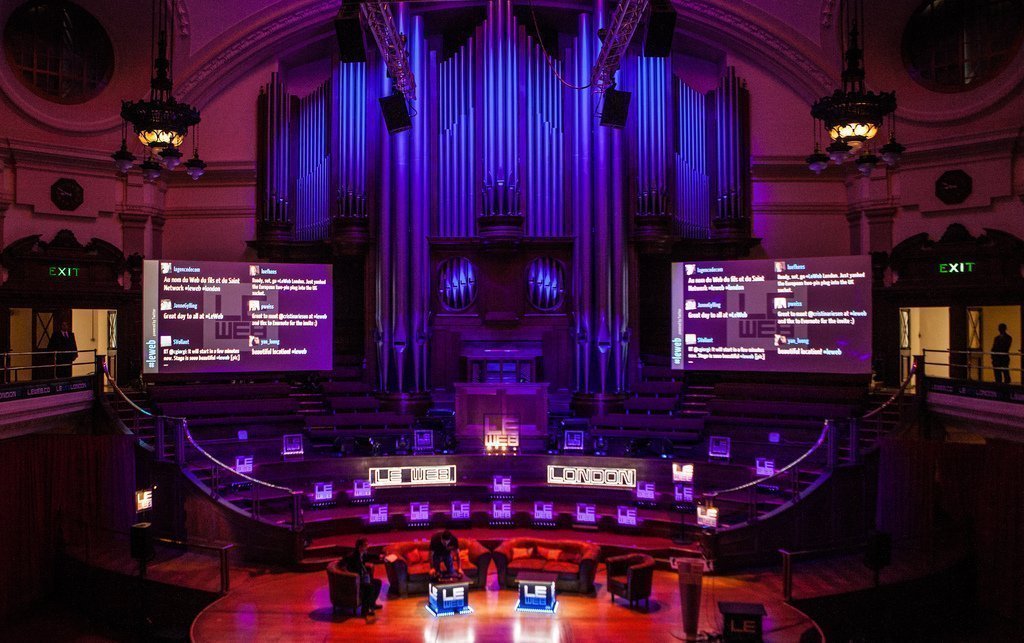 Up to the gallery to get a strong and symmetrical image of this great religious venue lit most vividly. The main technical note here is that this strong purple can play havoc with the Canon 5D MkII sensor. I tend to isolate it when processing in Adobe Camera RAW and selectively desaturate just the purple channel a little. That tends to strip away any strange “blowing out” or haloing around the saturated purples. I could have traded some shutter speed for greater depth of field, but at those distances from the lens, it would work out just fine even at 2.8.
Exif*: 25mm; ISO 1600; f/2.8; 1/160 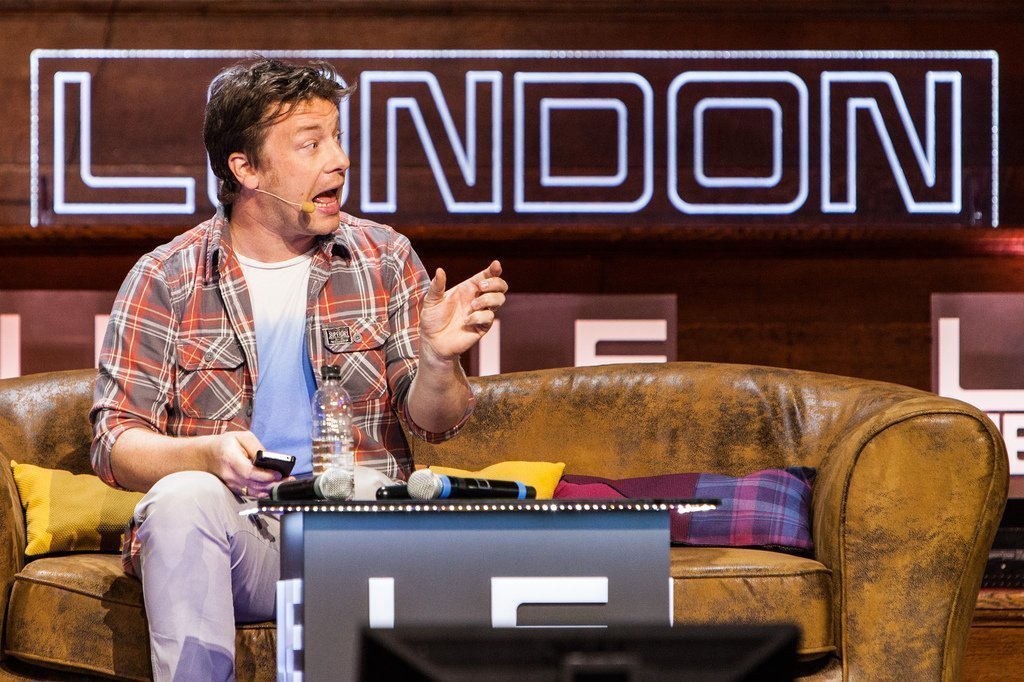 This might look luckily framed – Jamie’s head sitting snugly in the O of LONDON like that. Tell that to the poor guy in Row 11 who had me hovering and twitching over him for a minute making sure I matched Jamie’s every (frequent) move to get the face I wanted, where I wanted it.
Exif: 200mm; ISO 1600; f/4.0; 1/200

…and the take-no-crap wisdom from Martin Varsavsky… 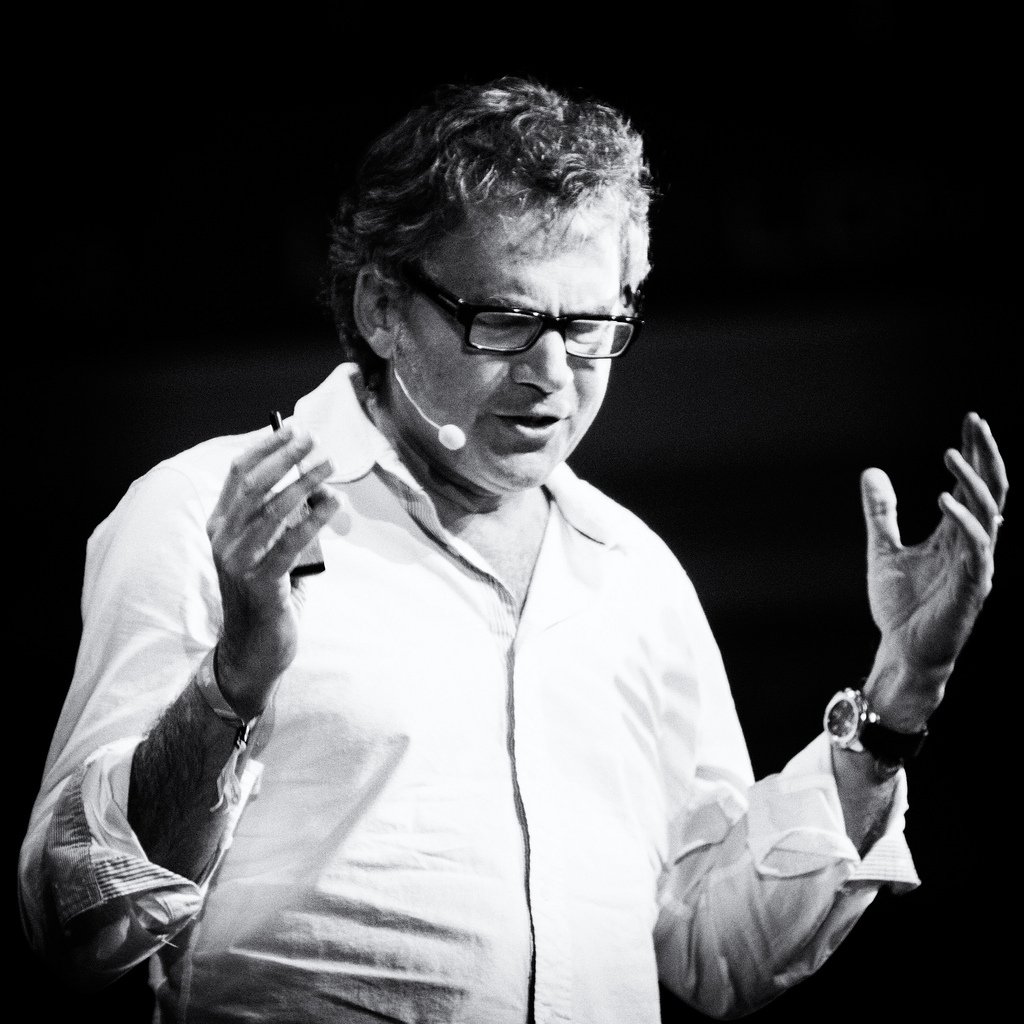 A fairly standard “speaker” shot (intended to play up to the evangelism motif suggested by the religious venue) – but processed using a Nik Silver Efex Pro 2 filter, called Film Noir 1. The default version of this filter has some tacky faux “torn paper” edging (a la Instagram) but I switched it off for this processing. It also has a pretty fierce fake film grain, which I tempered considerably.
Exif: 190mm; ISO 1600; f/2.8; 1/400

…to the breathtaking violin skills of Lindsey Stirling bringing things to a close. 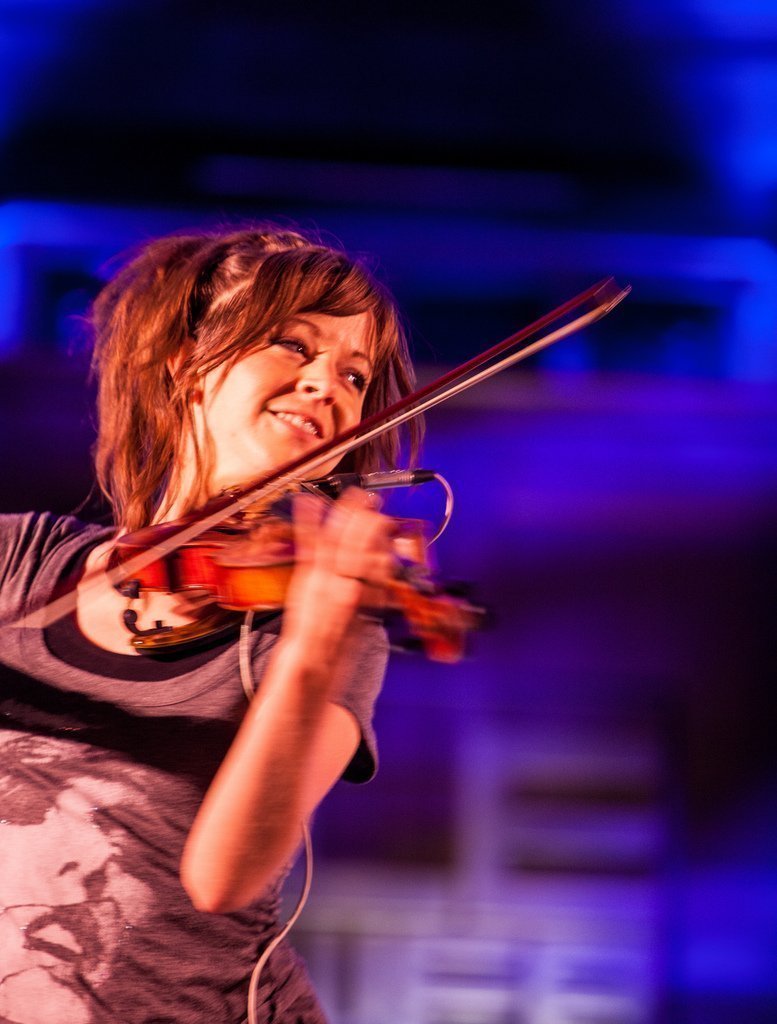 There’s bound to be a bit of “spray and pray” when someone is moving as fast as Lindsey was. Camera on motor drive, lens switched to give linear-movement-stabilisation, and focus to servo drive – able to track with her motion towards and away from the lens. The mirroring of the face on her top with her own face was one of those pleasing bits of luck.
Exif: 200mm; ISO 1600; f/3.5; 1/80 (a bit lucky to have the eyes sharp at this speed, with that motion and focal length)

But the reason for the title of this post is that the most interesting shot of the day for me was the one I wasn’t expecting. (How often is that the case?)

As I nipped out for a break, cameras all tucked away in my bag, I whizzed past the excellent Martha Lane Fox arriving for her speaking slot. And greeting her long-standing collaborator, Brent Hoberman, who’d just finished his.

Just inside the doorway, one of the most famous partnerships in internet business history, and both looking great. Could I get a picture? – I asked. I could. Excellent.

Except the camera body with a lens fitted had precisely the wrong sort of lens for the job, and was set up for the extreme low light conditions inside the venue. And now we’re near the open doorway to a bright, sunny Westminster morning. No time to think – it was get the shot now, or retreat miserably. I wasn’t going to keep these two hanging around.

The lens was a big telephoto – capable of a flattering portrait, but meaning I needed to take a good few steps away a) to frame them correctly and b) because that lens has a pretty lengthy minimum focusing distance. Get too close and it won’t focus, no matter how much light there is.

No, in this case, knowing the auto exposure metering would play up given the mixed lighting conditions, to say nothing of the exposure compensation I had dialled in for an entirely different setting, what I really had to watch was my shutter speed. As long as that was fast enough – and yes, it was right on the edge at 1/60, but enough with the help of image stabilisation from the lens – I knew I could clean things up well enough in post-processing. If it’s too slow, and the image blurred by hand shake, you’re stuffed – but with a good camera sensor most other exposure crimes can be sorted later. I most certainly didn’t have time to take exposure readings or chimp over the back of the camera checking histograms.

And there it is – a few technical imperfections, but a moment that simply had to be seized. At the last minute.

(You can find more images from the day here.) 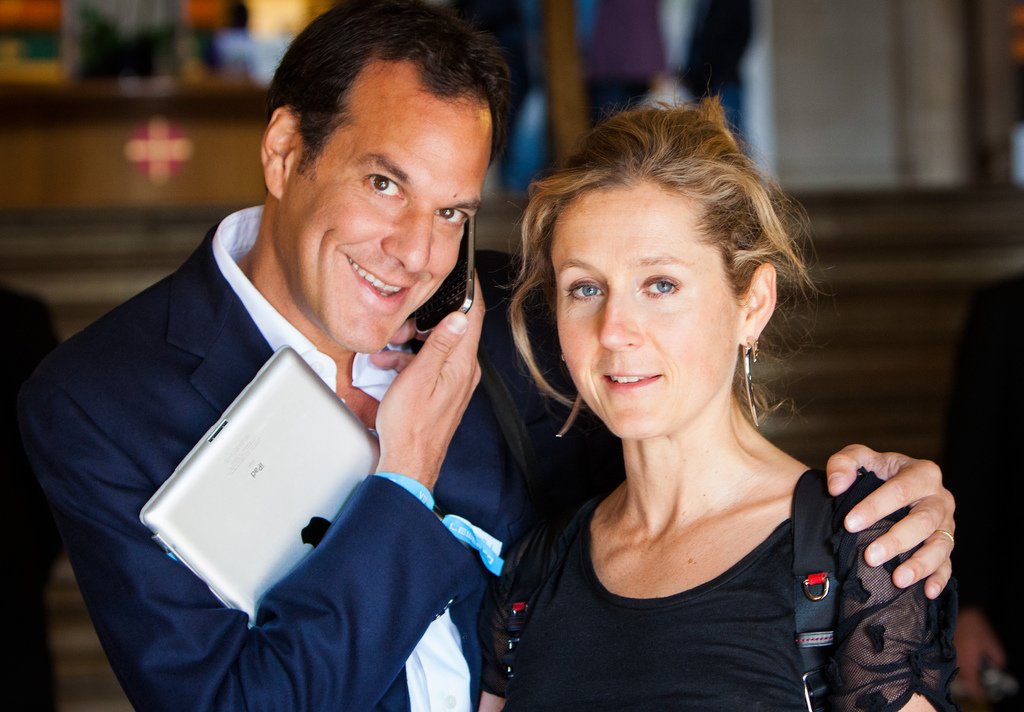 The processing here saved an acceptable, sharp image from overexposure. The latest version of Adobe Camera Raw has great sliders that break up the image into four tonal zones: Shadows, Blacks, Whites and Highlights. Careful tuning of these (for an image shot in RAW format) can bring back the detail to overexposed highlights, and keep the whole image coherent in terms of its relationships between light and dark areas.
Exif: 73mm; ISO 1600; f/4.0; 1/60
(Clicking on these pictures should open them up in a lightbox–you can then use arrow keys to jump between them.)

One thought on “Last Minute”