In the world of typography and design, something about which I knew a fair bit once upon a time, my all-time favourite quote comes from a man called Derek Birdsall. “White space is the lungs of the layout. It’s not there for aesthetic reasons. It’s there for physical reasons.” So, so true.

And white space doesn’t have to be all that white. The point can be made with shadow or silhouette, with obscurity and with suggestion. The negative can imply the positive, and all that jazz. A portrait is more than just a face lit-nicely-a-bit-from-the-side.

These portraits all have something of the spirit of Birdsall about them, I hope: 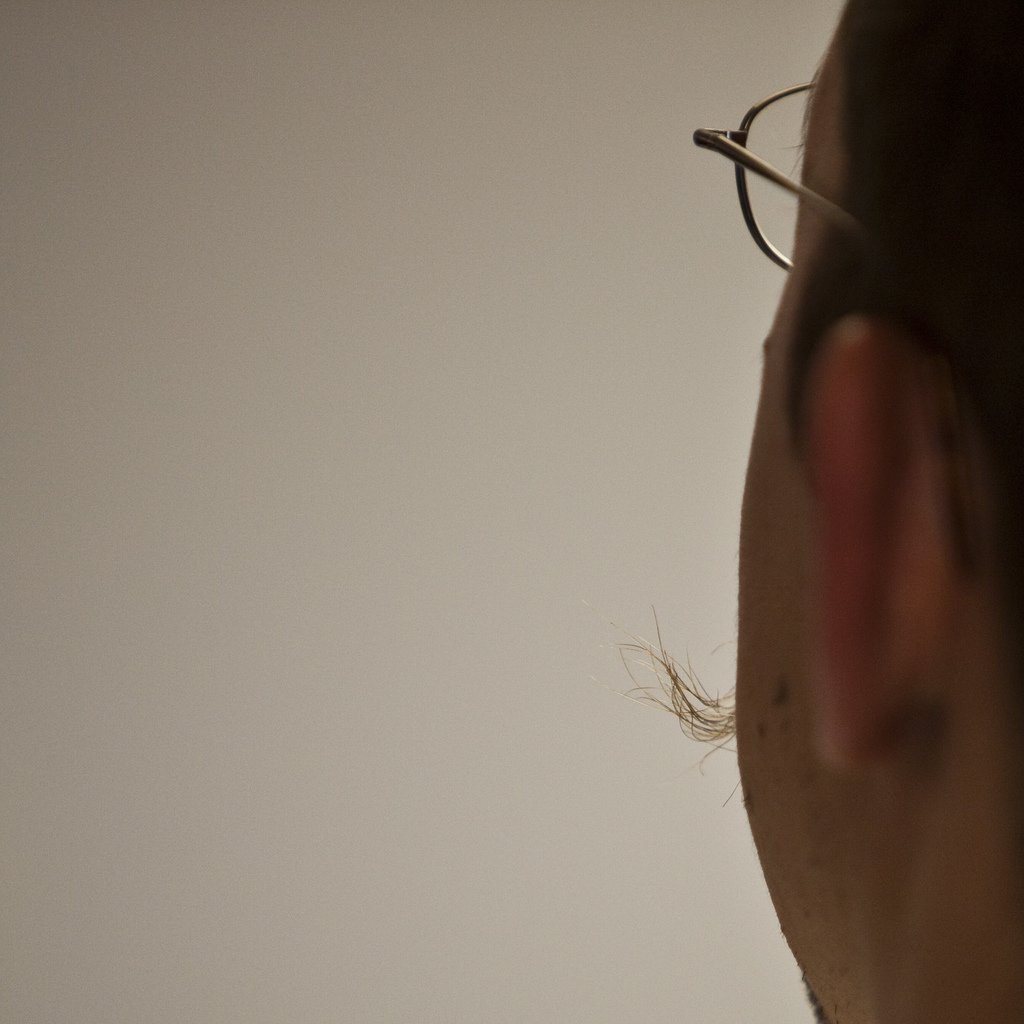 The charismatic Ben Hammersley–a most unusual angle, but one that shows off a distinctive piece of facial furniture. Also notable for the vertical division of the frame between face and not-face.
Exif*: 190mm; ISO 800; f/2.8; 1/200

And so to the ever-unassuming Robert Brook. Bit of an in-joke here: Robert is famous on the Internet for never having had a profile picture. It chimes with his modest personality, so an anti-portrait by way of silhouette gave me an interesting capture, and a bit of a laugh. 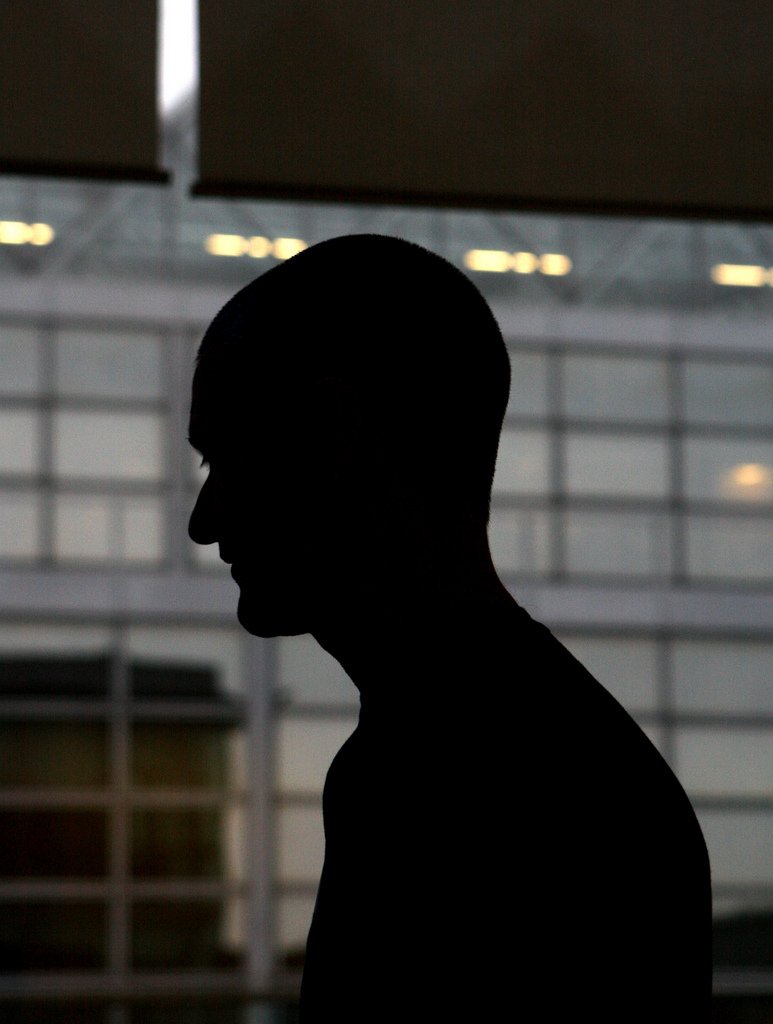 A silhouette isn’t that tricky to produce. You either manually under-expose the subject so it becomes entirely black, or you fool your camera’s automatic settings into under-exposing–this is an example of the latter, with a fiercely bright window in the background causing the camera to drastically shorten the exposure time.
Exif: 70mm; ISO 400; f/4.5; 1/200

The shadow is the close cousin of the silhouette when it comes to portraits-that-aren’t-quite. Anthony Rose, flamboyant digital rebel and all that, has a great mane. So much so that casting it against his title slide said as much about his presence on stage than a dull old shot of his actual face. 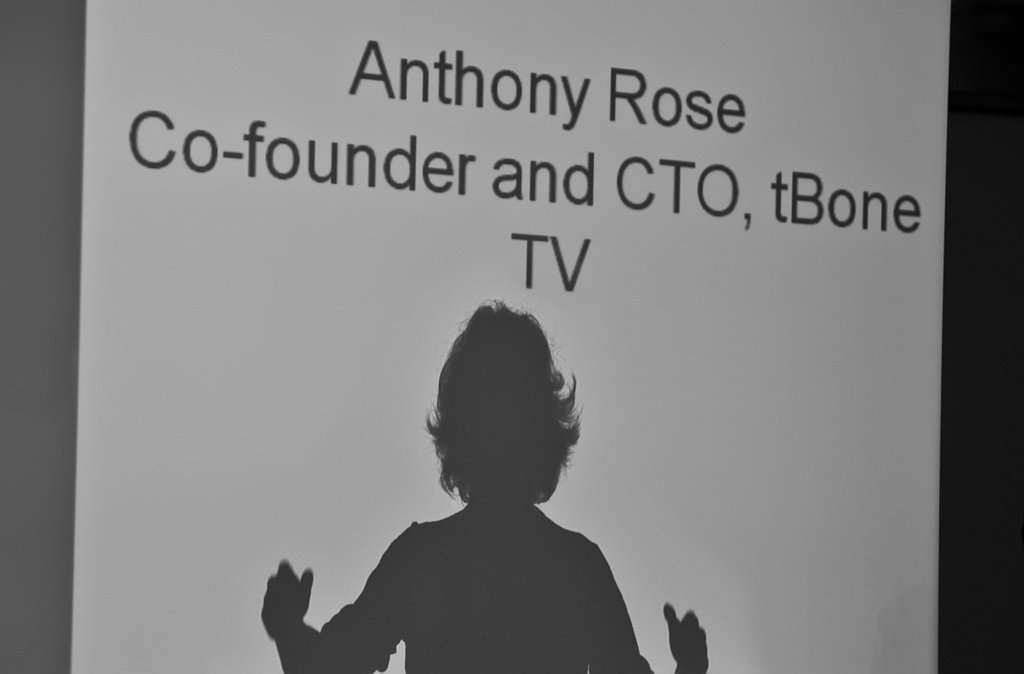 OK, confession time. This is photoshopped. Well, adjusted in Photoshop, anyway. The shot was there, but Anthony’s shadow was quite foreshortened. So he’s been stretched out–only perhaps by 10%–but enough to give a better proportioned figure below the type.
Exif: 150mm; ISO 400; f/4.0; 1/160

Even without resorting to the dark trickery of shadows and silhouettes, the face shot without a face can still have an effect. The anonymous brass player at the summer fair doesn’t need a face as such: what we want to see is the crowd reflected (and oh, how beautifully reflected) in his instrument. That tells a story. 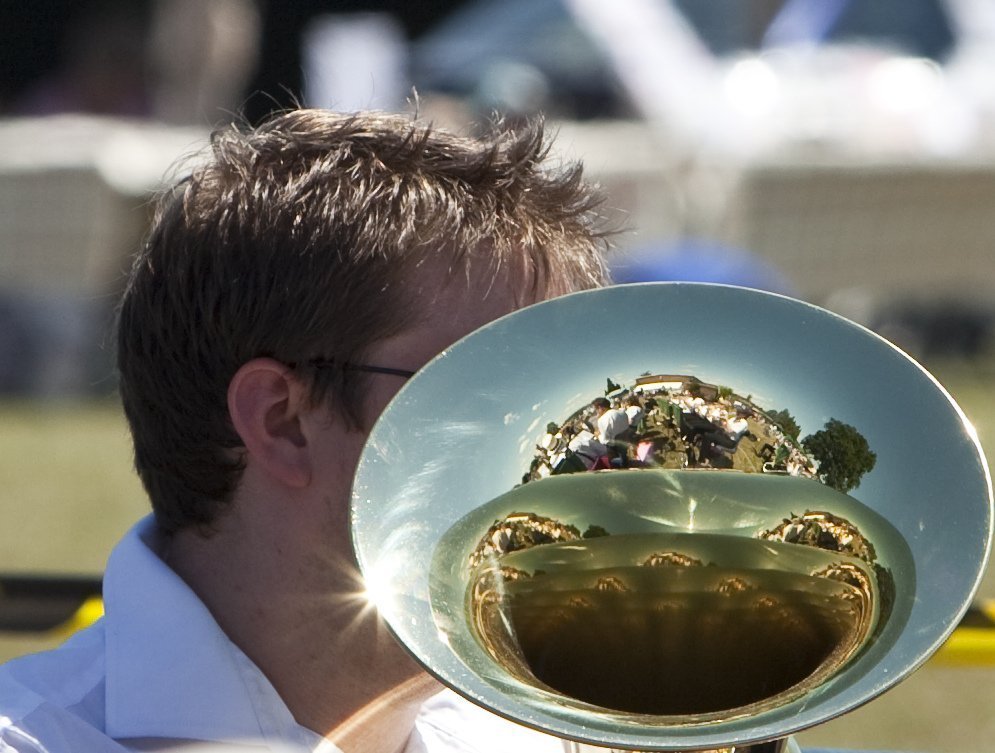 But WHERE IS THE PHOTOGRAPHER? No, I didn’t brush myself out of the reflection. Just a long lens, back in the crowd–enough to be able to pick up the intricacies of the reflection. Intensely bright sunlight meant I could drop the ISO right down to pick up every fine detail, and set an aperture which just about maximised the crispness of the frame.
Exif: 200mm; ISO 100; f/6.3; 1/320

Oh go on then. Just one more. Here we will allow ourselves the luxury of being able to see the subject’s face. At the Labour Party Conference last year, I covered the session where a quiet 16-year-old called Rory Weal “did a Hague” and wowed the delegates in the main hall. Brilliant speech, and as he emerged into the pitch-black backstage area I had a moment to get what may in years to come be a striking portrait of a very young politician right after his first big moment. Or not. You never know.

So this was all about using the Stygian gloom of the backstage blackout to bring through something of the isolated, yet poised sensation of a teenager in a too-big jacket who’s just realised he’s going to be on all the front pages tomorrow…

A frame only possible to shoot with everything set to manual: no camera metering setting can cope with that depth of darkness around the subject without attempting to lengthen the exposure to try and eke out some detail in all that gloom (and thereby burning out the details in the face). So, settings for low-light, and carefully asking Rory to nudge himself into a dim pool of light thrown directly downwards–producing a lighting set-up that could have been a prepared studio setting. (In thirty seconds, while minders homed in.)
Exif: 80mm; ISO 1600; f/2.8; 1/40
(In case you haven’t tried yet, clicking on these pictures should open them up in a nice lightbox–you can then use arrow keys to jump between them. If you like that sort of thing.)