This will be a very boring post if you’re looking for a nice variety of photos. But if you’re interested in one particular question, hopefully not so much.

“So is a smartphone camera actually better than an expensive DSLR then?”

Which is a spin-off question from one I get asked pretty much every week: “so, Paul – what camera should I get?”

Once I’ve hacked through “well, what sort of pictures are you interested in taking?” and “will you get into the technical detail of photography?” and of course the old favourite “you know that spending money on training is usually better in the long run than spending it on more expensive kit?” then I might spit out a few names of suitable cameras. Sure. (I mean, I would stress the learning and training aspects, wouldn’t I? Given that I sell them. But it’s true.)

The bit that might surprise you is that for a lot of people, and a lot of use cases, I think the answer is probably…

Yes. Use the smartphone.

Let’s look at some pictures. I’ve picked a corner of my garden, with today being a sunny, blue-sky day. And I’ve taken the same picture with my phone (Pixel 3a) and a Canon 5D Mk4 with a 24-105 “L” (professional grade) lens. That’s about £400 of phone (which can also do a lot of things other than photo & video) vs about £3,000 of camera (which can’t). No contest, surely? I’ve taken the picture using a few different settings to demonstrate a few possibilities, and, eventually, to justify my answer.

First up, the phone. No frills, just launching the regular camera app with a double-press of the power button, and using all the default settings (flash off, maximum size picture, JPG, HDR off).

Even if you already know what those last two mean, I want to touch briefly on them, as they help to explain how the smartphone scores so many points. JPG is an image compression format. As opposed to the ‘RAW’ format which, as the name suggests, is the raw data captured by the camera’s sensor. JPGs have smaller file sizes, because of the image compression, but they also mean that there’s been something else going on in the camera. Processing. Adjustments, corrections, enhancements to the image, maybe to boost certain colours, perhaps to add some sharpness, or a whole wealth of other tweaks. We’ll say more about JPG vs RAW later. But remember that processing has been happening in the camera.

And HDR – that stands for High Dynamic Range. A fancy way of saying: tweaking the picture so you can see detail in both the very bright areas of the picture AND the very dark areas. Our eyes are quite good at this, certainly compared to most cameras. I won’t get into the trickery between eye movement and brain that’s actually going on (it’s complicated) but we generally have no trouble distinguishing the details of bright parts (“highlights” in camera-speak) and dark parts (“shadows”) within a single image. That “usable range” of brightness-to-darkness is known as dynamic range. And HDR, as the name suggests, applies to any technique that helps to increase that. Yes, yet more processing going on in the camera.

Crudely, it makes very bright things a bit less bright, and very dark things a bit less dark, so that you can see more of what’s going on in them. There are several ways it can be done; for the purpose of this post you need to know that modern smartphones frequently offer it as an option. And we’ll see in this post what sort of impact it can have.

Anyway, first picture. Pixel 3a, default settings as above: 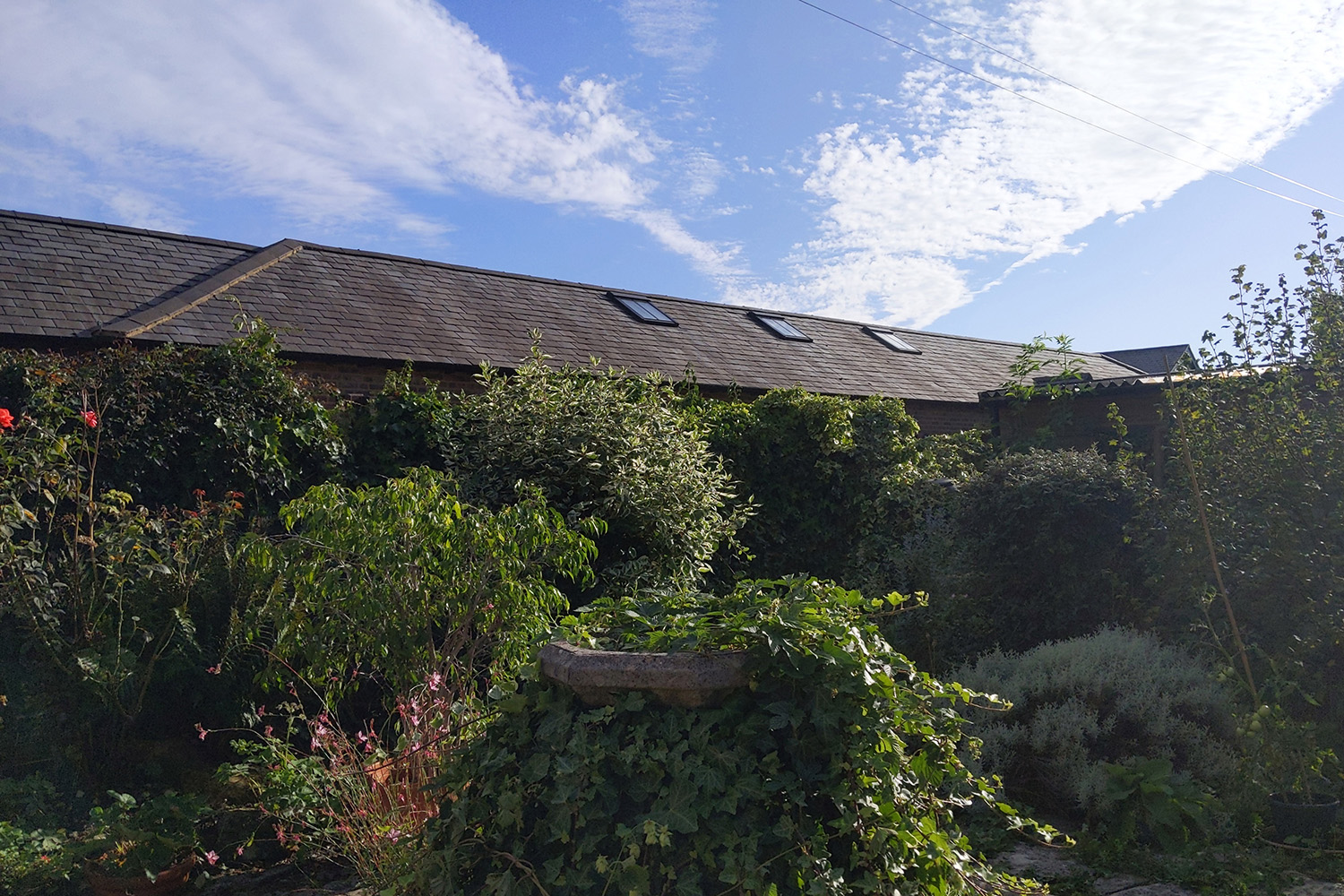 Straight out of the camera, as they say. It being a phone, I just held it up and took the picture. I let the phone decide on focus point, how to deal with darkness and brightness, all that stuff. (Hopefully you can see why I picked this scene – some extremes of bright and dark in there.) The only tweak I have done is to crop it to a 3×2 ratio, making it a bit more ‘landscape’ in shape from the phone’s default of 4×3 (to make comparison with the DSLR’s 3×2 a bit more obvious).

It’s…ok, I guess. Sky is nice and blue, cloud details clearly visible. The dark areas in the bushes, hmm. Perhaps they could be better. But it’s generally ok. Lots of sharp details, can clearly see what’s going on. A 6/10 in anybody’s money.

So how did the fancypants DSLR cope? 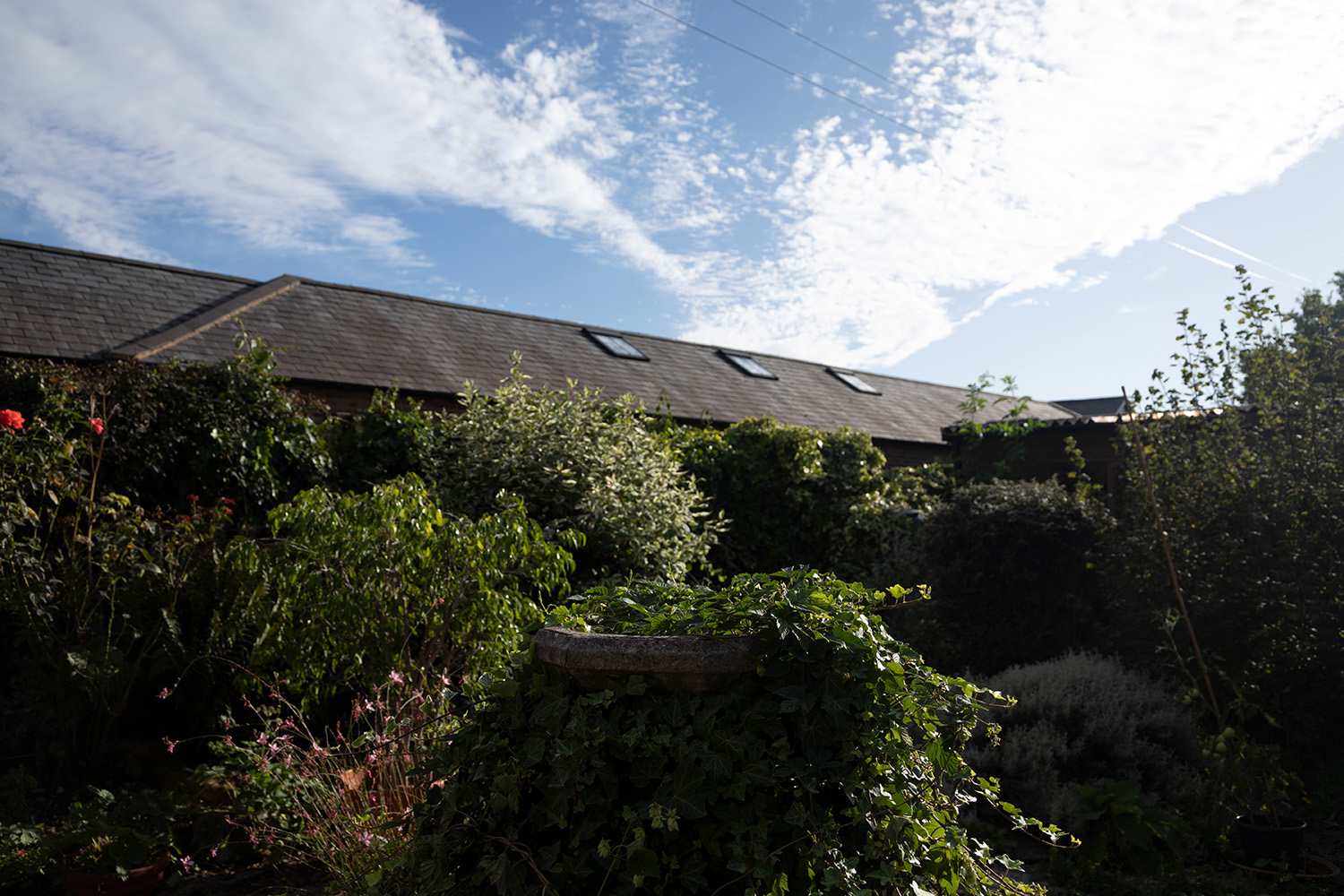 Ah. What a mess. Not nearly as much detail in the clouds, AND the foreground is even worse. A whole heap of indistinguishable shadow. It’s lost out at BOTH ends of the dynamic range! And, hang on, it’s all blurry? What?? Remember that I put the camera on auto as far as possible – it’s decided that the ivy-covered bird table in the foreground is the ‘subject’ and, yes, that’s in focus. But the background? Hell no. And if those of you with a bit of knowledge about how this depth-of-focus thing works are interested, no, the camera didn’t pick a really wide aperture, making the background really blurry. It’s f/6.3 – very much in the middle of the range – nothing extreme at all. But showing just how easily a DSLR can run into trouble.

OK, well, let’s push on. Back to the Pixel. Remember I said I’d turned off the HDR option as my starting point? In fact, the default for the app is to have it switched on. It has 3 settings: off, ‘low’ and ‘high’. Unless you touch the setting, it defaults to ‘low’. So how does that look? 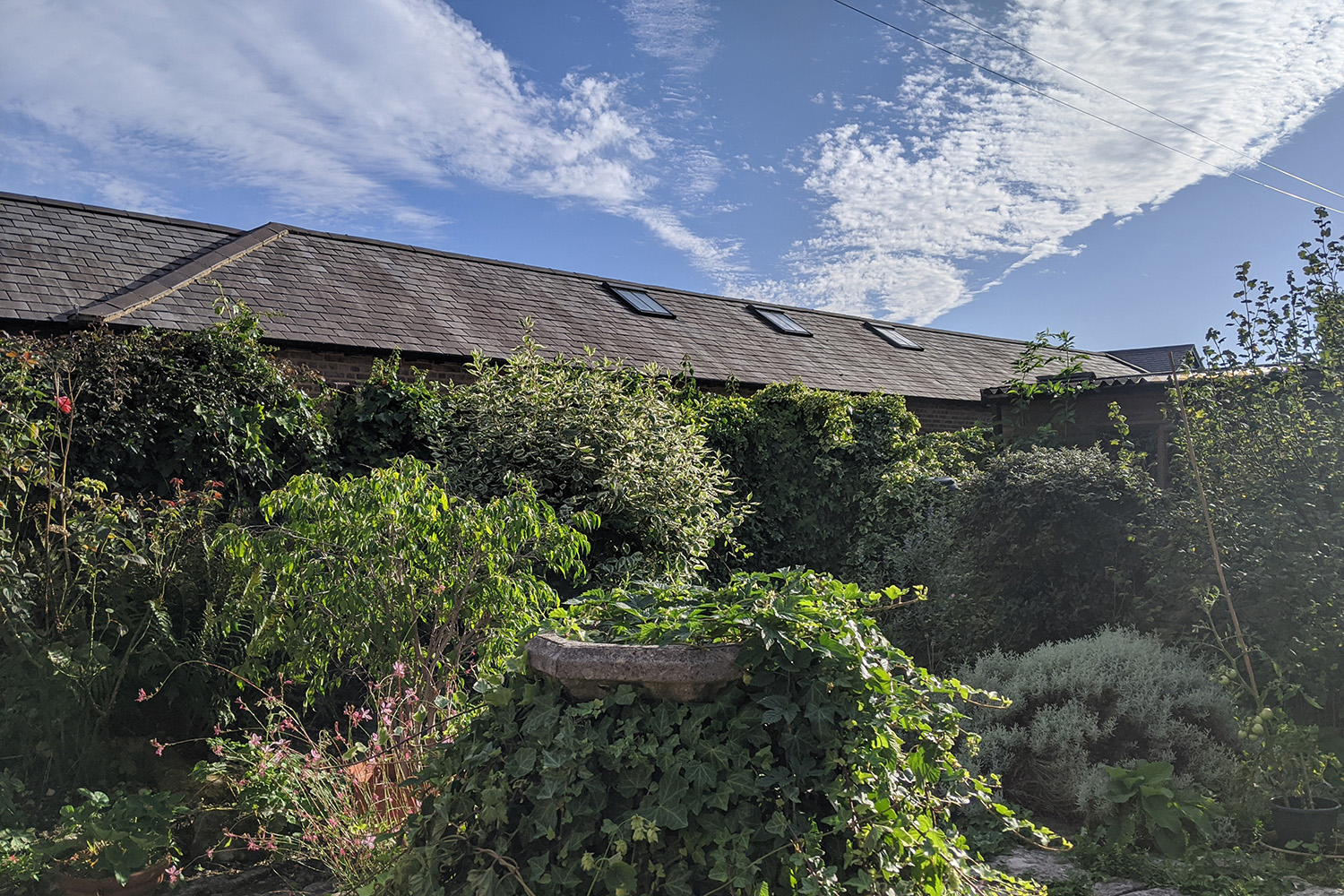 Ok, let’s turn up the gas and try the ‘high’ option. 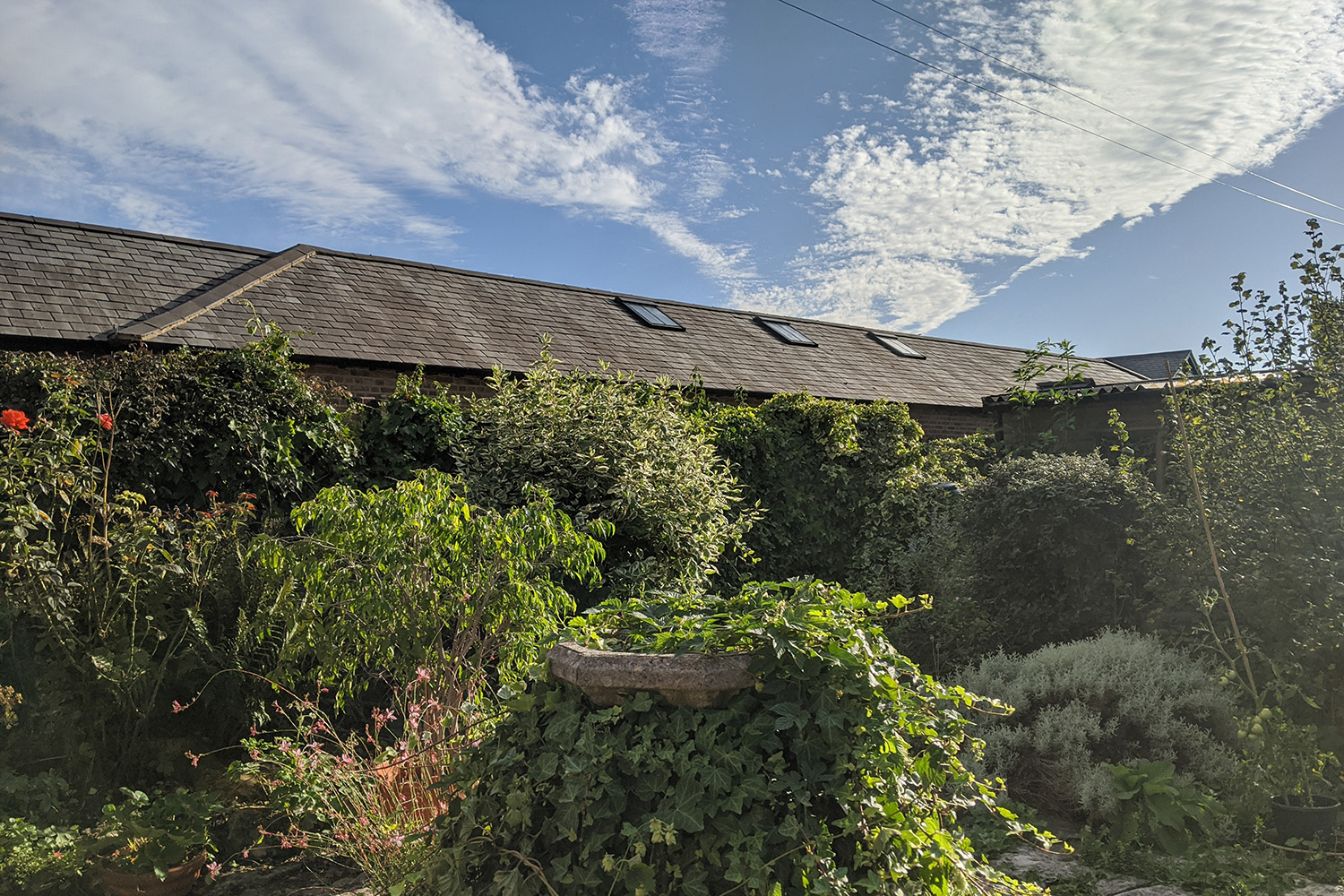 I mean if you like that sort of effect, yeah, great. But it’s looking a bit hyperreal for my taste. Though I guess it’s just behaving as advertised.

We’re seeing more and more processing work piling in here. Phones are BRILLIANT at doing this sort of stuff. And getting better every year. One reason why my answer to the initial question in this post wouldn’t have been the same five years ago…

Now, back to the DSLR. How on earth can I get it on track? What would I do if I were shooting this scene for a house & garden magazine? I’d be having to do my own post-processing on it, for sure. By pushing up the brightness in the shadows, and choking it back in the highlights, we get this: 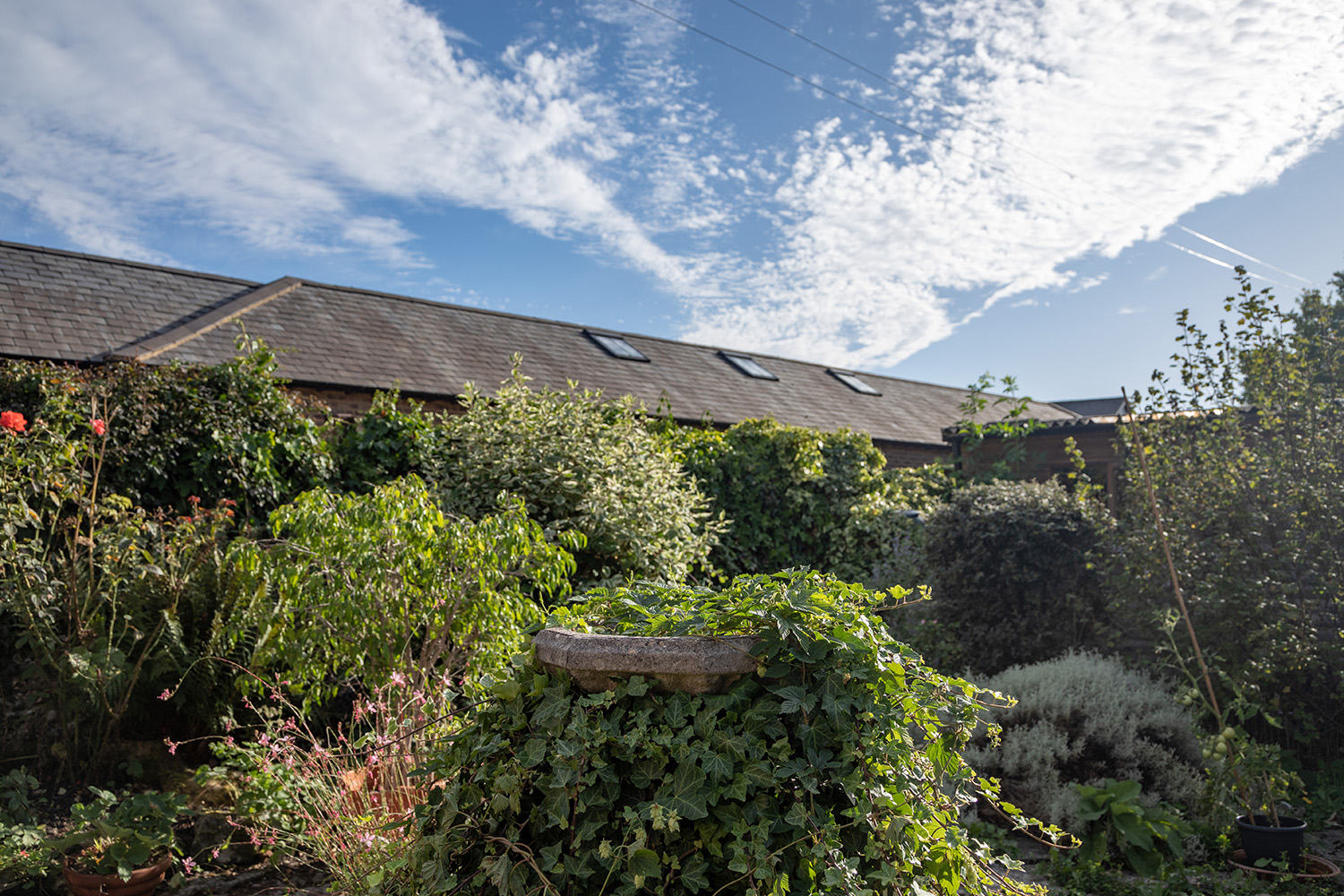 Well, it’s certainly an improvement on the SOOC (straight out of camera) version. Might think harder about where to put the focus point, but being shot in a RAW format there’s a massive amount of latitude available to adjust those highlights and shadows. (This is a big selling point of shooting in RAW – a safety net for exposure right across the dynamic range.) But better than your favourite smartphone version? You tell me.

Oh, and let’s give the stage back to the Pixel for an encore. Because if the Canon can shoot in RAW, so can the Pixel. That’s going to need some post-processing of course, but let’s do just that: 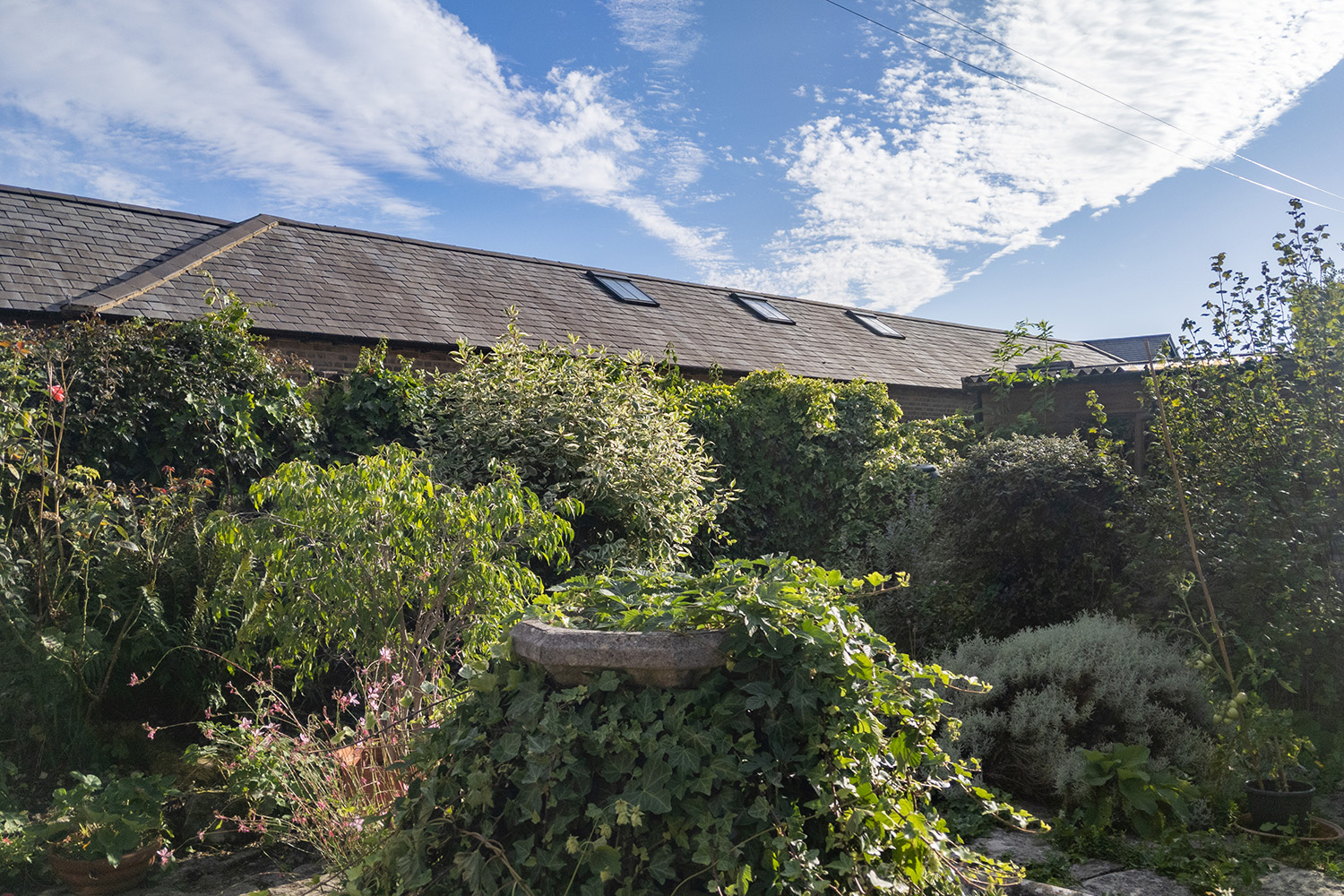 And that’s really quite good.

You can nitpick around colour fidelity and a bunch of other pixel-peeping stuff, but is it really that far from the processed Canon RAW? Is it really the best part of 3 grand’s difference? Ok, you can’t see the work I put in to sort out some slight glare-hazing on the right of the frame, because a phone camera doesn’t have a sun hood (as ever, editing is about what you don’t see as well as what you do). But really. It’s pretty close.

This isn’t a post In Defence of the DSLR. There are many, many reasons why they’re the right tool for the job, particularly for professional work. The benefits… really precise control over every aspect of the photo creation; ability to use a wide range of lenses (and get shots a phone could never attempt); more pixels (though a smartphone has way more than enough for anything you would want to view on a screen, and for most print uses); abilities in low light; abilities involving fast movement and rapid-fire shutter bursts. Plenty enough to mean I’ll be continuing to pack a heavy bag.

But it is a look at that initial question: what’s right for you? And hopefully you can see why I often give a possibly surprising answer.

[If you click on any of the photos you should then be able to flick between them to see the differences more easily.]