It’s a challenge that’s much older than digital photography, of course. As long as there’s been the ability to change an image after the shutter has closed, the cry has gone up: “Yes, but that’s not really photography, is it?”

While the production of photos for the mass market was confined to the High St developing shop, only the pro or the enthusiast would get involved in post-processing–and this would invariably be very hands-on and visceral. You were dipping or dripping or cutting or brushing. Real craft.

The suspicion that tinkering with your images on a screen wasn’t quite legit crept in, as I remember it, when the desktop scanners appeared at the end of the 80s. Then this thing called Photoshop came along, and a million other editing tools flourished. Now we have apps like Instagram that knit together the whole process of image capture and application of effects in a single package.

Because, as I’m essentially a digitally-native photographer, I see the software as just as valid a tool as the shutter. What counts for more: the process of creation, or the thing you create? 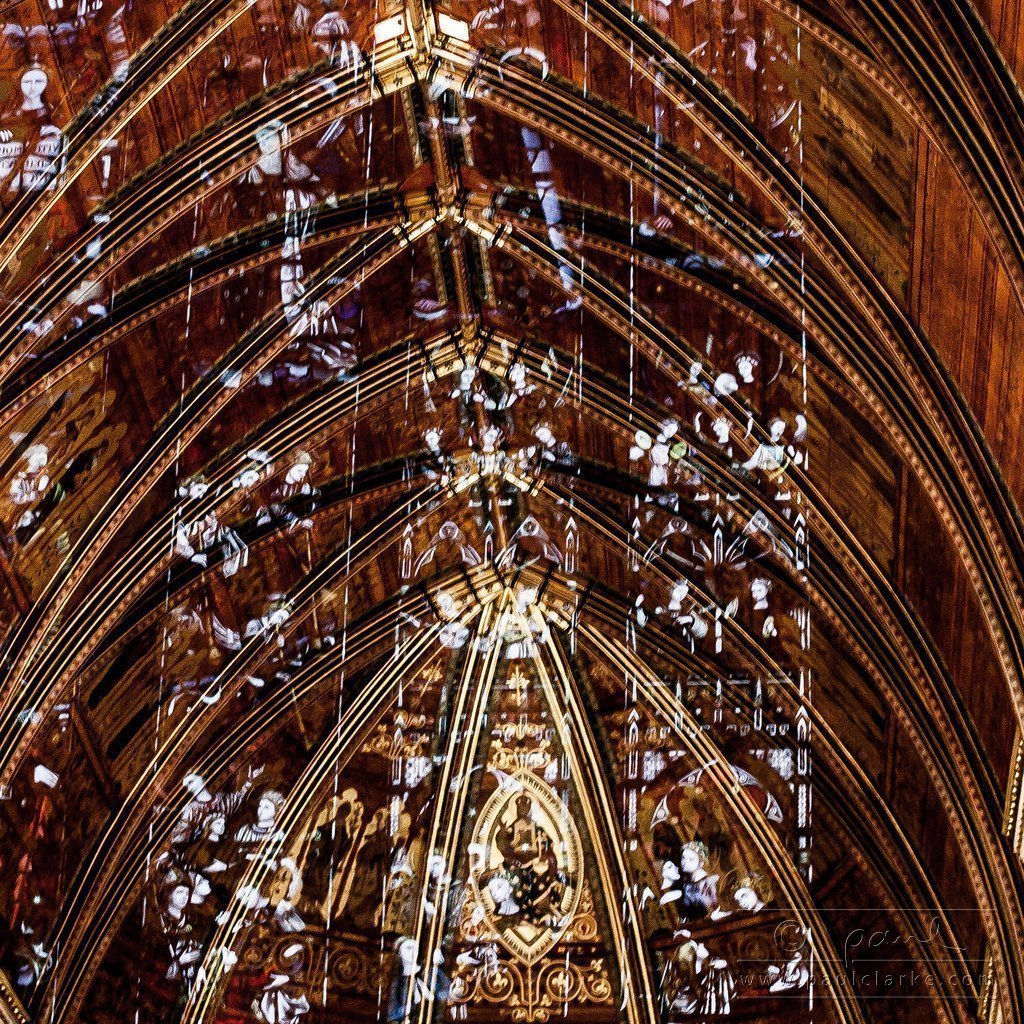 Fairly low-light, but because it’s a still composition I choose a slow shutter rather than a very high (and therefore grainy) ISO number. Post-production is in Lightroom–first cropping to a square composition, then using a little colour correction and a lot of sharpening, to bring out details of the clashing geometries.
Exif*: 50mm; ISO 1600; f/4.0; 1/15

This topic gets some photographers sucking their teeth furiously. There is a “pure” image, they say, and anything you then do to it is akin to “cheating” in some way… You see this term “SOOC” [Straight Out Of Camera]. Any monkey can make that into a pretty picture by ladling on the saturation, or the black-and-white conversion, some gritty contrast and a whacking gloomy vignette. But is the SOOC shot any good? That’s what makes a REAL photographer. (Just look at this discussion to see how animated this topic can get…)

This is all well and good, and of course there’s some truth in there. A great image out of camera always gives you a headstart. And if it’s what you do for a living, getting it right in the camera saves you time. And time is money etc. etc. Oh, and the consequences of manipulating photojournalism are pretty obvious–don’t expect to make a career out of it once you’ve been rumbled.

But really, tools are just tools, whether made of glass or bytes. You should be judged by result, not process.

Anyway: back to that featured image above, which triggered these thoughts on post-production. It’s shot in gloomy light, in a chapel. To be honest, the chapel struck me as a bit hum-ho Victorian Gothic. Was there anything there that would make a really unusual frame? What could I grab in the minute I had that might give a different view of a fairly traditional subject? And as I walked, I caught the last of the evening light reflected in the huge glass screen separating chapel from entrance. Throwing a stained glass pattern across the visual field of the vaulted ceiling. That’ll work, I thought.

The settings chosen: a moderately high ISO but nothing that would cause the 5DII sensor too many problems. A shallowish depth of field at f/4.0 (but with the focused subject quite far from the lens that wouldn’t be too noticeable, and would also let more light in) and a slow shutter at 1/15. Though I could see this would underexpose the image, any slower would introduce shake and blur. If I’d used a tripod I might well have halved that shutter speed knowing I’d have a steady shot regardless. But better to have a darker image I could lighten later, than a fuzzy one: you can raise exposure in post-processing with ease, but it’s much harder (and often impossible) to remove motion blur after the event.

So, hands up: the original image looked like this: 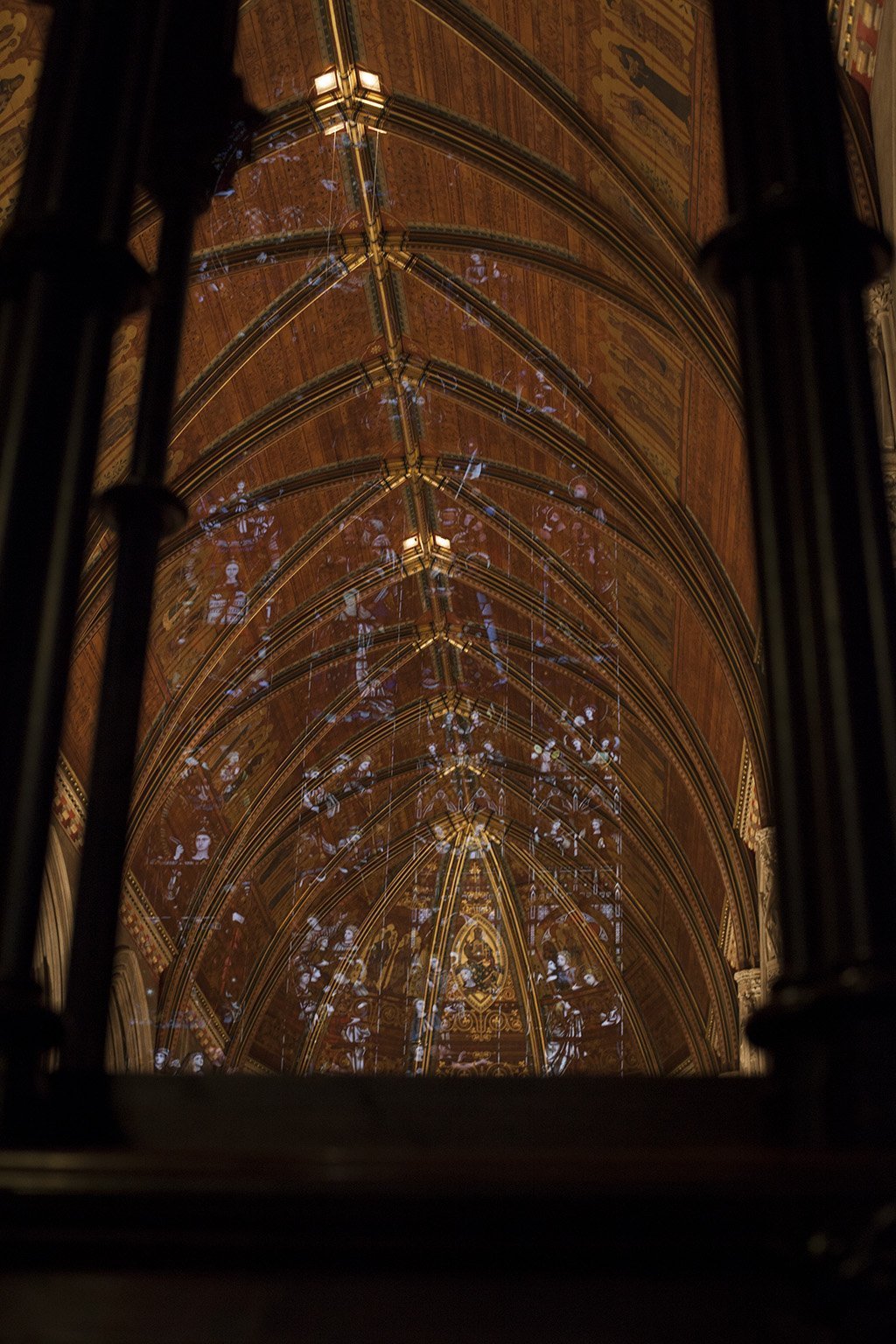 I know what I’m after–that square in the centre of the frame where the interesting pattern-clashing is going on. To get a bit music-pseudy about it, it felt like a visual expression of a cross-rhythm (where two different rhythms can be heard at the same time in the same piece of music). I want the geometric details and the emphasis of curve-against-straight, and I want to be able to pick up the outlines of the saints and all that. And I know I can bring these through in post-production. So I do.

Am I to be judged harshly for that?

One thought on “Purity”