The World Naked Bike Ride is exactly what it sounds like. In dozens of cities around the world, cyclists take to the streets for a couple of hours, wearing nothing – or not very much – to highlight a range of issues from cyclist safety to greener living. 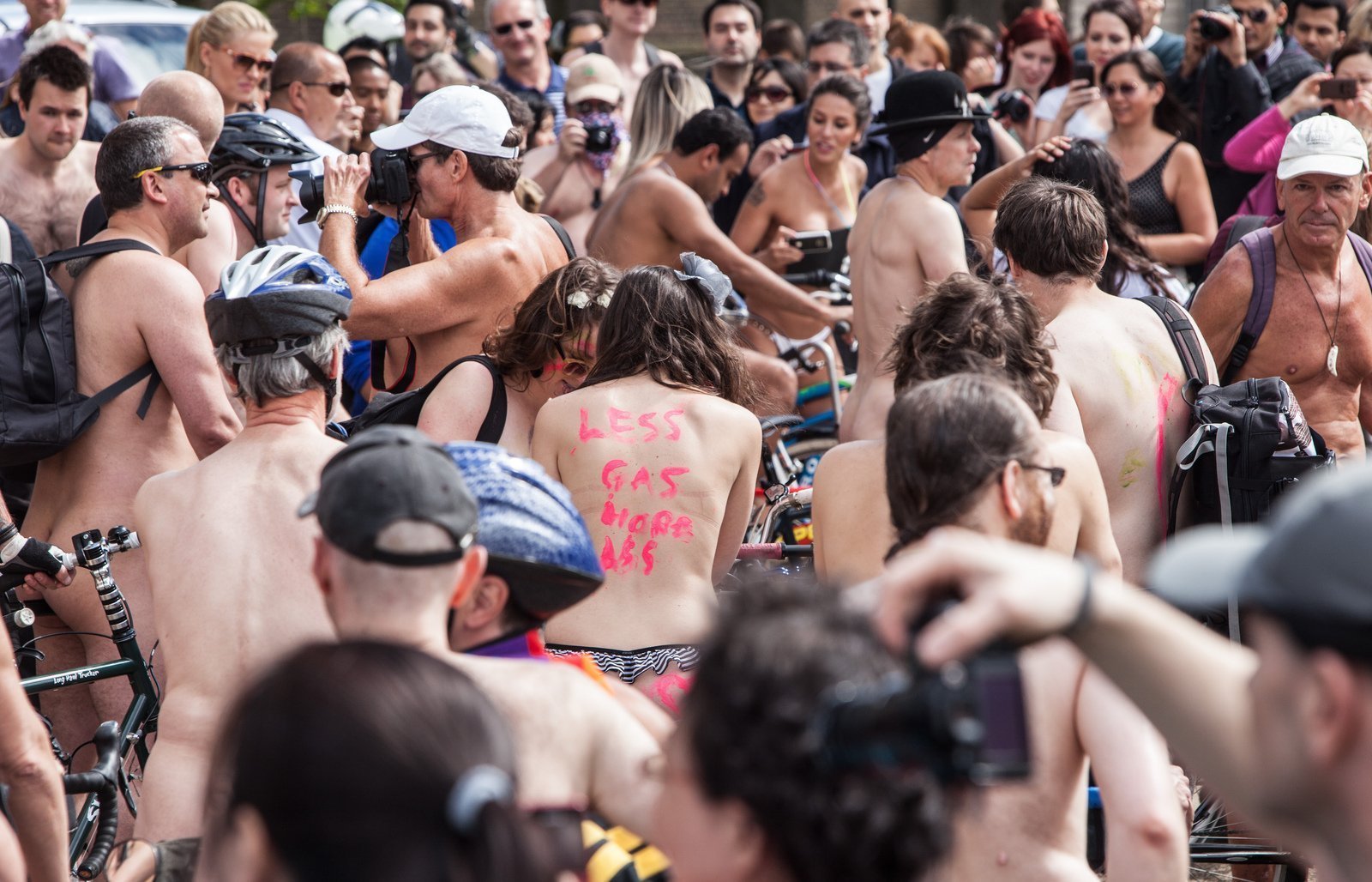 To get a full frame of naked bodies without including anything much in the way of private parts takes a bit of luck and a lot of positioning. I wanted a few that could be run in any publication or on any site, yet still convey a sense of mass nudity.

London’s ride this year was last Saturday, June 9th. As an event photography challenge it had some fascinating features: it covered a lot of ground, in an age of mass social media there would be saturation coverage and, yes, there were all those issues of ethics, decorum and plain old good manners. 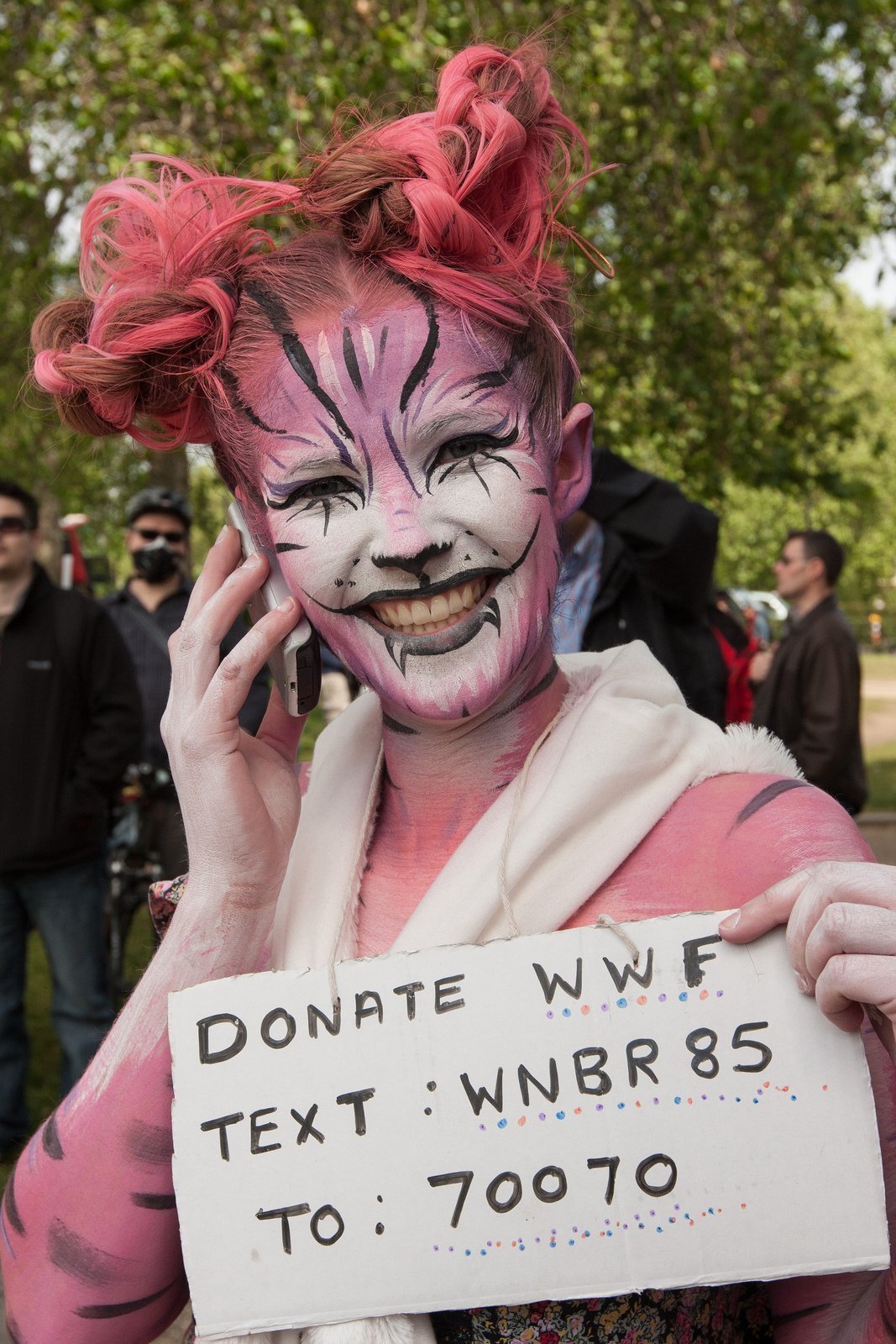 It’s not all about nudity, anyway. Great face paint and an important message stand in their own right as a strong image.

There’s a code of practice for photographers, which I tried to adhere to as closely as possible. Once the ride gets under way there is inevitably a little more latitude, as the undrawn boundary between the private act of undressing gives way to the public act of demonstration. Yet here too it was my goal to tell a story with suggestion and wit where possible, and not just rely on a parade of genitalia to get attention. In my view, careful framing to get an image past even the strictest moderation policy demonstrates skill in itself. It’s not like the internet is short of dicks and boobs anyway, is it? 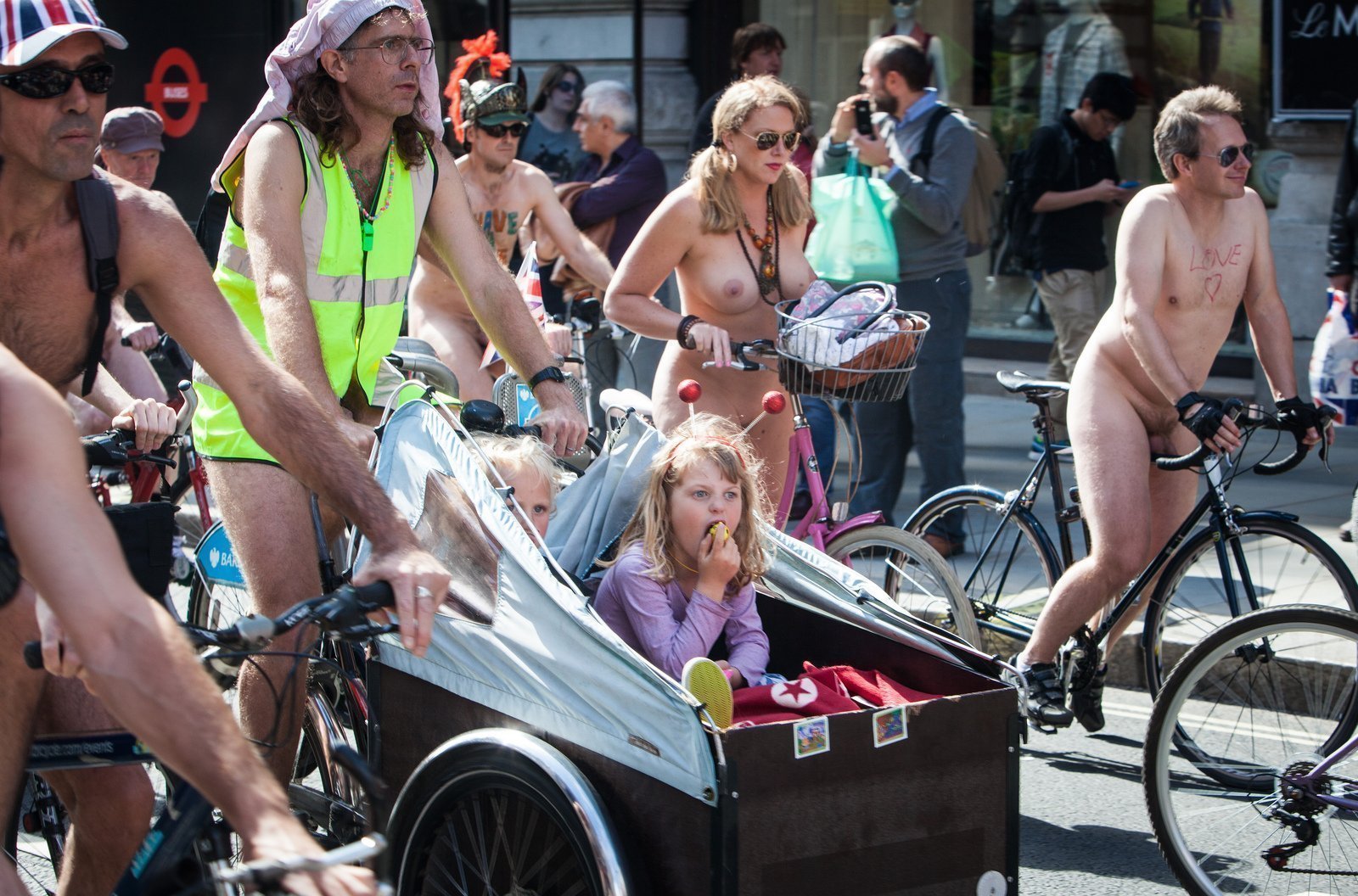 Reactions and contrasts make for great shots at an event like this. Startled bewilderment from passers-by, studied concentration or comradely cheer from the cyclists, but slightly bored faces from the kids brought along (literally) for the ride.

Being more creative than the hordes wielding their smartphones and point-and-shoots was one goal; the other was to get to a range of locations. And for that, my photo-Brompton bicycle was invaluable. It has a large front pannier fitted out with a hacked-up lens bag, giving space for two cameras and other bits and pieces – all within easy reach, even when on the move. It got me through jam-packed traffic, past the riders and able to take up any position I wanted along the route. 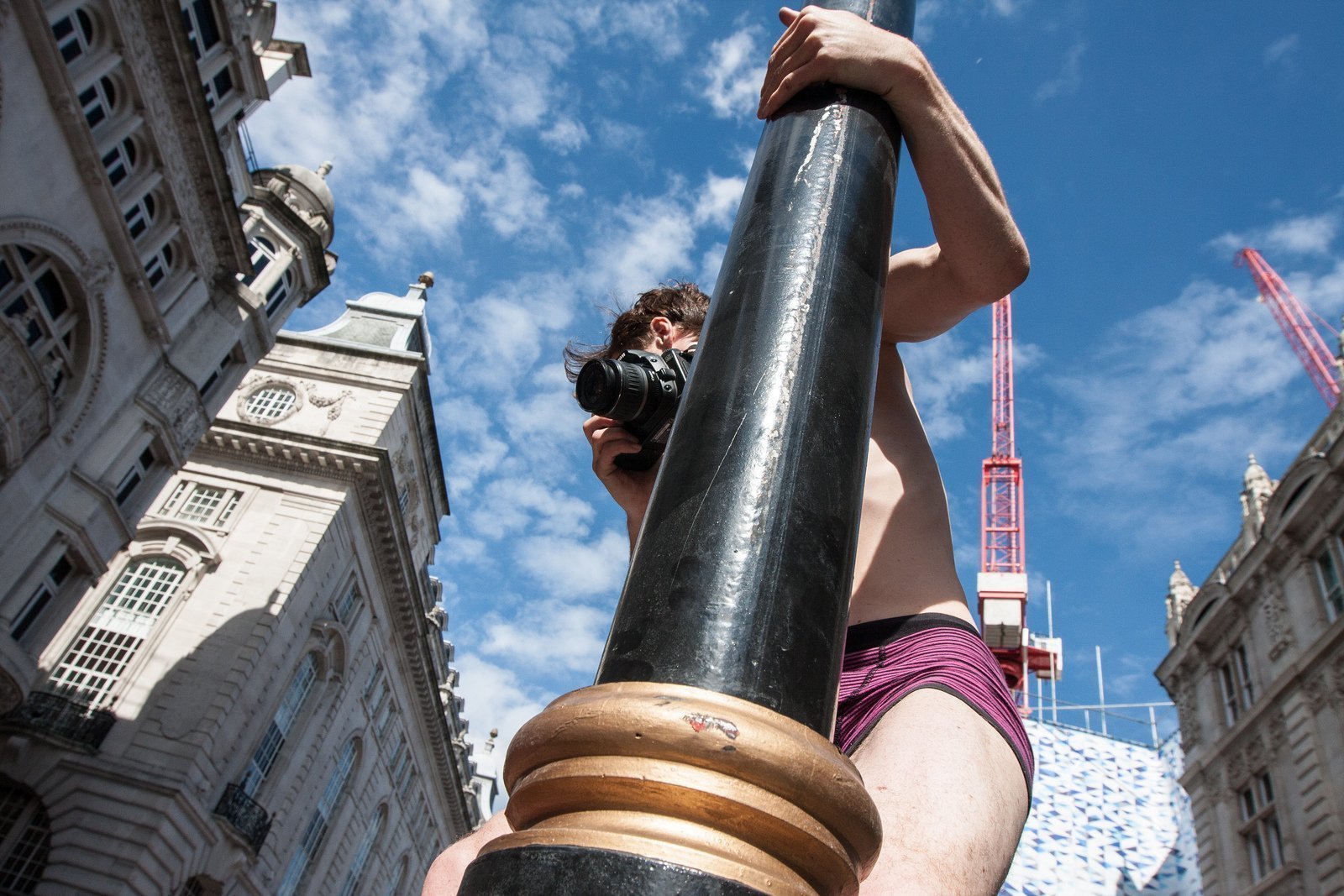 As I was parked up in Piccadilly, I saw a movement next to me out of the corner of my eye. I swung the wide angle upwards from a low angle, catching the photographer next to me – wearing a very special pair of pants. A nice twist on the clothed observer/naked participant theme.

I put a few frames out to the market for features use; we’ll see what gets used. This post contains some of my favourites from the set, and why I chose them. (That set is a subset of the full Flickr set – to see those you’ll have to click through to Flickr itself, and be signed in. Flickr takes the issue of self-moderation of content seriously, and so do I.) 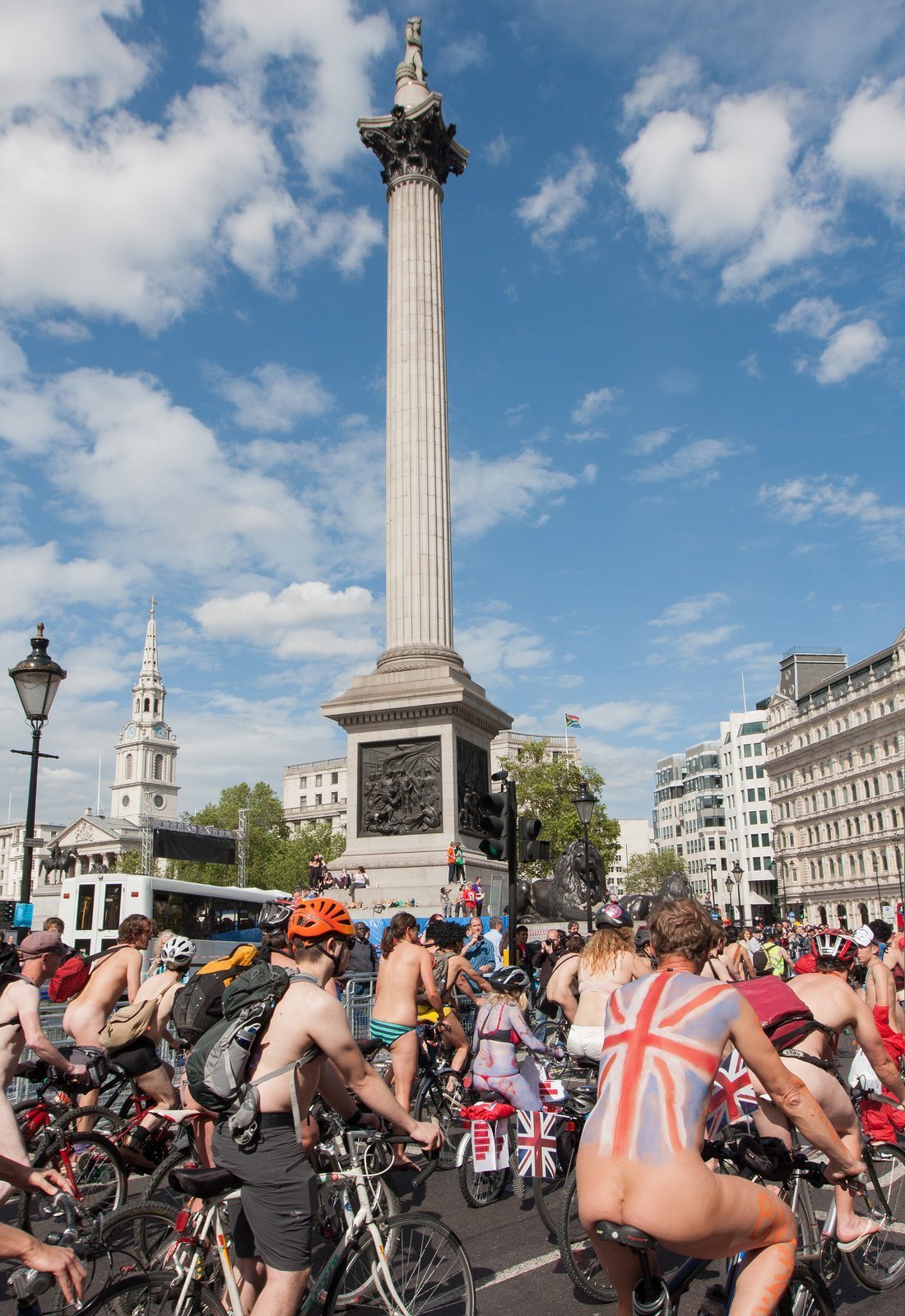 The height of Trafalgar Square’s main feature made for an interesting framing challenge, as did a wait for a suitably iconic foreground subject to get into position. 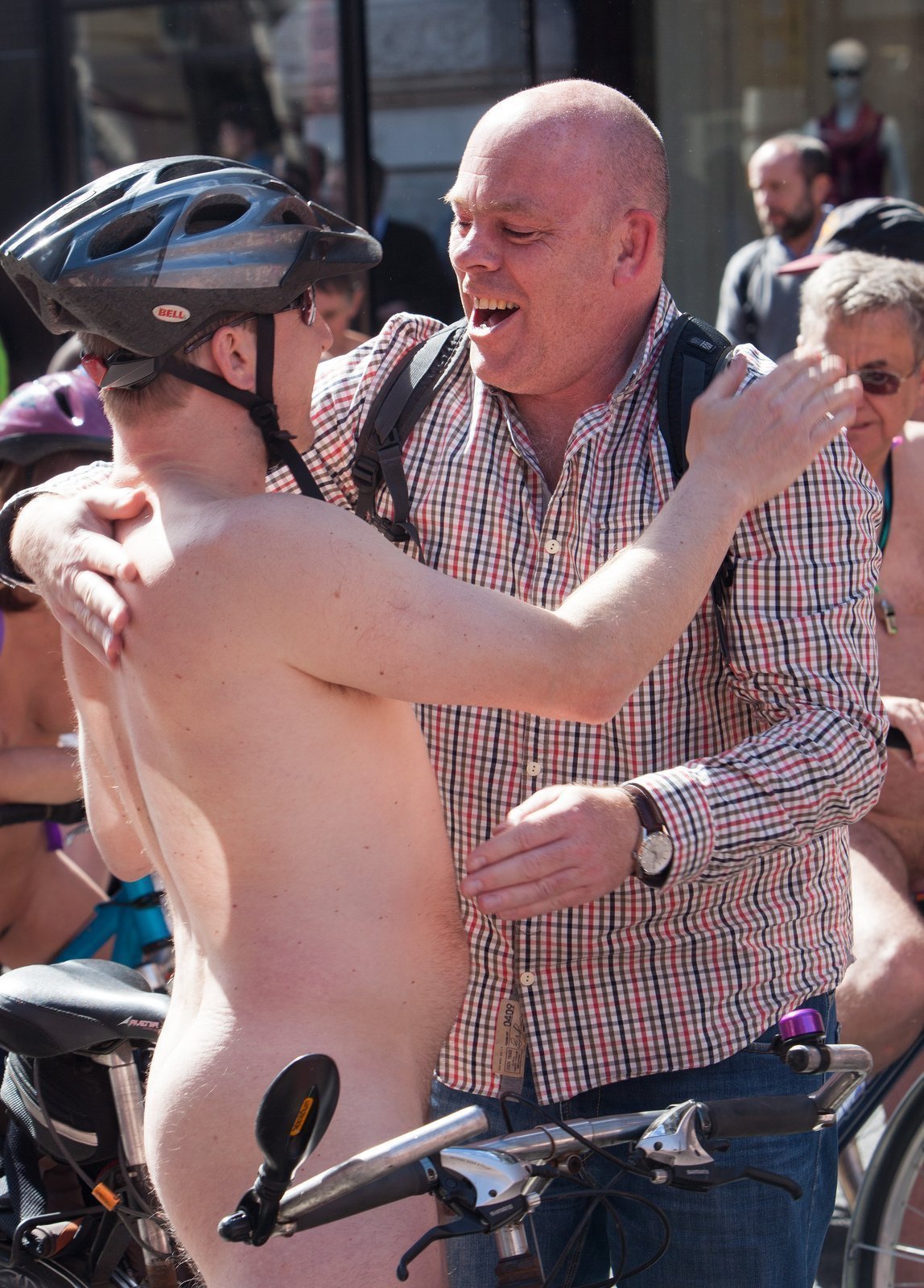 A very lucky juxtaposition. Big bloke on pavement spots his mate in the middle of the ride. You never saw a manhug done with such instant ease, followed a split-second later by that mutual “whooaahhh” as their asymmetry became apparent. 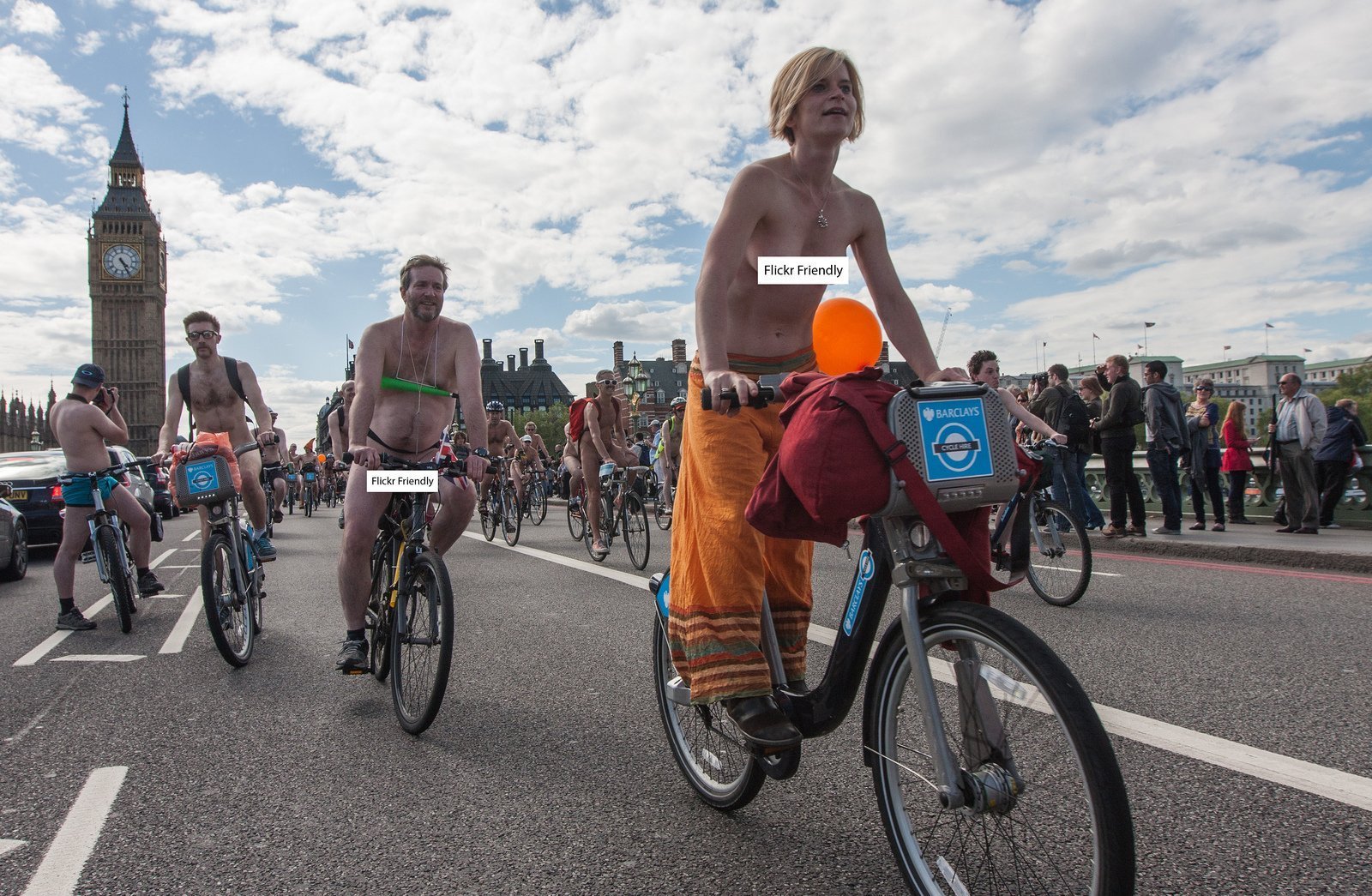 I had to aim for the classic Westminster backdrop – Big Ben (yeah, yeah) in shot, with the ride coming toward me at speed. This took a lot of hard pedalling to get ahead and into position. A big press pack had set up about a hundred yards nearer to Parliament Square – they were obstructing the flow of the cyclists which I guess made for a less fluid image. Being mobile, I could travel the extra distance and have all the space I wanted. I’ve shown a version here that was made “Flickr Safe” to reach a wider audience. 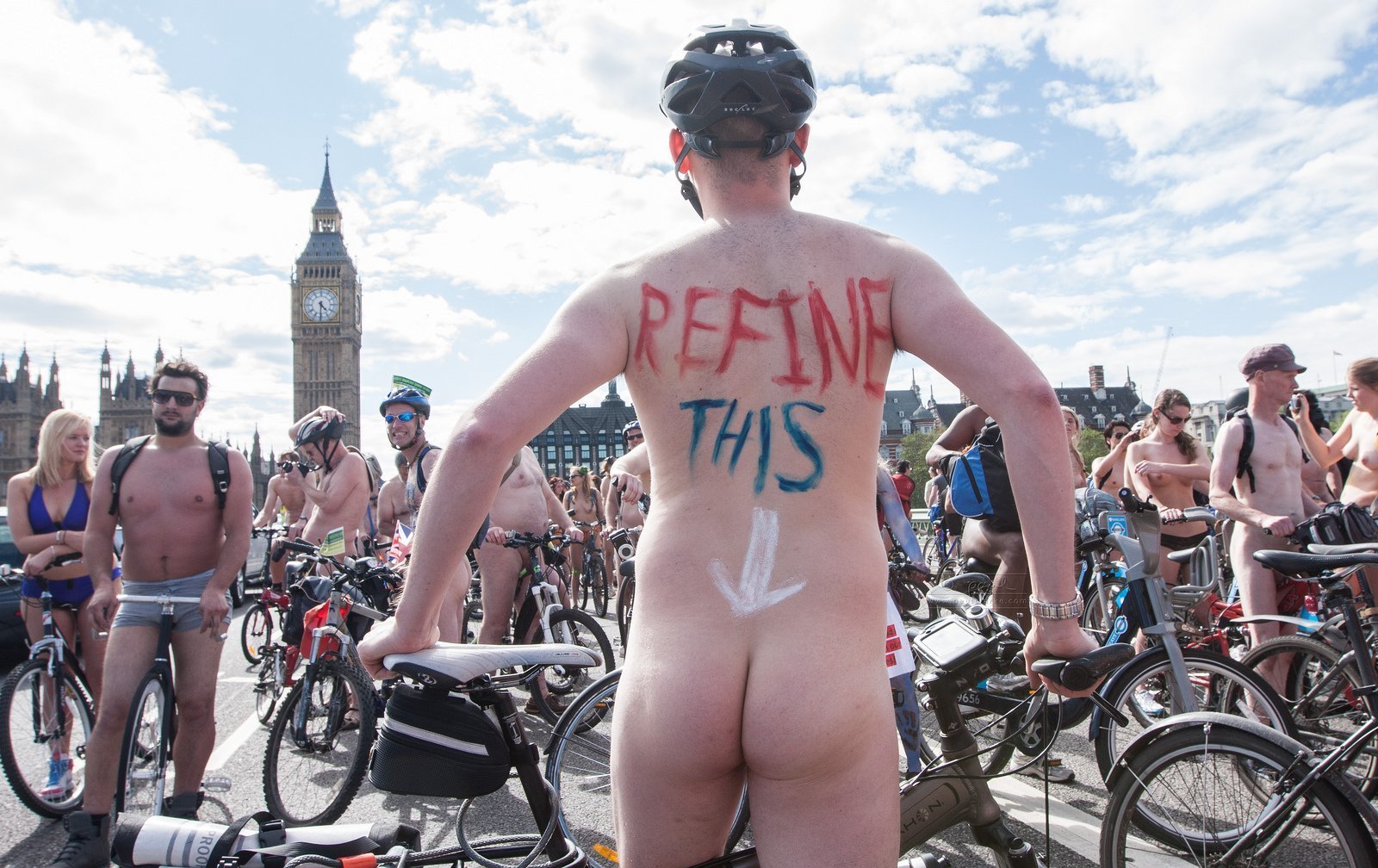 I think this is my favourite. The cyclists had stopped for a photo-opportunity break on the bridge. I saw this great slogan bodypainted on a guy in the middle of the pack. I asked if he’d be happy to do a posed shot next to the Clock Tower (happy now?) – he was absolutely delighted to.
(Clicking on these pictures should open them up in a lightbox–you can then use arrow keys to jump between them.)