After a lovely shoot last week – the last one in my sequence for Mozilla – my mind has been on the art of event photography in what might charitably be called “extreme lighting conditions”.

Photography without a flash is sometimes called “using available light”. So what happens when what’s available is scarce to say the least, and what little there is has huge variations in intensity, and some complicated colour issues to boot? The answer comes down to using the right equipment, and having a few editing tricks up your sleeve. 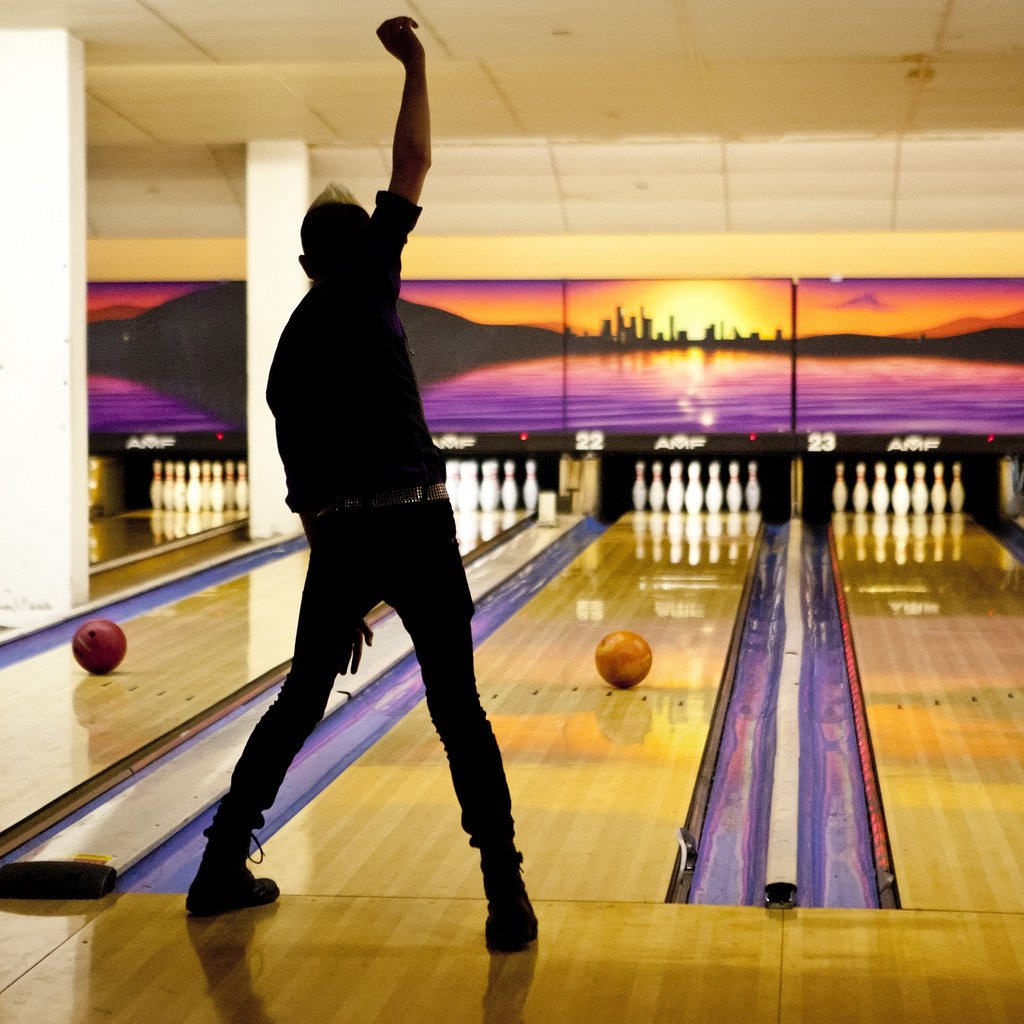 Strong, sharp shapes are your friends in low light. With bowling, you get clear warning that a pose is coming: so I shot for the silhouette; sacrificing detail in the bowler to retain contrast and richness of tone in the background. Traditionally, you deal with a backlit subject by brightening the exposure (typically by keeping the shutter open for longer). The subject will be bright and visible, but you lose the detail of the background as it becomes a sea of brightness. But here, I made a virtue of the silhouette. I used this technique on a few frames from this set.
Exif*: 70mm; ISO 3200; f/2.8; 1/320

But what’s so bad about flash? Many, many events, indoor and outdoor, are shot with flash. Outdoors it can help to even out shadows, especially on faces, that might be caused by harsh sunlight. Indoors? Often it’s the only chance of getting a focused image at all. But it can be very intrusive – I’ve been to events that have been ruined by the hired snapper blasting away continuously, distracting the audience, unsettling the speaker, or making guests feel very “watched” all the time.

And with an image like the one above, flash would have lit the detail of the bowler, but at the cost of the background fading into darkness. 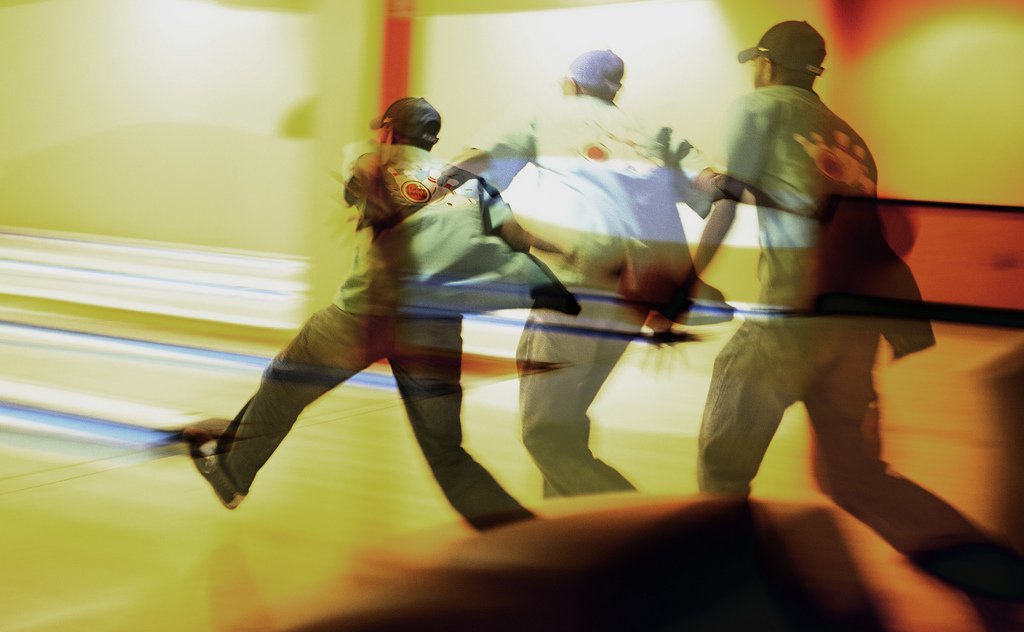 Of course, the predictability of the bowler’s action can become boring. Here I spiced things up by creating a “fake multiple film exposure” using filter effects, and the careful layering in Photoshop of three partially-transparent images taken in quick succession.
Exif: 30mm; ISO 2500; f/2.8; 1/25

So what do you need? Firstly, have a great sensor in your camera. I use a Canon 5DMkII which has a full 35mm-size sensor capable of very high quality images even at high ISO numbers (that’s the setting controlling how sensitive the sensor is to light). The upside of a high ISO is that you need to let less light on to the sensor to get a suitably bright image: the downside is that, being sensitive, the sensor is prone to capturing “noise” – unwanted rogue information in the form of little grains of colour and texture.

For this shoot, my first move was to set a high ISO – often I use 1600 indoors, but this bowling alley was so extreme that 3200 was in order. Fortunately the 5DII is pretty noise-free even at this setting. Some images – particularly those with a lot of dark areas – are more prone to noise, but software can help remove this. I use a plug-in to Photoshop, called Noiseware, to remove the worst cases. 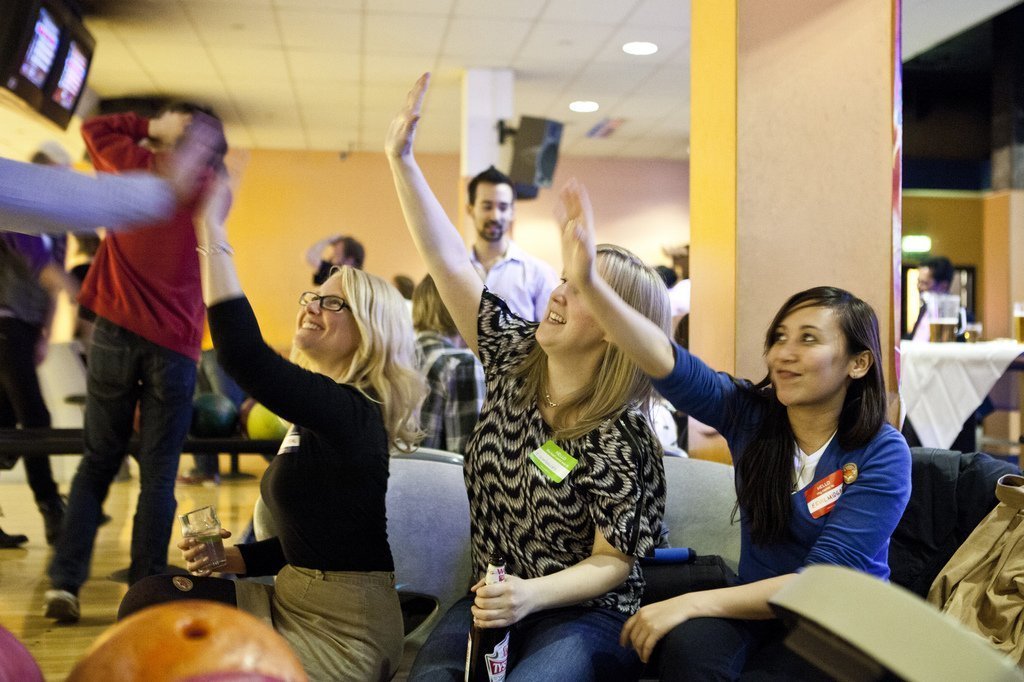 Another stock bowling moment is the high-5 after a strike. Catch the moment, and everyone looks amazing. But all is not what it seems here. Two of the three faces looked great, but at the slow shutter speed one was horribly blurred. That’s where the motor drive and the click-click-click (usually three times) comes in. Three quick exposures maximise the chances of getting each face to be still on at least one of them. Then just replace the blurry face with a better one – simple Photoshop cut-and-paste.
Exif: 40mm; ISO 3200; f/2.8; 1/25

Secondly, use better quality lenses. These will tend to have wider apertures (the physical hole that lets the light in when the shutter’s open). Obviously, this lets in more light, meaning that you don’t have to keep the shutter open as long to get a bright enough image, and you therefore cut down the chances of you or your subject moving and blurring the image. They also have higher quality glass, reducing distortion of shape and colour within the lens itself, and allowing light to flow freely and precisely into your camera. (Because they allow you to take a faster shot for the same brightness, they’re sometimes called “fast” lenses.) 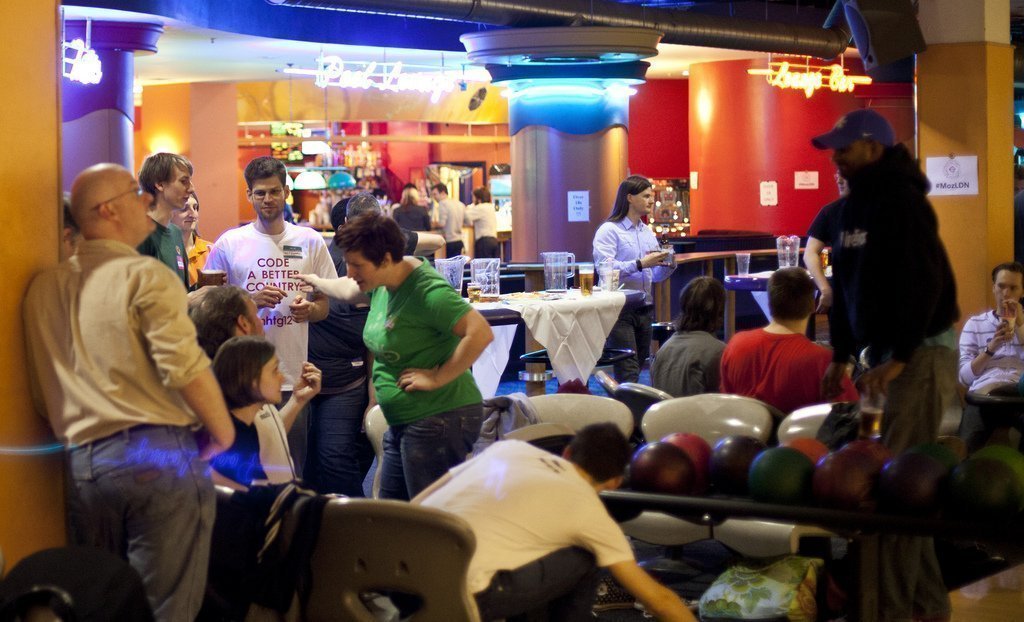 Colour gets tricky in low light. There are various ways to control “white balance” – the colour that the camera interprets as being a nice white white, not the yellow light of lots of incandescent artificial lighting. It can be adjusted before or after the shot’s taken, but bringing it right down to the “blue” end can bring even a garish, yellowy cellar back to something looking more natural. Our eyes and brains make this compensation over time if we’re actually at the event; but without this advantage, looking at a photo from cold, who wants to see a bunch of jaundiced faces in an orange room?
Exif: 50mm; ISO 1600 (I’ve switched to a faster f/1.4 lens); f/1.8; 1/80

Thirdly… well that’s where you need a big armoury of camera set-up, shooting and editing techniques… This post isn’t a “how to” of low-light photography (that’s a book, not a blog post – or you can come on one of my courses), as much as a few examples from this shoot of what I found, and how I dealt with it. Hope it’s a useful insight into this type of work. Next time you see Annoying Photographer running round an event blasting away with a flash, think how different it could be… 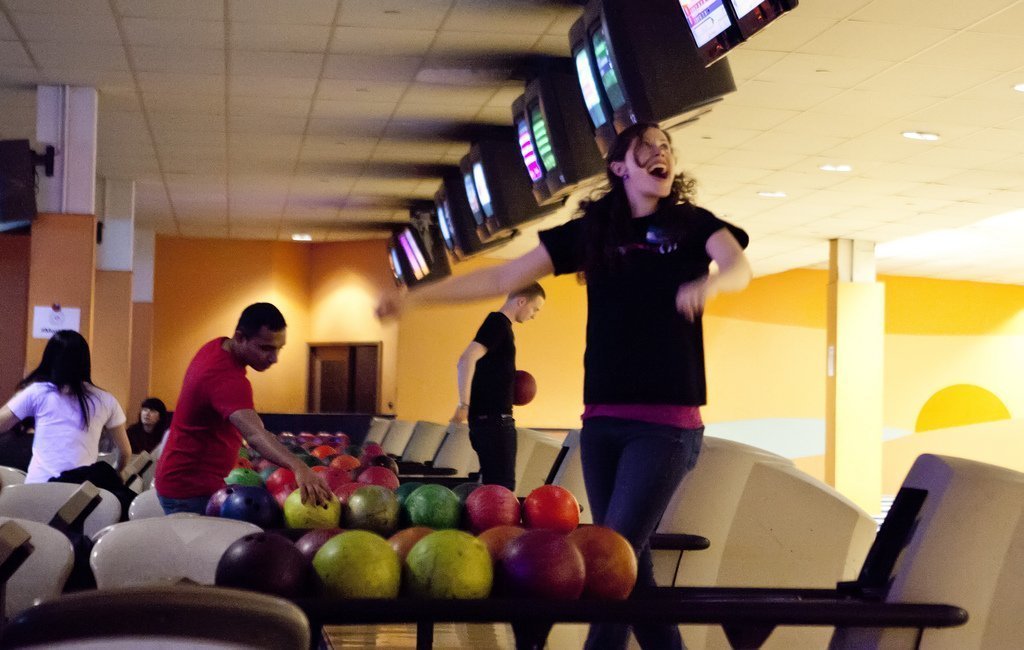 I knew there was a great frame here, but it was underexposed (the perils of shooting in a semi-automatic mode for greater speed – yet another photography trade-off). In post-production I lifted the exposure, corrected the colour balance, removed the unwanted noise and used a little sharpening to bring out the facial expression.
Exif: 70mm; ISO 3200; f/2.8; 1/100 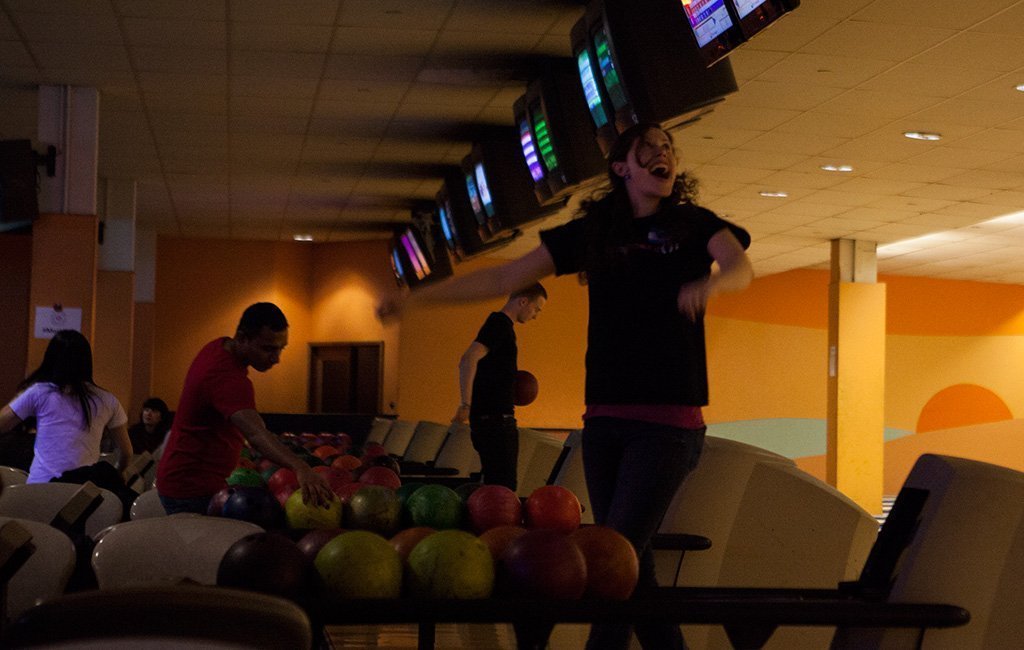 …and you do have to work on the editing – this is what it looked like before those adjustments. So when your photographer tells you there’ll be more work involved in completing a job shot in poor light, believe them.
(Clicking on these pictures should open them up in a lightbox–you can then use arrow keys to jump between them.)