I’ve had a few requests to say a bit more about the technical aspects of event photography, so this post digs into the settings a little, and also says something about how and when I bring flash into play.

One of London’s greatest tech events must surely be the Digital Sizzle series. Now up to No.11 of the big bash parties, this was one was held last week in a mostly-vacant office building just off Brick Lane. The unfinished nature of the place, as well as its multi-level architecture, made for some great shots – though the rawness reared its head unexpectedly half-way through, as we shall see…

I travelled very light for this one; only two and a half lenses with me, and two 5DIII bodies. The bags on my thinktank belt carried flash pack, batteries, memory cards and unused lens. The rest on my shoulders. It was dark, hot and fast-moving; no place for lugging too much around. Lens choices were a little unusual, in that I left a gap in the middle. 16-35 for wide angle and group shots; 70-200 for sniping from a distance. The half-a-lens? My adored 40mm f/2.8 pancake. Tiny, unobtrusive, and devastatingly effective, from portraiture to wides.

The two camera bodies are identical in every setting, and also synchronised to the second (as were Tracy’s – co-shooting the event with me). When it comes to bringing all the images together in the edit, the combination of shots from different angles at the same second can be very powerful – and a pain to match up if the clocks aren’t in sync.

The three lenses all share the common feature of having an f/2.8 maximum aperture throughout their entire range. This can be pretty handy. Having got the exposure settings right, but wanting to change range, the new lens works exactly as the last did – whereas lenses built with different apertures can cause a bit of jumping around by a stop or so, if the new one can’t match what the old one could achieve.

So here’s a dozen of my favourites, with some notes on the how and why… 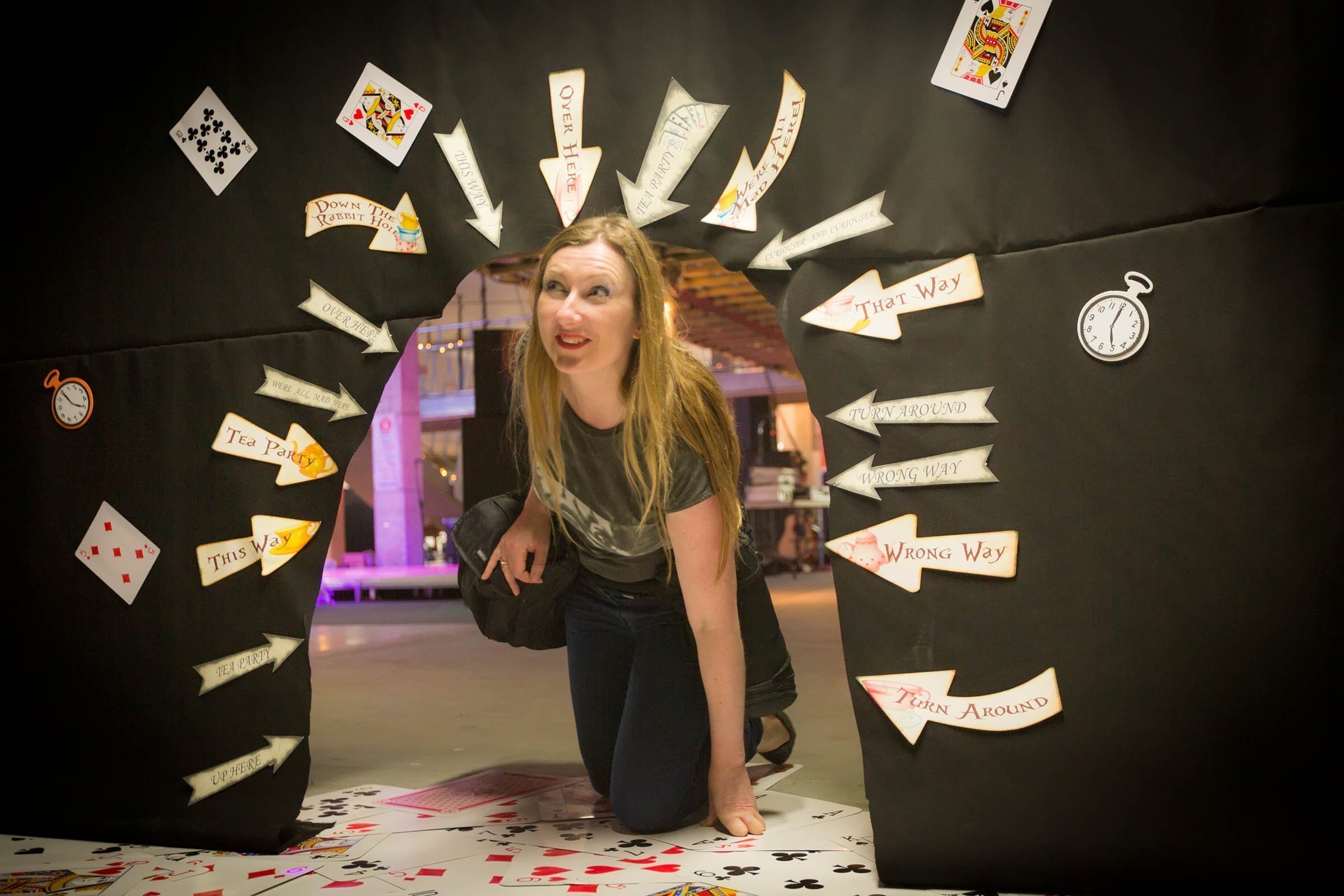 A brilliant entrance for a brilliant event. As co-shooter Tracy (aka @pixelvixenuk) tried it out, I didn’t want to flood the scene with flash, as it wouldn’t flatter face or black curtain surround, and would completely demolish the ambient light from the venue behind. Relatively wide-angle, pretty close to subject.
Exif*: 35mm; ISO 1000; f/2.8; 1/125 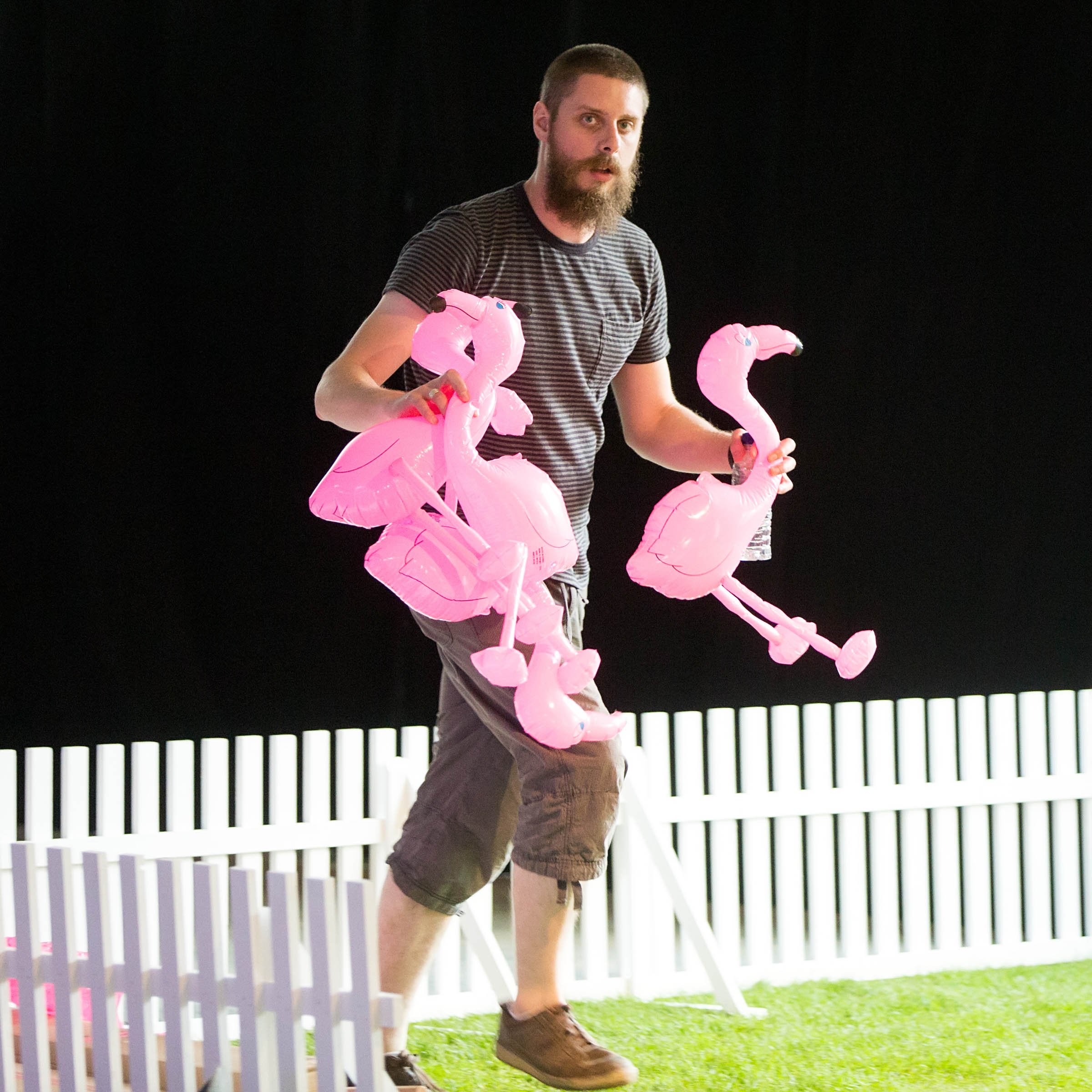 The man himself – a third of the 3 Beards – clutching inflatable flamingos. Perfect for a long-distance, quick-reaction stealth shot with no flash and the big telephoto. A face looking as guilty as it should.
Exif: 125mm; ISO 3200; f/2.8; 1/160 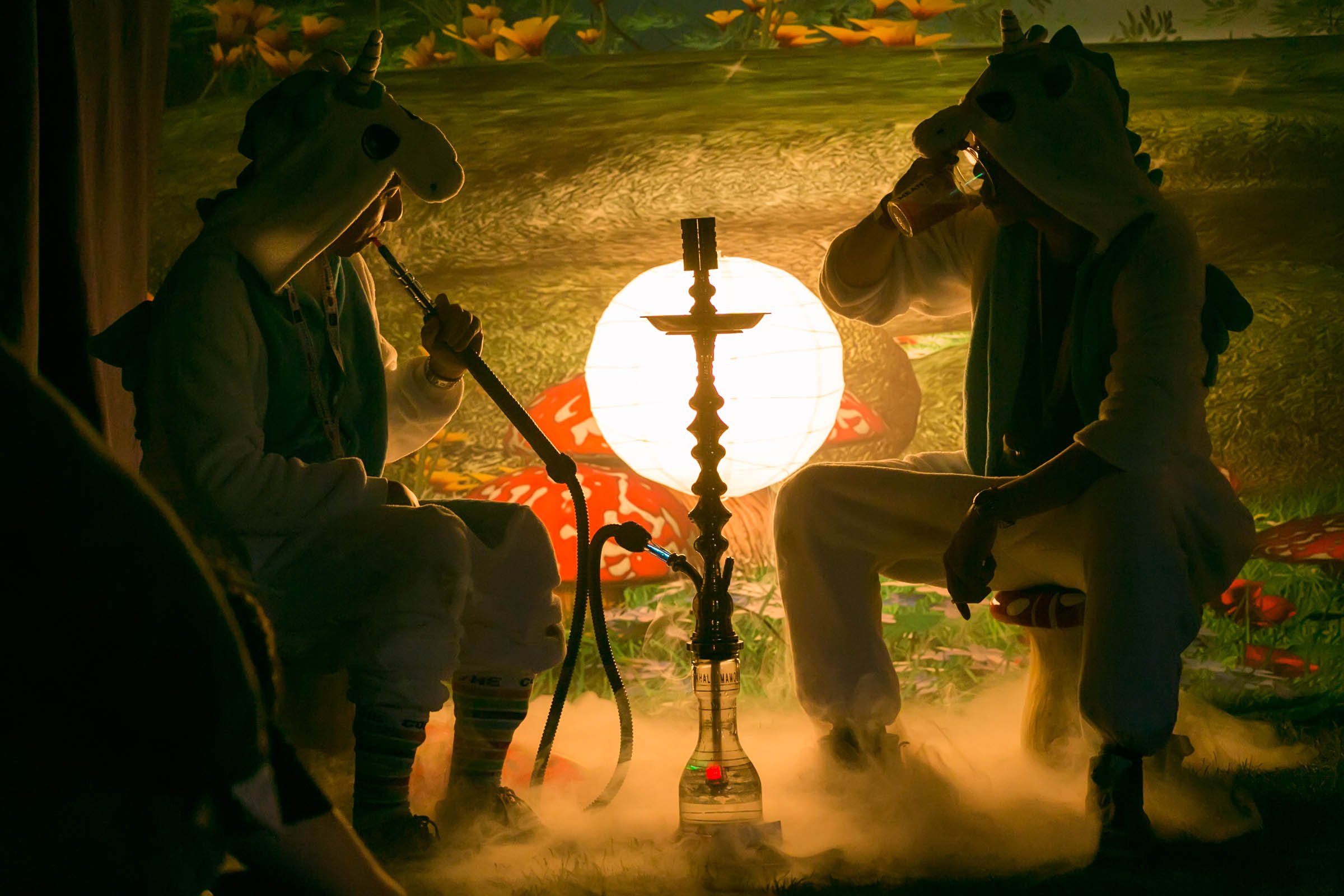 One of the defining shots of this event. A dark shisha bar, and I stumble on two guys dressed as…unicorns? I think. Anyway, camera was set up on a general no-flash set of manual settings – the 5DIII is really comfortable up to ISO3200 (don’t try this on a hobby camera) so I flicked it down a notch, then cracked the shutter speed up to make sure I got firm dark silhouettes against the moody fog. Underexposing a little like this kept the atmosphere there; that swirling detail would be lost with a slower shutter. Again, no need for flash – what light is there works perfectly.
Exif: 105mm; ISO 2500; f/4.5; 1/320 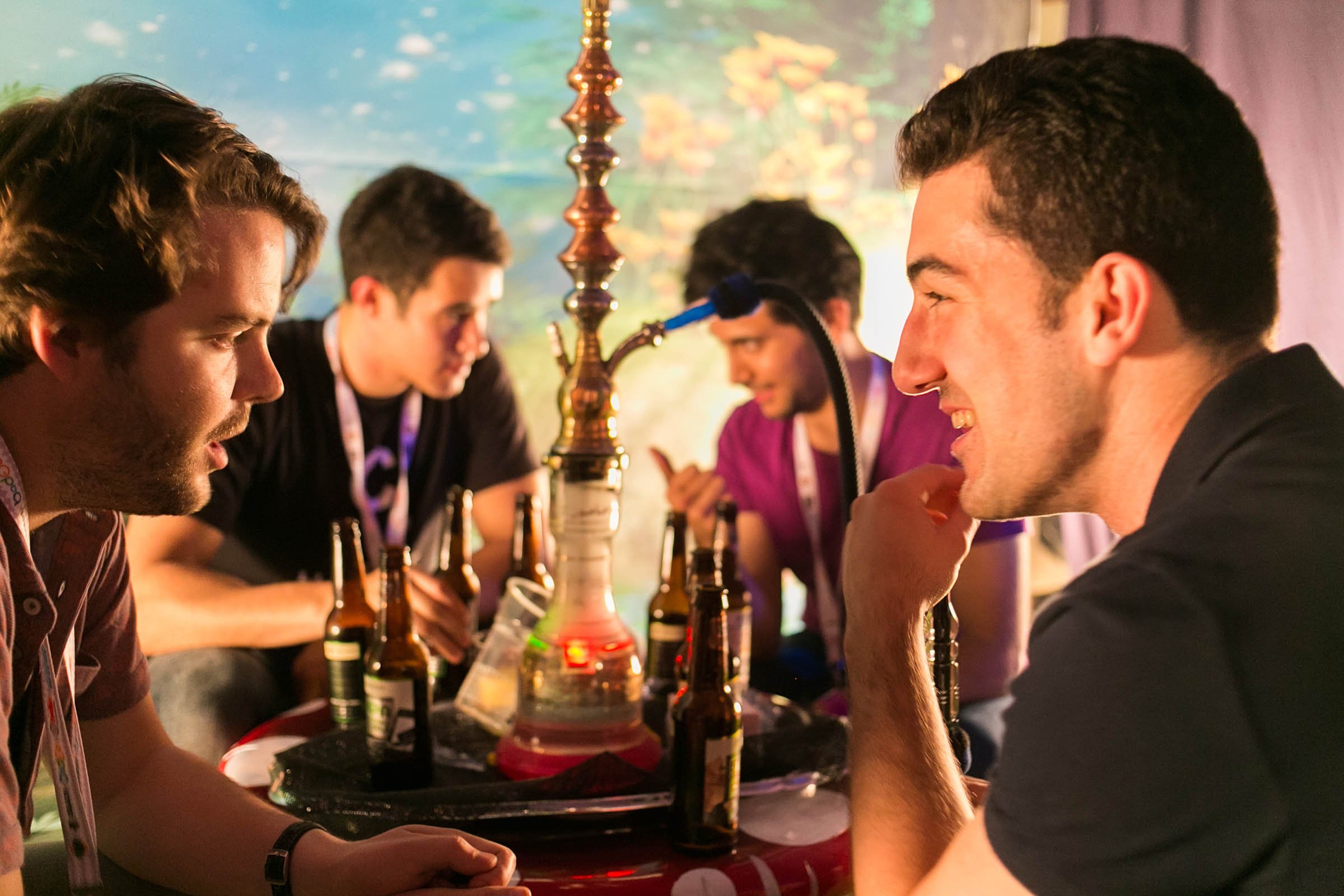 A really unusual shot, this one. This is where the 40mm pancake excels. Nobody is remotely aware of it (it’s less than an inch thick). The room was incredibly dark and it was hungry to feast on any light it could find. The settings are quite extreme – with ISO as high as is comfortable, aperture thrown fully open, and shutter ridiculously slow. Shot from the hip, which also helps with the steadying that’s required at this sort of shutter speed.
Exif: 40mm; ISO 3200; f/2.8; 1/15 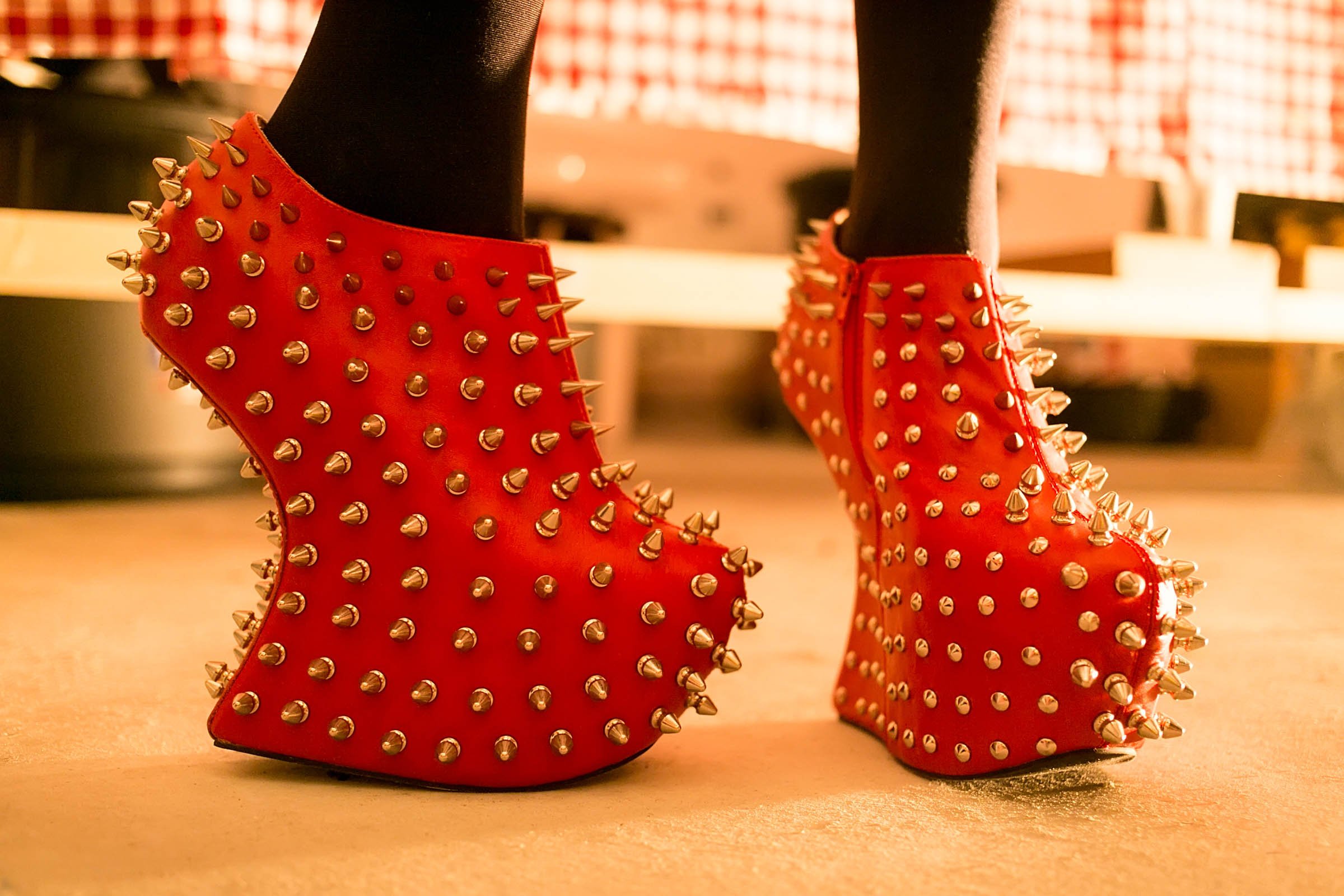 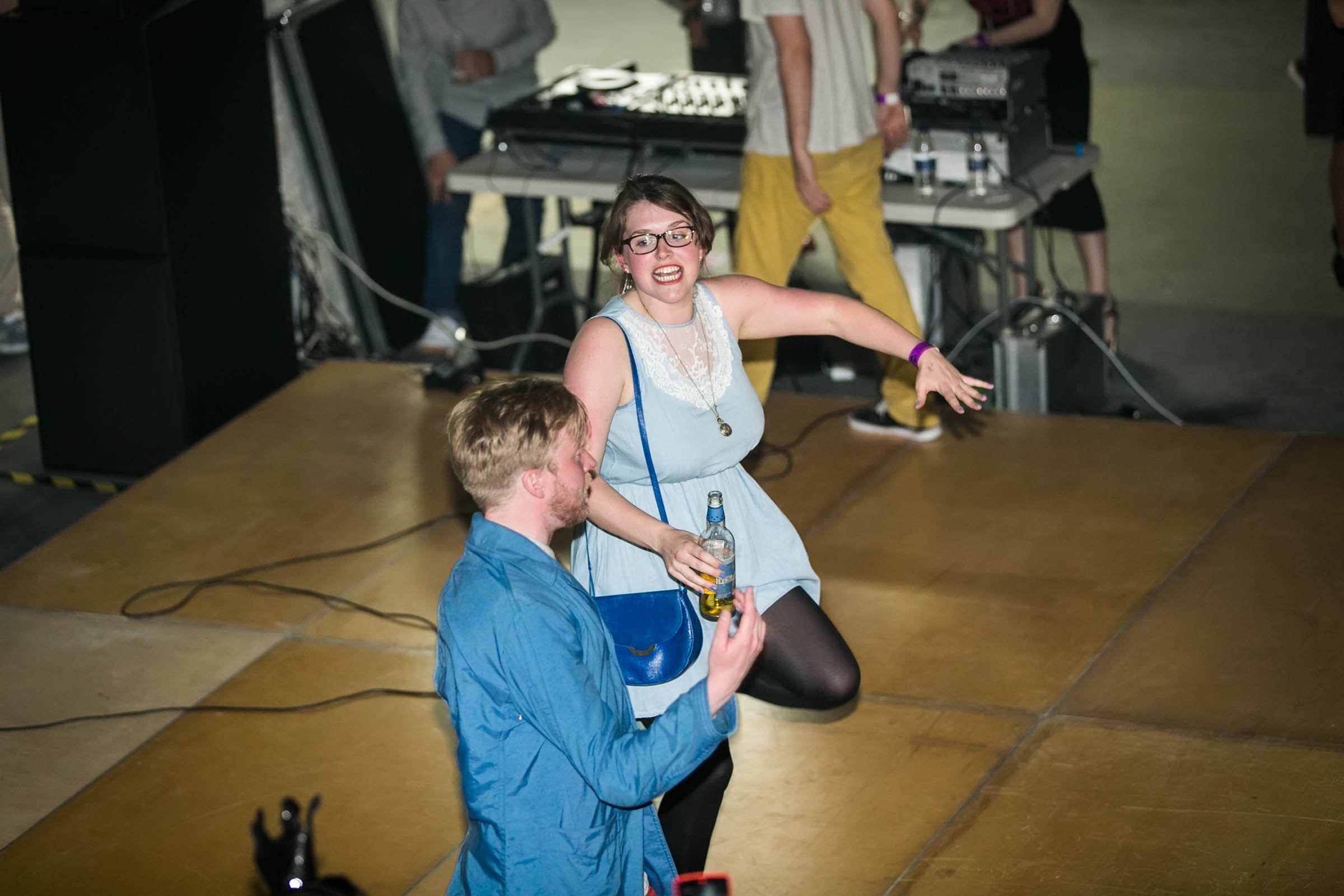 This is not, by any stretch, a technically brilliant picture. But the moment… The power had just failed in the venue. Entirely. I was working in darkness, relying on the flash to find anything. Vicky – another of the beardy hosts (don’t ask) – was doing her level best to keep a smile going as she danced to entertain the restive guests. I think it was dancing. Whatever it was, I’ve never seen the like before. Not much flash used at this event, but a necessity here.
Exif: 110mm; ISO 1600; f/2.8; 1/100 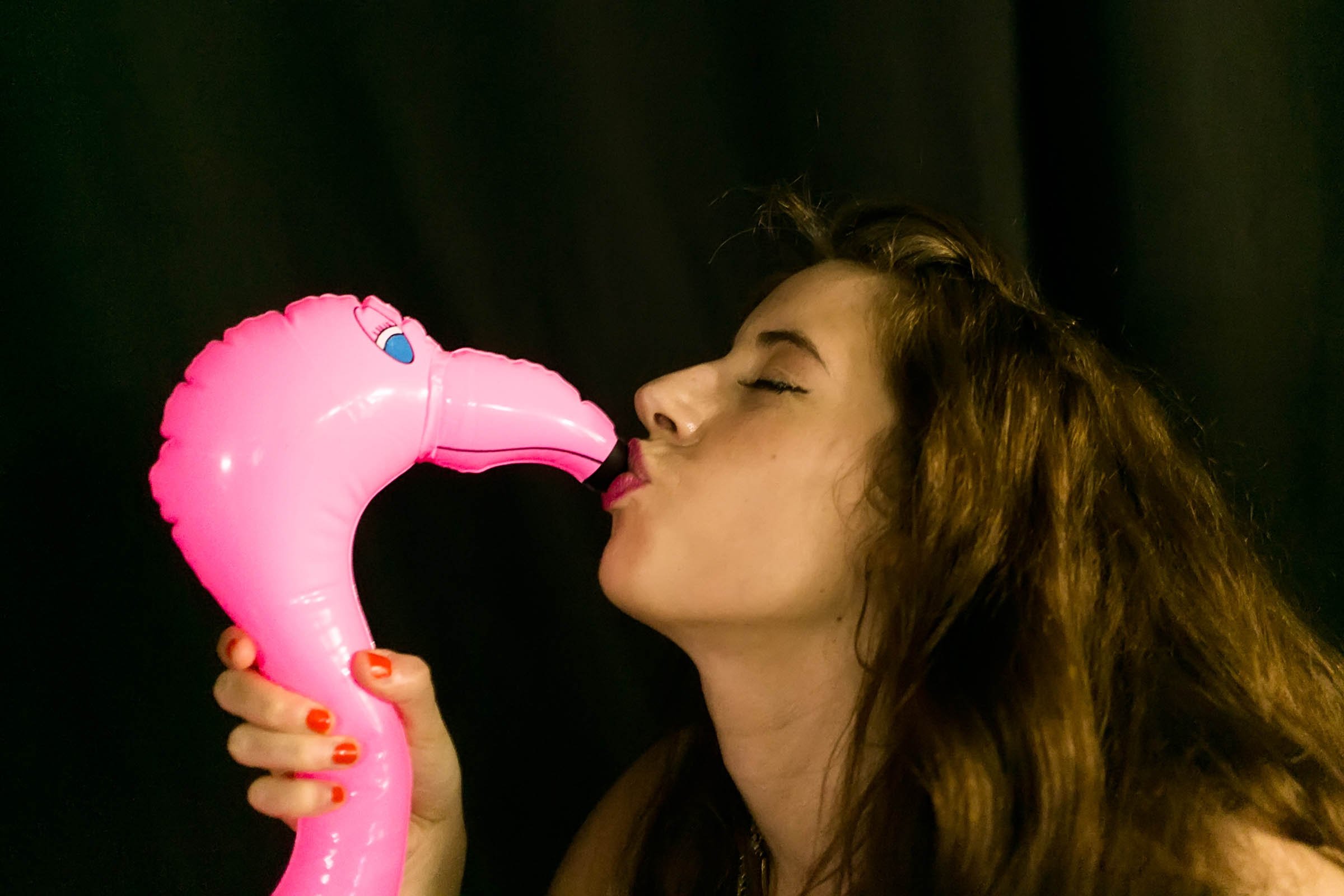 I had to get a strong portrait with the flamingos. I wasn’t quite prepared for the sucking thing, but… Flash would have killed the intimacy – we were still in a very dark corner of the venue – so I took the ISO to a frightening height of 5000 (later compensated for by using the Noiseware plug-in for Photoshop) and slowing the shutter down to something you’d never contemplate for an action shot, but perfectly ok for a static portrait.
Exif: 40mm; ISO 5000; f/2.8; 1/20 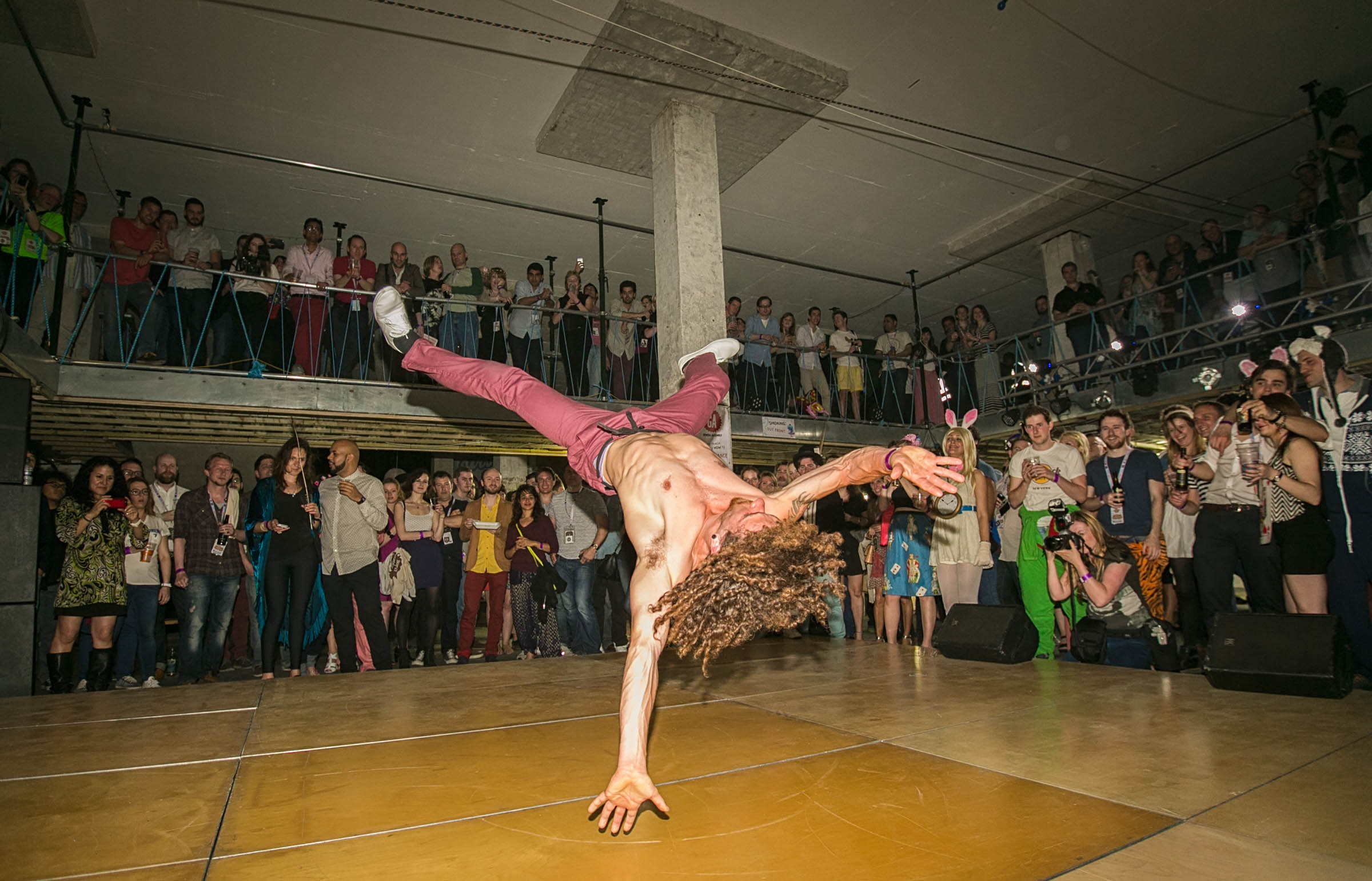 One of the BIG action shots from the night. Incredible breakdancing, and impossible to freeze without a hefty dose of flash. Shot nice and wide to really set the context. Note how the settings still allow for ambient light to come through (and not just burn out the subject against a dark background) and the shutter speed at its maximum sync speed of 1/200 of a second does its job perfectly. He’s. Off. The. Ground.
Exif: 16mm; ISO 2000; f/3.5; 1/200 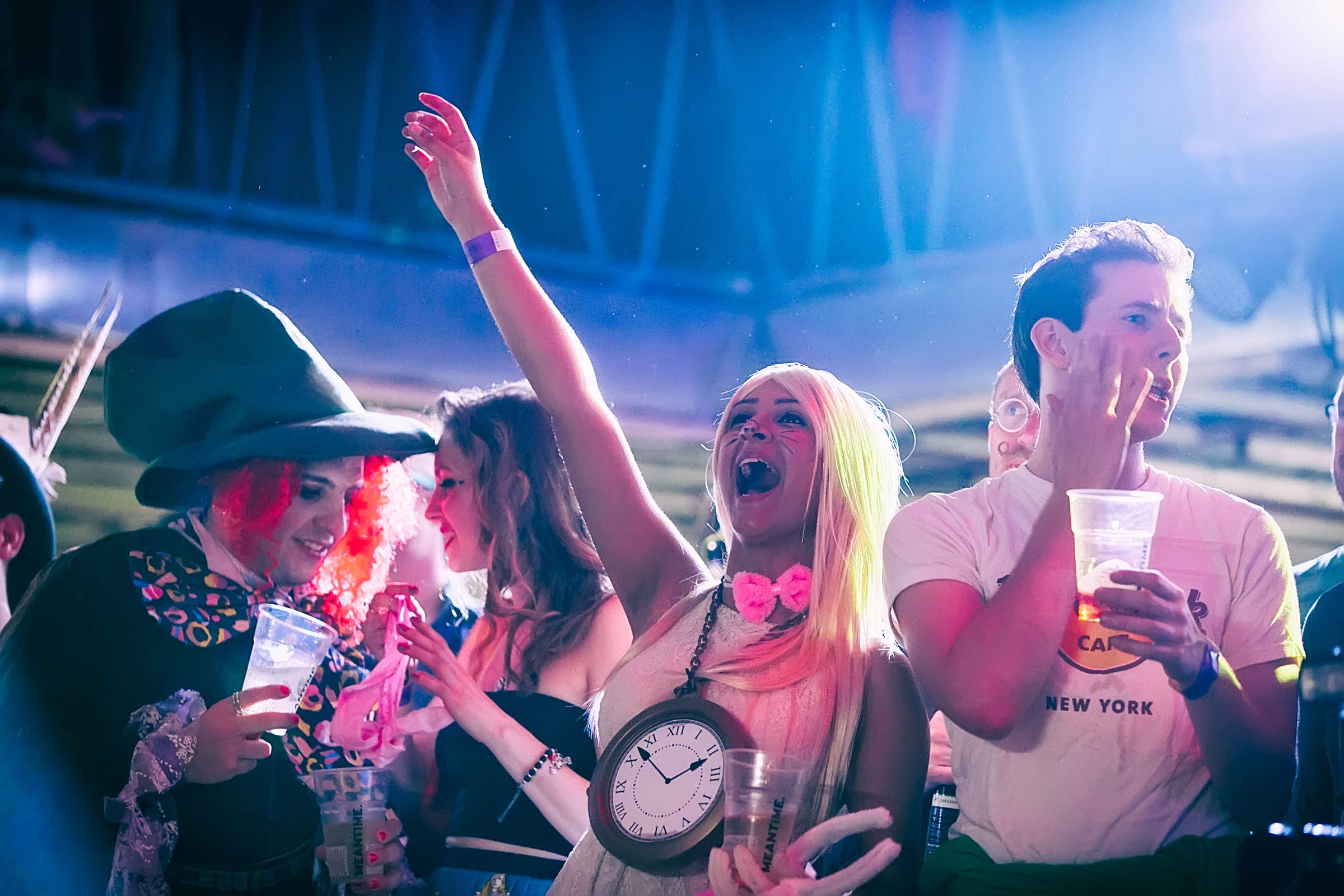 …And immediately swinging to the crowd to get the reaction shot with the longer lens. No flash here – although dark and moody, there’s plenty of beautifully coloured light to make a strong shot. Flash here would just wash everything out completely (compare it to the previous photo to see what flash does to the colours). Shutter needs to stay fairly fast (1/160) though as everyone is going crazy. Unsurprisingly.
Exif: 125mm; ISO 3200; f/2.8; 1/160 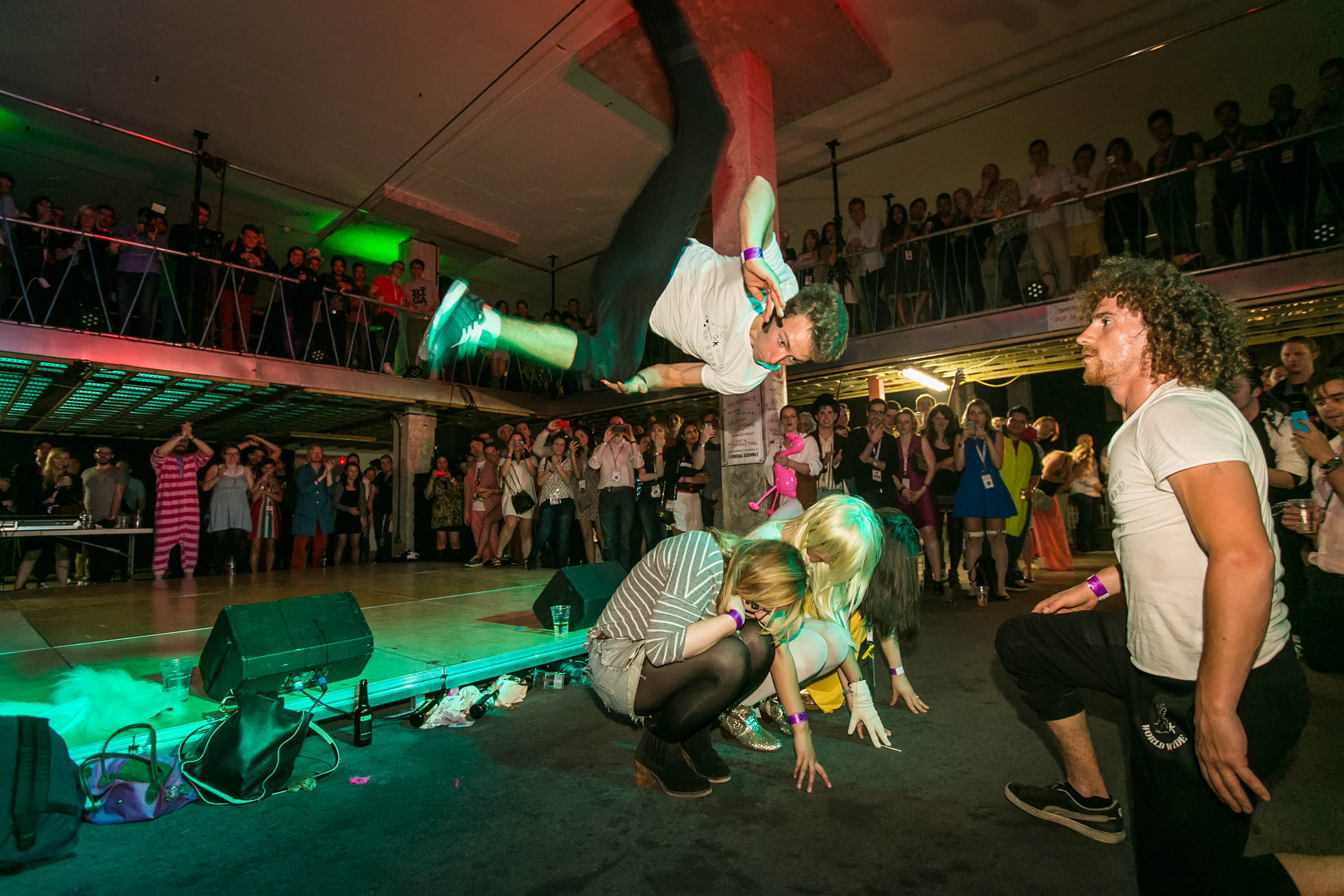 Another stunt from the acrobats – as guests crouch on the floor (not entirely sure of what’s going to happen, it has to be said) – I get straight into position. Low. And as wide as possible with the 16mm end of the wide zoom. Requires perfect timing, but here, as good as I could have wanted – with the flash completely freezing a sharp face of the flying guy. Very happy with that one.
Exif: 16mm; ISO 2500; f/4.0; 1/160 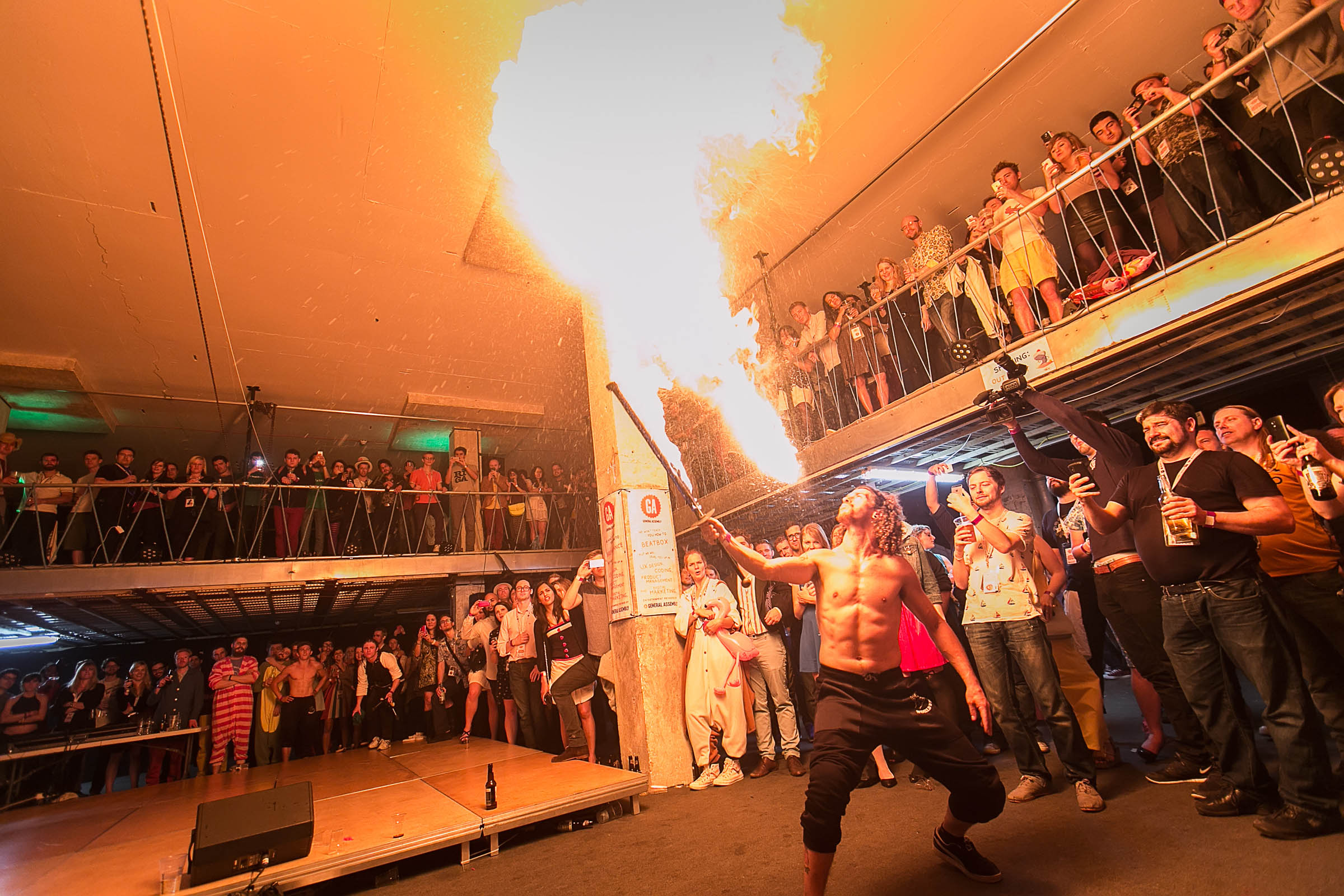 More action – but very different in character. This is about FIRE. Which means BRIGHT LIGHT. Again, flash is to be avoided as it would wipe out all that warmth and character, though it is less risky in some ways in terms of what might be captured. Suddenly the scramble is on to avoid flooding the entire image with the flare. It’s hard to judge, because the flare is so brief, but a couple of sighting shots in earlier fire-blows, and it’s just about right. Even then the intense heart of the fire needs a bit of taming in post-processing, but the overall impression of heat remains. Especially on Sanford’s face. Which I love.
Exif: 16mm; ISO 2500; f/3.2; 1/160 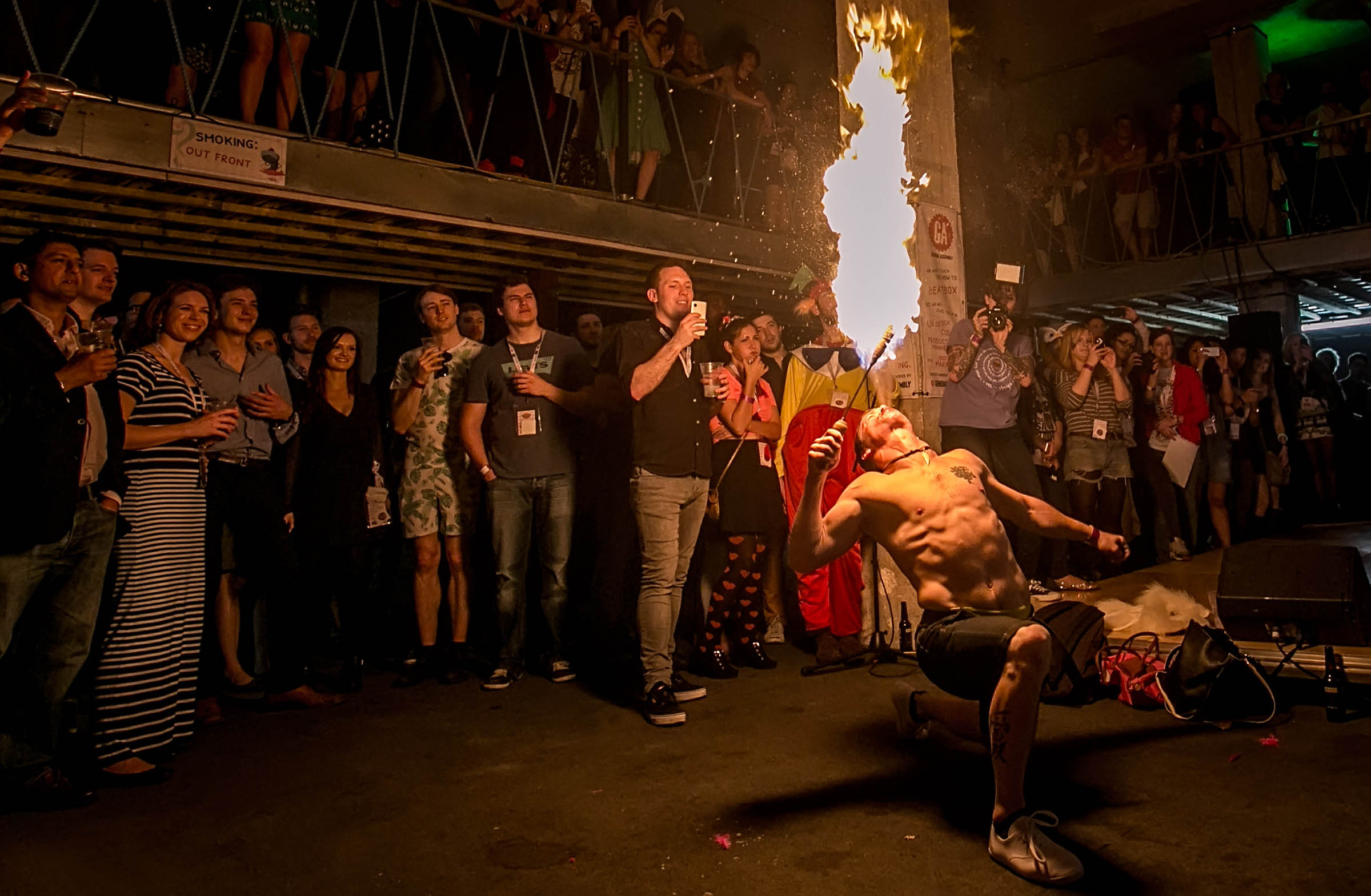 And another fire-breather, another angle. I really wanted to bring out contrast between the flame and the darker crowd, so I quickened the shutter speed. This also gave magnificent contrast on the torso in a manner reminiscent of an old oil painting.
Exif: 16mm; ISO 2500; f/3.2; 1/250

I hope that gives a bit of sense of the variety that’s involved in doing a complex event, and of the choices an event photographer makes, at great speed, in terms of settings and composition. We delivered over 500 strong, edited images from this event – next day. Yeah.