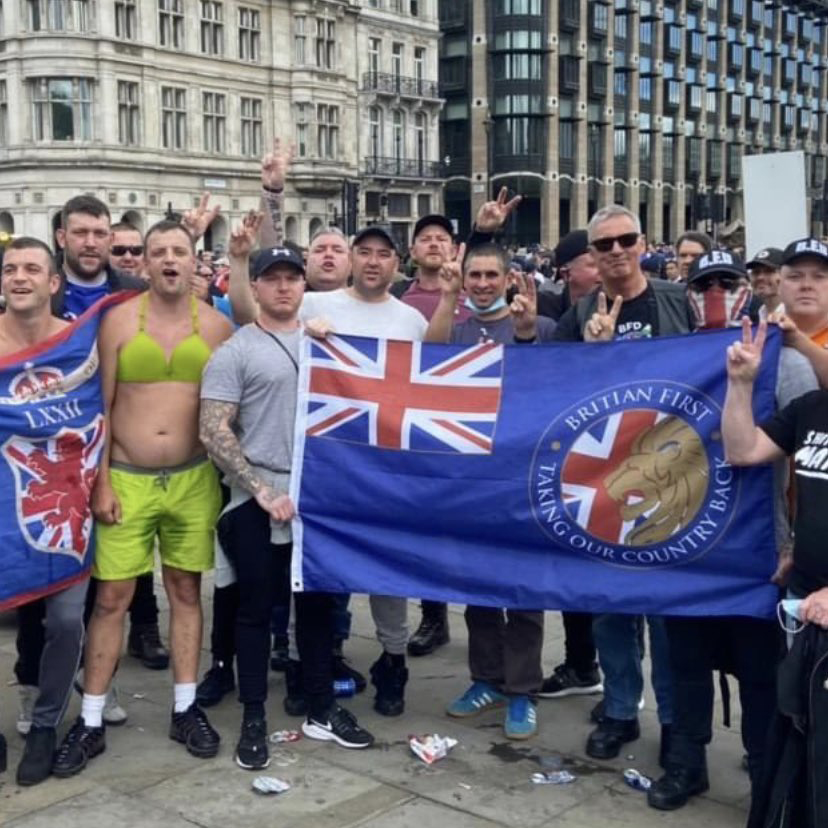 Beautiful, isn’t it? Everything you wanted to see confirmed about our patriotic football boys on the march. Illiterate, and incontinent! In one picture! Unbelievable.

And yes, it is unbelievable. Because it’s been manipulated to change the spelling of “Britain” on the flag. And if that’s been manipulated, then what chance the shorts aren’t as soggy as they might look? And hang on, that’s not what bras look like, surely?

How do I know? It’s not easy, really. When I first saw it, I thought the same as you probably did. What a gotcha! And if I were able to give you a foolproof recipe for spotting the bullshit in a few short sentences, believe me, I would.

The test has to begin with: does this photo look really unlikely – does it look “too good to be true?”.

Then think about who you saw it from. If it’s on the Reuters account, it’s not guaranteed to be true – nothing is ever guaranteed – but a lot of people whose jobs and reputations rely on accuracy will have checked to confirm its sources before you ever saw it. If it’s from an “Irish Folk Musician” with 1,000 followers and no history of breaking great news stories…

And what about the format? If it’s a straight attachment to a tweet or post, that’s one thing. But if, as in this case, it’s a screengrab of what purports to be some other posting, it’s worth asking yourself why that might be. Obviously if it’s an embed of, or a link to, a news story, you may be on safe ground.

But what’s a “news story” anyway? There are plenty of sites out there that look just like news sites. They were designed that way. But their content has little that could be recognised as credible, or sourced in line with any accepted journalistic practice.

(If you’re interested in other guides on how to look for things like embedded location data, or other metadata, or the way in which image compression artefacts can reveal areas that have been moved around, there are plenty out there. On that last point, software is on the way that should at least help, but my point remains: you’ve got to want to put that sort of work in to start with.)

So to be clear: I’m not saying there’s an easy diagnosis – it’s more of a process. Think of it as adding credibility weight (or not) as you go through these steps. If nothing by way of source or format is adding to that weight, you should really be asking yourself hard questions about your role in amplifying it. Because if you are a respected and generally sensible person, you are adding your own weight, in the eyes of others.

What’s good practice, then? Well, there are reasons why respected photojournalists risk their lives and their equipment going to things like this. They are bound by incredibly demanding standards relating to manipulation and accuracy. One dodgy photoshop like that, and their careers are effectively over.

There are also reasons why they are subject to attack – because of the fear of the truth. So if you can’t trace your picture back to a respected journalist or an outlet, then be really careful.

A few people commented on the similarity between this manipulation and one that did the rounds about 7 years ago – the same misspelling of “Britain”.

In one minute, I reversed that misspelling (and also ‘improved’ the skin tone matching, as the original fakery wasn’t even particularly well executed). And marked it with a banner describing the manipulation – one extra doctored picture out there isn’t automatically going to be a good thing. 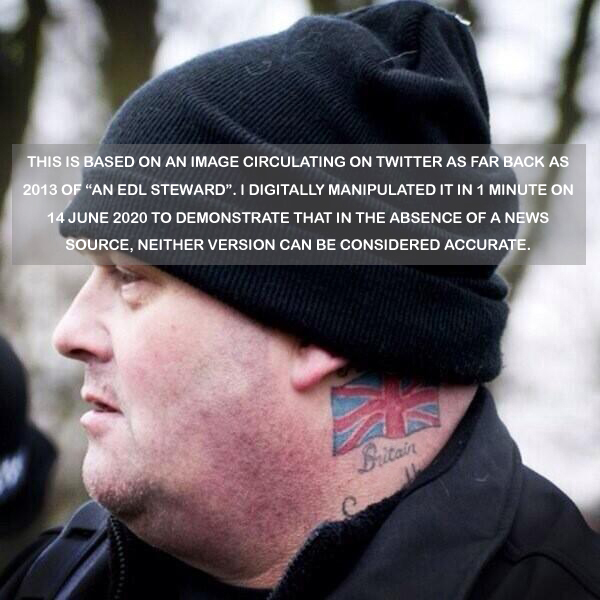 That raises a whole series of questions about how much calculation actually went into this fake picture.

Using a typo that’s been known to fool people before. Making a call-back to “pissing in public” – we’ve all seen the other picture of what happened next to Keith Palmer’s memorial. We know they drank a shed load of booze and there were no loos available. It’s playing on a theme we’ve been primed to find credible.

And when the original (or is it? who knows? – I haven’t found a reliable source yet, though will update if I do) photo surfaced, we see other things: cropping out a black man, and a woman, neither of whom would fit the “idiot white men” story quite as well. Though in another version of the photoshopped picture we see that whoever did the cropping also lost a purple-dildo-waving chap on the right. You win some, you lose some, I guess. I always said photography was about trade-offs. 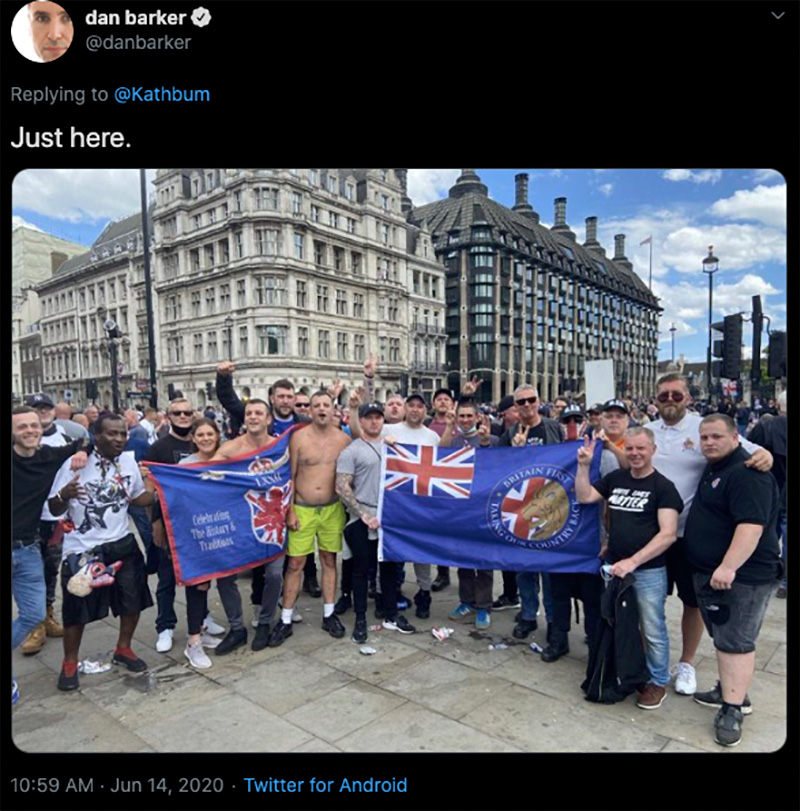 That, as the conspiracists would say, “makes you think, hey?”.

But please do. Please do think. It doesn’t matter whose side they are on, manipulation of the truth hurts us all.

*For very obvious reasons I am extremely cautious about using photos that aren’t mine on this site. However, I am doing so here by way of comment and review on their contents.