Under my nose this morning landed a competition promotion from British Airways that at first glanced looked to be worth a bit of my attention. Send in a travel pic, win some travel. Okay… well, I have some nice travel pics. And I like a good travel.

[NB: 16 March update now added at the foot of this post]

So what’s the first thing we do, kids, before progressing any further?

We look at the Terms and Conditions, don’t we?

And you won’t believe what I found…

Well, the first slightly troubling question arises even before the Ts & Cs – on the home page: once you’ve gone on your “fabulous break”, “you’ll get to spend time with a professional photographer who will give you tips on how to take the best possible pictures – and you’ll get to shoot photographs for British Airways next advertising campaign!”

Then in the Ts & Cs this professional photography assignment with as yet unstated commercial terms sorry, this fabulous photo break – has to be taken with some pretty fixed dates and locations. Yeah, ok, well still might be worth a look – might fit with my diary…

But where’s the most important bit? The “rights” bit? The one that matters a lot more than might meet the eye.

If you’re well-versed in creative rights and licensing, you can skip this next bit – for the rest of you, a 2 minute guide…

Copyright and licensing often get confused. In the UK, copyright comes into existence when an image is made, and belongs to the person taking it (or the organisation who employs them in their capacity as a photographer taking that picture). Cutting through lots of possible edge cases, that means if you’re entering one of your pictures in a competition like this, you’re almost certainly the owner of the copyright through having clicked the shutter button. Owning the copyright puts you in control of how that image gets used, and how much has to be paid by others (if anything) to use it. You decide on terms for use through the other part of the equation – licensing. You can grant a license however you like – specifying who, where, how much, how long and a bunch of other variables about the image.

Now, competition terms must always say something about licensing. At a minimum you need to grant them permission just to display the image on their site, saying how wonderful you are. (This is why you see similar stuff in social media site terms – Zuck wouldn’t have got so far if on Day 2 of Facebook he got sued by a bunch of people claiming he’d displayed their uploaded images without the proper authority.) In the real world, you’re also going to expect competition organisers to want their pound of flesh for running the competition – say to be able to use the image commercially to a greater or lesser extent. This might mean in a poster campaign, or printed on mugs, or on their website. They might not know exactly how they’re going to use it, so it’s common to see quite wide licensing being requested.

OK, back in the BA room. What they’ve done here is unforgivable.

Not only are they insisting on licence terms that are as wide as they could possibly have dreamed up in an opium-induced seminar on wideness chaired by Arthur Daley but they’re also asking for assignment of copyright.

Yes, that’s right. Just to be able to enter, you have to hand over the keys, permanently, to BA. If this hasn’t got your eyebrows welded to the ceiling yet, it should have. Whether you win or not, by putting in your cherished picture you have handed over any future commercial interest in it to British Airways. For ever. (Well, for the decades-long lifespan of the copyright, which amounts to the same thing.)

This isn’t just excessive-licence-frenzy. This is theft.

Without getting into detailed numbers, a sought-after, high-quality commercial image licence easily runs into hundreds or thousands of pounds, depending on circumstance. You read that right. And that’s just for licensing. Irrevocably transferring the copyright should (and does) fetch even more.

And British Airways are demanding this as the entry ticket for a competition that might get you a free flight and a so-far-unspecified “opportunity” to use the talent you’ve demonstrated to make even more photos for them.

As it stands, they are setting themselves up to get a massive image library of entries, over which they will claim all rights (for as long as those rights have any meaning) including the right to sell them on to anyone they choose for purposes that need have nothing to do with British Airways at all! You see why copyright is such a powerful beast? And perhaps why we photographers treat it with such seriousness?

It is so grossly disproportionate an entry price that it’s quite possibly illegal. We’ll see what the Advertising Standards Authority and other regulators have to say.

There are a few other wrinkles they’ve missed – what about model release requirements for images that have people clearly in them? Or property releases? Or trademarks contained within them? That, and the general incomprehensibility of the terms (like the bit where they suddenly reintroduce “non-exclusive rights” as a concept) make me think it’s just incompetence rather than actual, outright, malicious, grasping greed.

They’ve made an awful mess of this. This a major, global brand who really, really should have known better. They need to fix this with all haste, before they get into a lot of trouble, reputationally and possibly legally. 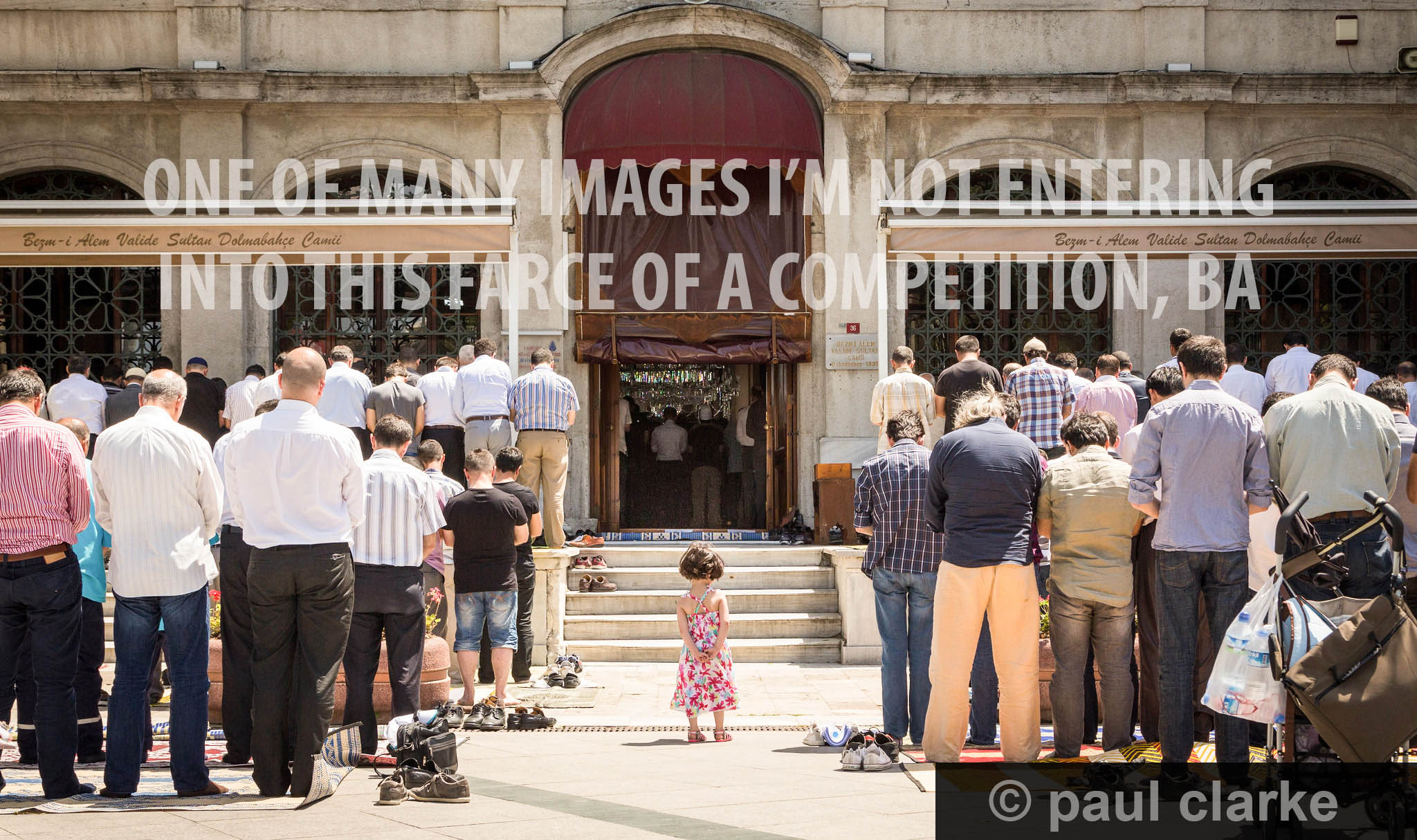 I’m very pleased to say that BA got in touch. Personally, by phone, and everything. And, pretty promptly, they’ve revised those terms for the competition. I’d had an inkling that the first, clumsy drafting didn’t really reflect their intentions. They hadn’t intended to grab copyright – of selected “winner” photos, and certainly not of those entered. They were brave enough to tweak the wording without restarting the entire competition, making the judgment call (the right one, in my view) that they could reasonably do that and apply it retrospectively to entries already received. Hard to see who would complain about that, anyway!

Have they got it as right as I would have liked? Go on, have another look. I think…perhaps not quite. I’ll give them an 8 out of 10. You’ll see that they now use the phrase: “You will retain the copyright in the photographs you submit to BA at the time of entering into this competition.” In my view, that’s only there because in someone’s head somewhere, the thought lingers that…y’know…maybe with some of the winners…depending on how we might need to…we might just want to…

You shouldn’t see this sort of fluffiness when it comes to fundamental rights. If the intention is that copyright will always remain with the photographer, then say that. Just like that. If it’s a possibility that this may not be the case in all circumstances, man up and say what those circumstances might be. “At the time of entering” indeed! But, well, it’s improved – a lot – anyway. They make the reasonable claim on usage rights that I’d expect, but if I were doing the drafting, I’d have made more effort to refer to ‘licensing’ rather than ‘rights’. When push comes to shove, they’ll probably behave as they should, but language is a good clue to underlying mindset. Anyway. 8/10. And kudos for listening and acting.

Oh, and what about that other bit about what the winner might have to do by way of commercial photography, and on what terms, on the “shoot our next campaign” bit of their prize trip? My contact put it pretty well in our chat, actually. No requirement to deliver a set amount of artwork, just the opportunity, if they create something lovely, to see it featured within a forthcoming campaign. Crucially, this will be accompanied by blurb along the lines of “see how Alison interpreted the Alhambra Palace” etc. etc. showing something of the story of “Inspire Us” and the provenance of the image. And I think that’s ok, on balance.

This initiative isn’t about “doing an advertising shoot on the cheap” – its spirit lies in opportunity, rather than exploitation, and it’s made a good U-turn to correct the misleading impression that it was after the world’s cheapest travel image stock library. Nice one, BA.

6 thoughts on “Up for grabs”