The Scandinavian leg is hard to describe. Hundreds and hundreds of lakes, thousands and thousands of miles, millions and millions of trees, and a few answers to the question: “what’s the difference between Norway and Sweden?”

Leaving Copenhagen, our route was across the bridge to Malmo, then a change of train in Gothenburg. On to Oslo, changing for the sleeper to Trondheim. Trondheim meant crossing a platform for all of 20 feet, before another half dozen hours to Fauske.

Fauske was vital in terms of timing. We had a twenty minute window to catch a bus to our most northerly point, Narvik. Four hours of bus, via a ferry, and little in the way of fallback should we miss it. We made it.

Through Narvik – where we had proper midnight sun – and right the way down through Sweden from top to bottom, it became very clear that this was a landmass of two halves. Norway: spectacular fjords, mountains, incredibly clean everything (and fast, free wifi pretty much everywhere). Sweden: grey skies, drizzle, flat, trees, more trees.

I know it’s unfair to judge a country by a passing weather system, but I also had a bit of a downer on this part of the tour because it didn’t give a lot to work with in terms of varied images. Maybe there was also a bit of brain rot as a result of covering such enormous distances, especially after spending whole days in the same seat.

The ferry across the fjord was incredible though. Time for a hotdog (best hotdog EVAH) and forty minutes of silent gliding between snowcapped mountains, many capped with slabs of marzipan mist. I hadn’t enjoyed a ferry so much in my life: a record which stood for only a couple of days, but that’s a story for the next post.

Anyway, a few of the more interesting photos from this section: 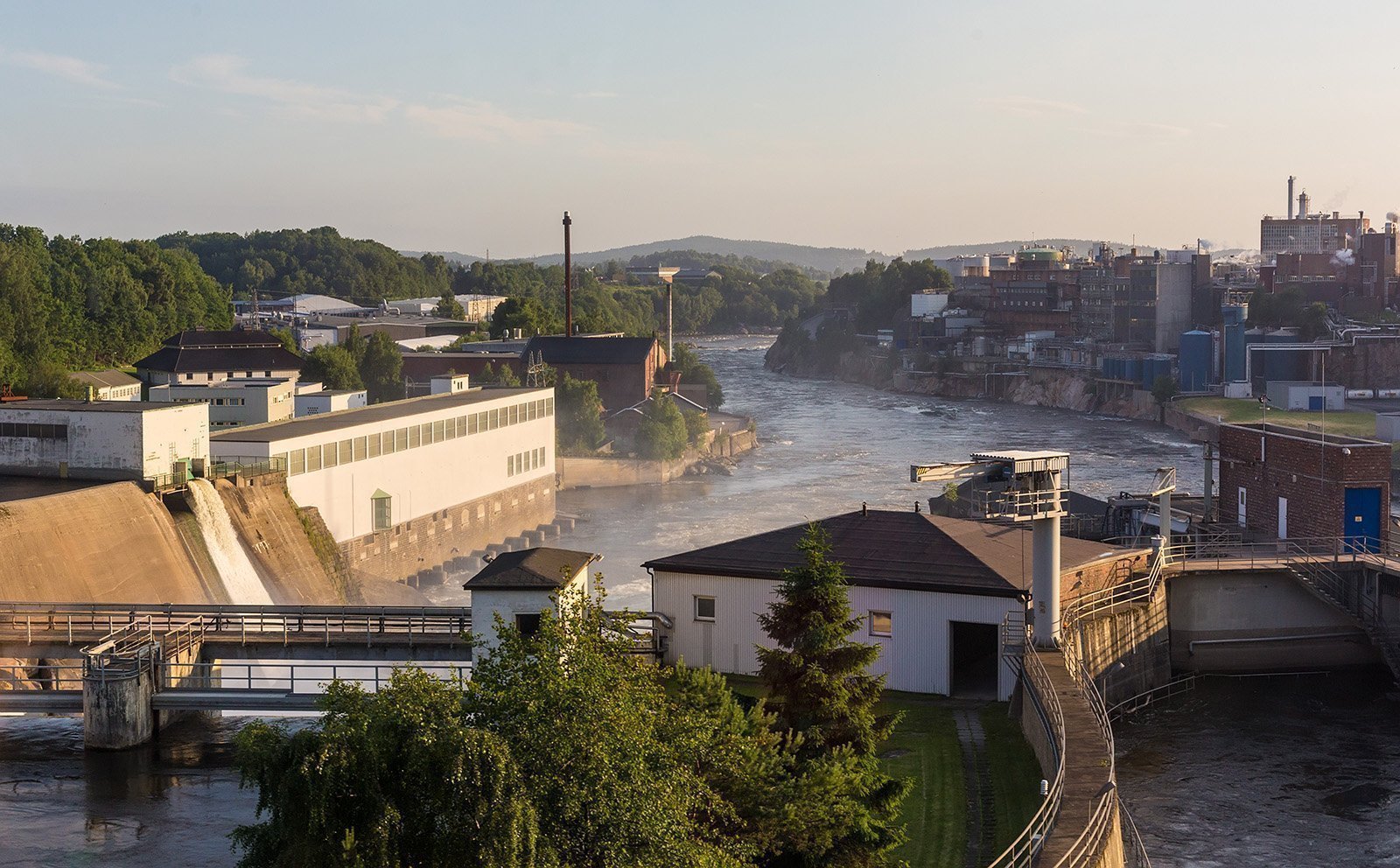 When you’ve had the same view for hours, the sudden appearance of Many Things becomes very stimulating. Industry, a dam and hydro system of some kind, rushing water. And factories. All a bit too exciting, really.
Exif*: 50mm; ISO 800; f/8; 1/400 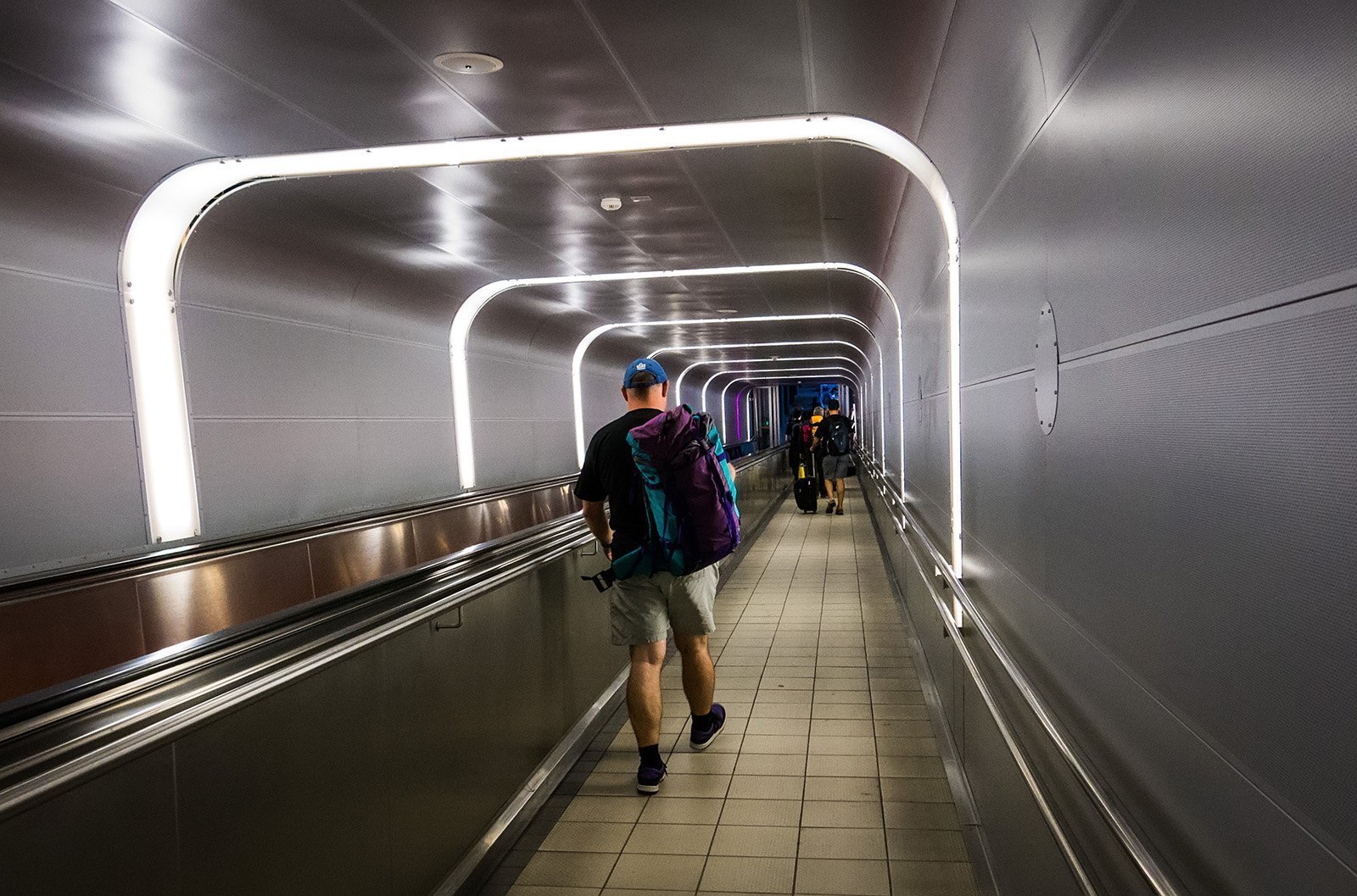 We did get off, very briefly. Here in Oslo, changing for our sleeper train, a rushed shot with some nice colour and perspective. Taken, as with a lot of the quick, opportunistic ones, with the G15 that’s generally hanging around my neck ready to go. For a compact, the time from switch-on to ready is amazingly fast.
Exif: 28mm; ISO 800; f/2.8; 1/200 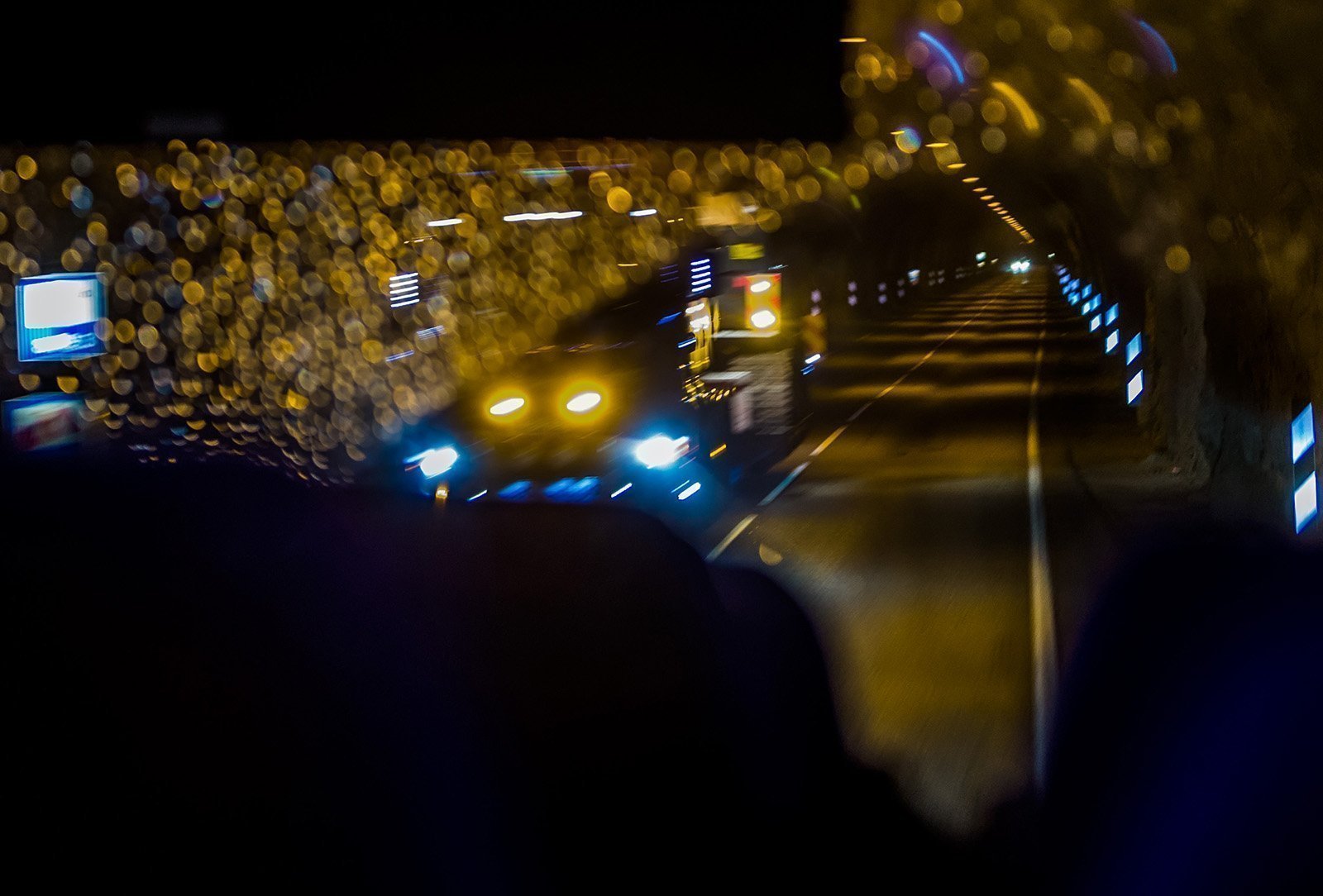 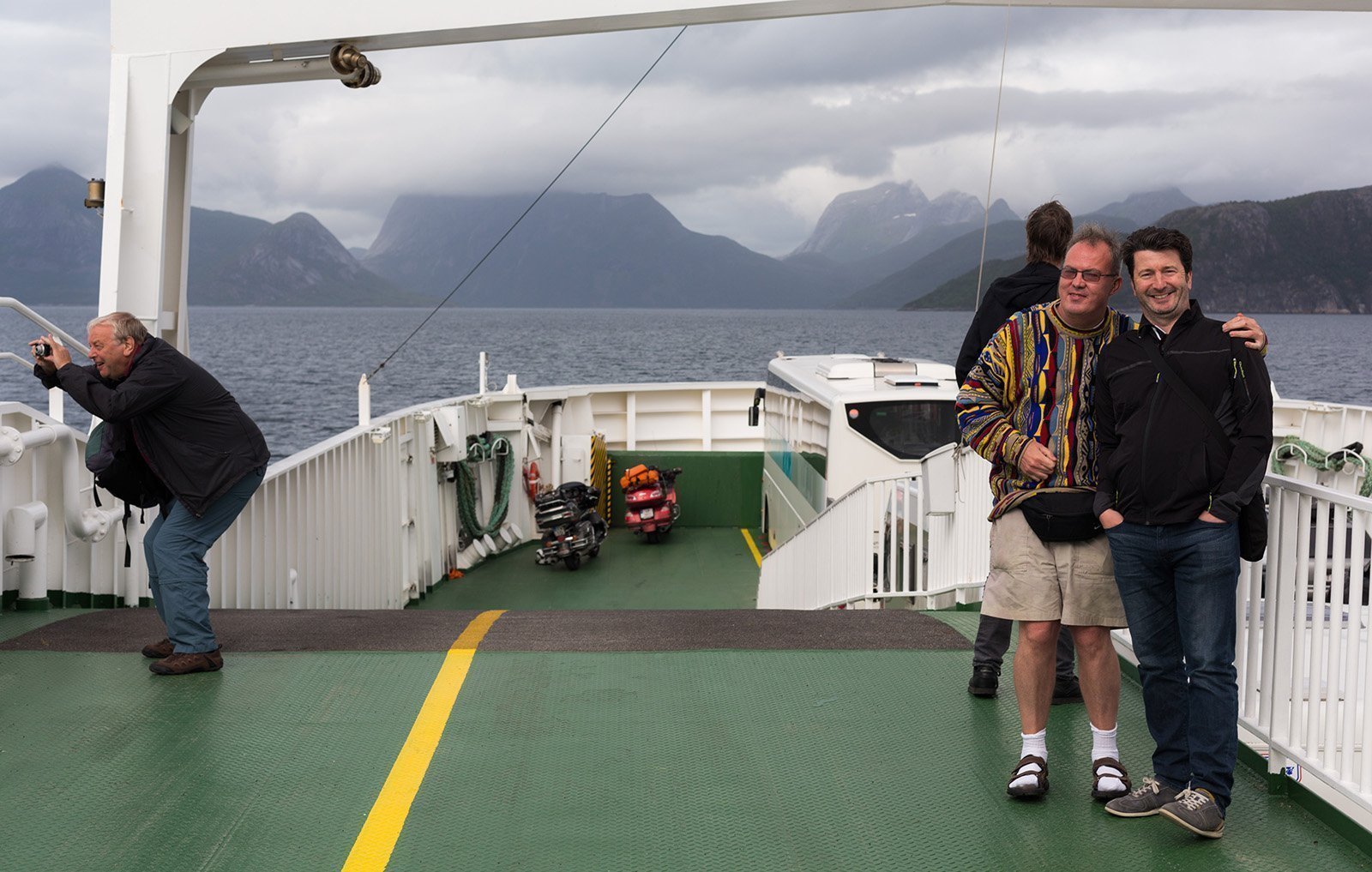 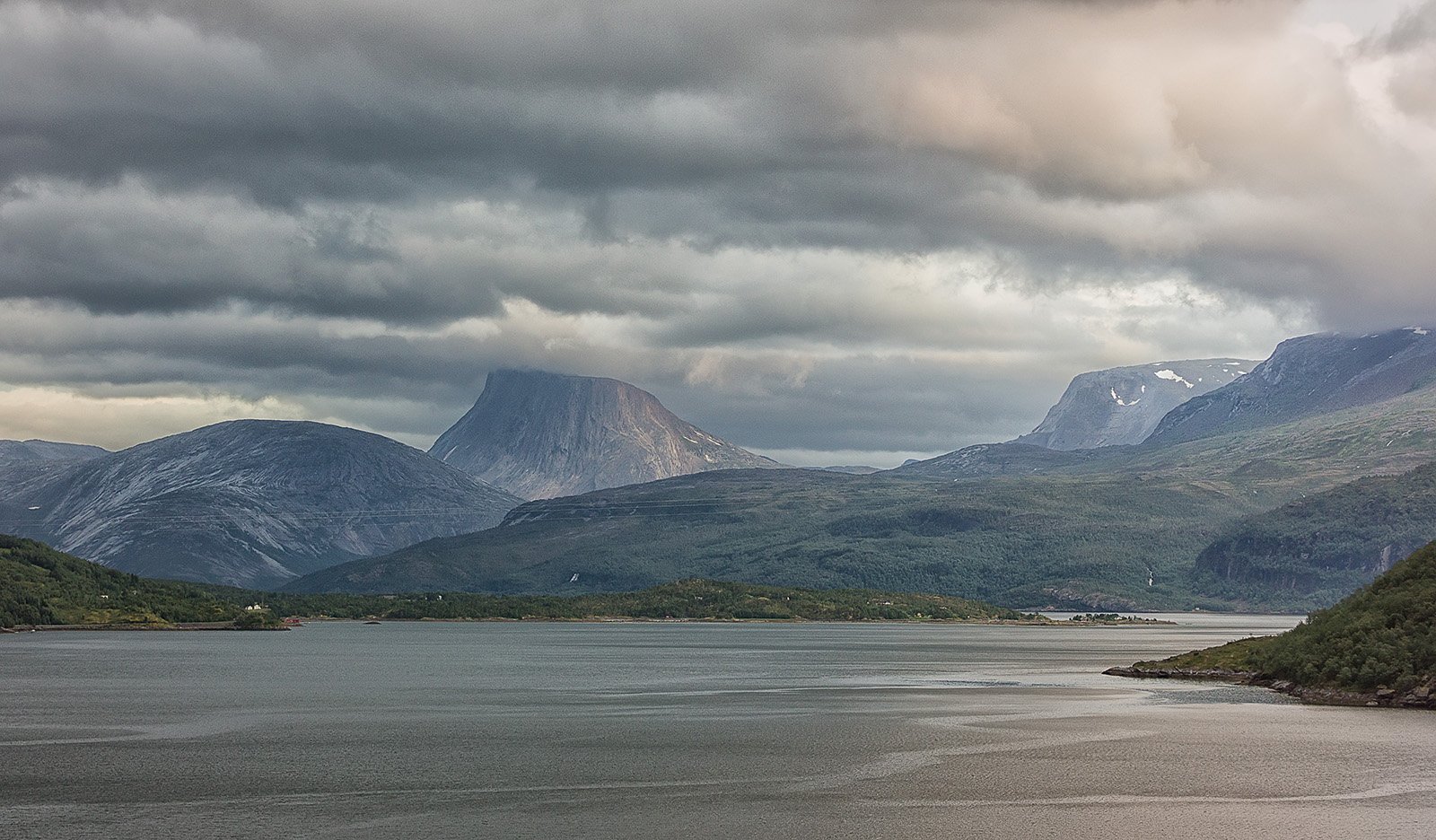 Through a thick coach window as we neared Narvik, this really was Norway at its best. Although it never got dark, there were flashes of pink from time to time, and the patch on the right of this frame was in lovely counterpoint to the bluff, Middle-earth geography on the left.
Exif: 70mm; ISO 320; f/3.5; 1/250 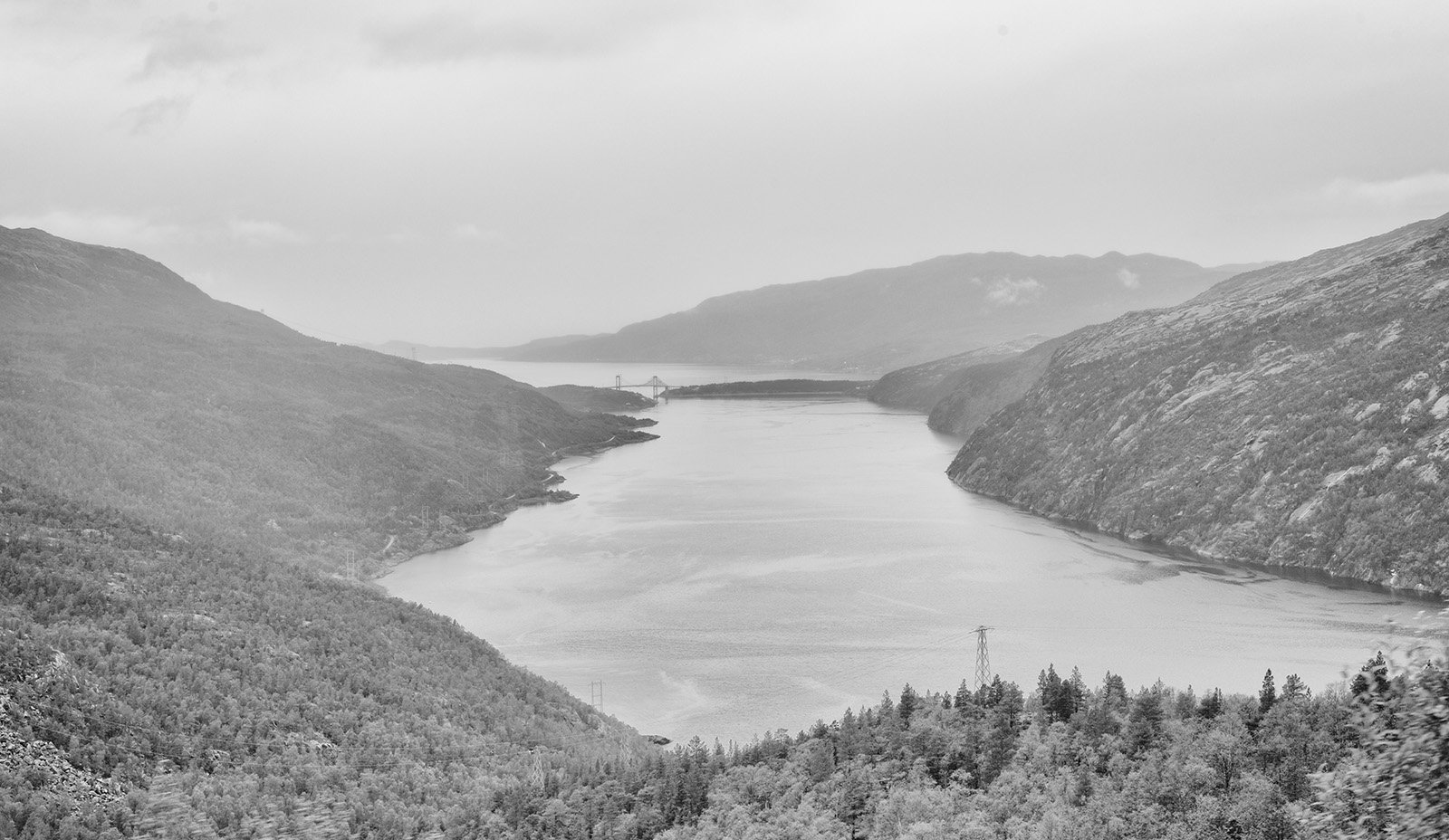 Having left Narvik, the train hugged a fjord edge, eventually offering the long shot back down toward the sea. Black and white processing here: stark in every way, this landscape.
Exif: 50mm; ISO 250; f/9; 1/250 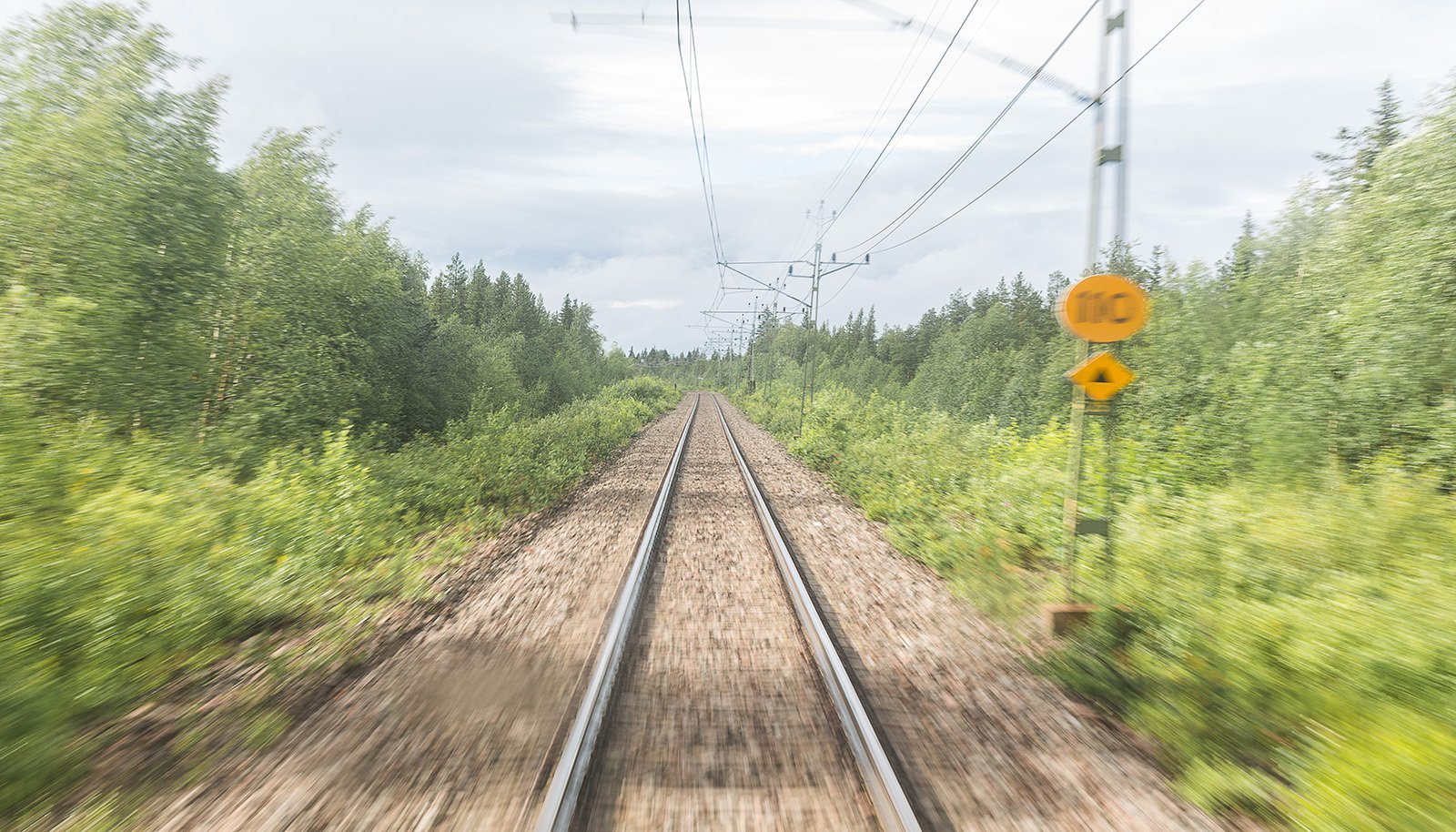 Given that left and right outlooks didn’t offer much but unbroken forest, I was delighted to find this view out of the very back of the train. Time to play with shutter speeds, catching the motion and the monotony. A straight piece of track, but viewed large, showing just the tiniest curve to the left in the distance. Oh the excitement!
Exif: 50mm; ISO 50; f/13; 1/20

Here’s the full photo collection from the tour as it develops, day by day.