A friend sent me this story to have a look at today: 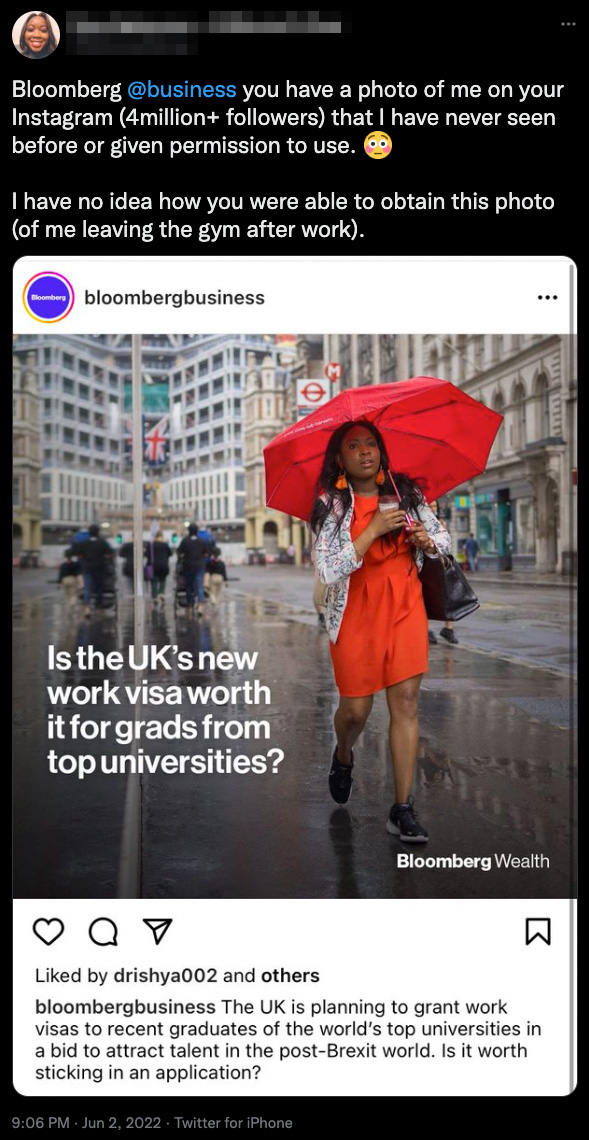 Bloomberg Business (or the agency that runs their social media on their behalf) have put together an Instagram post, and gone to find a photo. They’ve found one, very likely via Getty Images, presumably paid the requested fee, and posted it to their 4.3 million followers.

And as seen in the complaint above, the woman in the photo has seen it and asked them what they think they are doing.

*This is the Getty listing, making the photograph available for sale for editorial use: 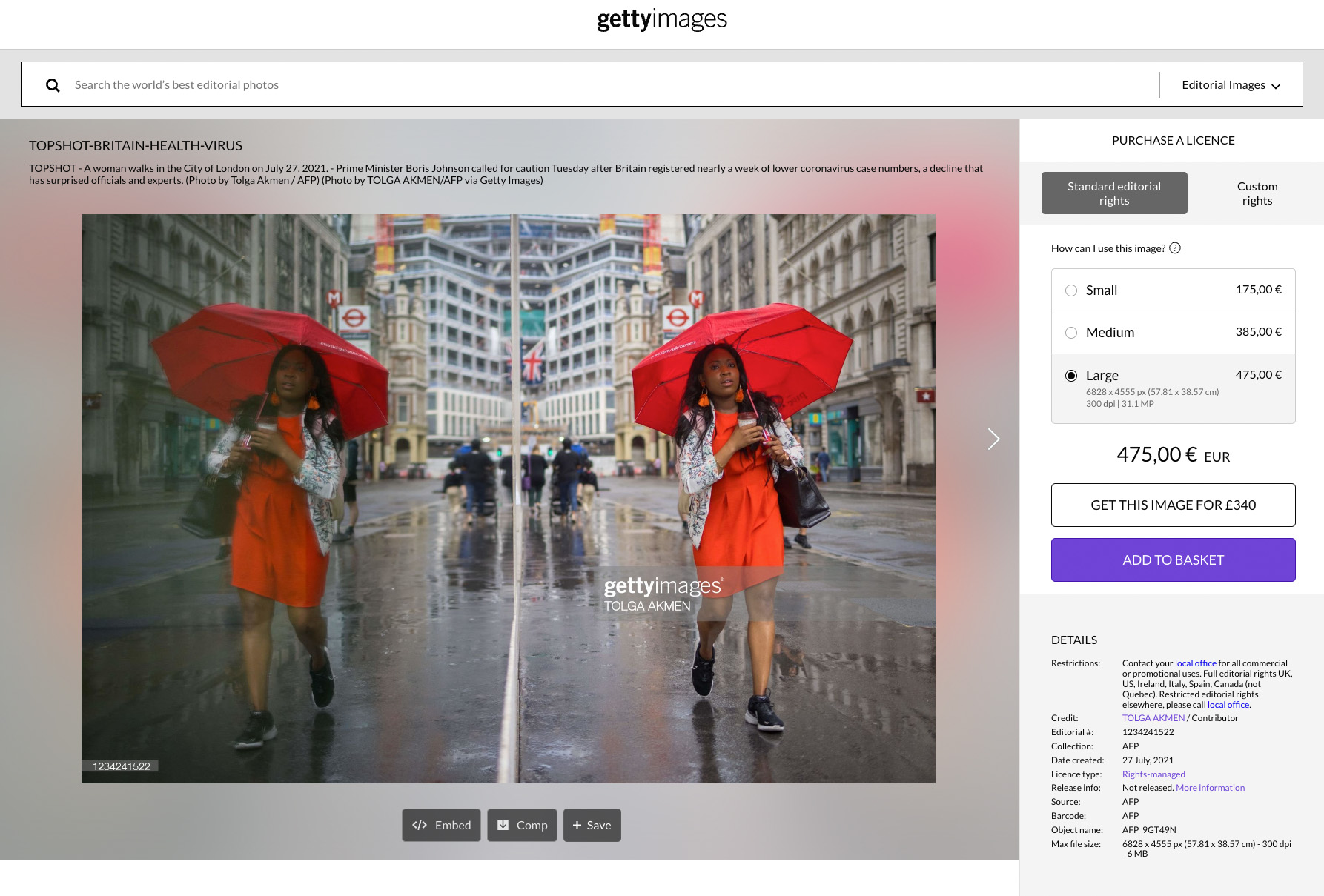 Let’s take a closer look at that bit about “How can I use this image?” 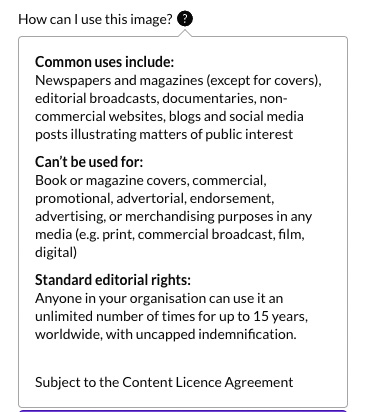 So what’s the legal position here?

Obviously, I’m not a lawyer. But as a full-time professional photographer I have to know a few basics. There is no inherent right to privacy from being photographed in the UK. Instead we rely on a patchwork of laws from harassment, to defamation, to data protection to sweep up as best they can around this gap. So if you’re in a private space, or at least in a place where you could reasonably expect to avoid being photographed, or the image is defamatory to you, or reveals/implies information about you that has special protections in law (so general view “street scenes” showing the entrances of sexual health clinics are quite rightly thin on the ground), there are protections. But if none of those feature, as in this case, then the criminal law has little to offer you by way of comfort.

Commercial use is quite another matter, and the civil law does indeed have things to say here. Surely people can’t just take any old photo of an identifiable person and make money out of it? No. Indeed. And this is why those terms of use exist. Because we try to draw a line between editorial and commercial photography. Editorial: news, general public interest, all that sort of thing. Commercial: adverts, merchandising, things obviously in pursuit of the business objectives of a particular company or brand. But what about those terms for this picture? Don’t they mention social media? Yes, but “…illustrating matters of public interest”. It’s my speculation that a) the social media team creating the post might have read that bit of the terms a bit too quickly, seeing “social media” and not really thinking about the “public interest” part, and b) that no special terms were agreed with Getty for the commercial use of this image.

Why b)? Because anyone in the pictures business with any ounce of sense will protect themselves from a backlash from someone in the picture by asking them to ‘release’ any rights they might claim over its use. That’s why we call those agreements “model releases”. And you can see from the start of this story that there’s no release in existence here.

And what about endorsement? Does the appearance of an identifiable person in a branded commercial setting imply that they endorse the product? Couldn’t that end up being…expensive? Fortunately there is some case precedent here. Less fortunately, if you’re not a major celebrity for whom endorsements have a regular and quantifiable value, then they’re not terribly useful.

OK, where does GDPR fit into all this? I am not a GDPR specialist yada yada, but I recognise that consent is only one of the several lawful ways in which images and other personal data can be processed. The most common other one is “legitimate interests”. Think of it as a balancing act between the rights of people to enjoy a life free from publicity, alongside the rights of, say, news-gathering organisations to show the world, including its people, around us. (Or as an example from my working world, the rights of event promoters to publicise their work, alongside the rights of people there not to be regarded as unwitting – and unpaid – brand ambassadors. We mitigate this sort of thing in ticket conditions and event signage – none of course being applicable in the case of a woman on a wet London street.)

You may not agree with the principle of this balancing at all, but if it’s too far in the wrong direction we don’t have news photos, and big gaps in our history; too far in the other, and we’re abusing a largely unwritten moral right to be left alone. They are in tension, and editorial judgement is all about this balancing act.

But it does mean that people make an income from the images of others, without their consent. That’s a consequence, if we really boil it down, to having history, in the way we’ve chosen to have it. (Other countries have made different choices, but I won’t explore those in this post).

These are all examples of where the same image has been used. Not to an enormous extent, but illustrative of the world of news and editorial photography at work perfectly normally:

Hang on, what about that second one? https://www.studyinternational.com/news/tier-4-visa-student-route-uk/ – take your own view on whether this is “public interest” enough. A useful illustration perhaps that drawing that commercial/editorial line is not always completely straightforward.

It’s one of many areas in photography that we probably don’t talk about enough: where rights and money and journalism and commerce and feelings all roil together in a sometimes unsatisfactory muddle.

Anyway, this one looks clearly to be a commercial use, unlikely to be in line with the terms of licensing, and hopefully rectified with a post take-down and some restitution for distress caused. I think it’s fairly obvious where things have gone wrong, and it is unlikely to be the fault of the photographer or the photo agency, who do this for a living, and do it properly.

There are all sorts of cock-ups here: from the editorial/commercial stumble by the creators of the Instagram post, to the choice of subject for a story about work visas, to the PWC branding on the umbrella, to the absolute trash fire of unchecked NFT grifters and spammers in the comments. I’ll be very surprised if some tough conversations don’t happen after this between Bloomberg and whoever runs that Instagram account.

In a weird way I’m also glad to see cases like this surface, painful as they can be. These are the concerns that keep me awake at night: doing things the ‘right’ way, but finding that real distress has still been caused.

We need examples like this (and I write as a people photographer in many contexts from working with paid models to members of the public, with and without consent) to remind us of where the edges are. That even if something is slipped between the clumsy rules that exist, it might still not be the right thing to do.

UPDATE 5 JUNE: both the Bloomberg Business Instagram post and the Getty images page featuring the photo have been taken down

2 thoughts on “What keeps me awake at night”