A very dear friend of mine, when he hears someone is feeling a bit down, invariably sends them a story to read: Jerome K. Jerome’s magnificent “Three Men in a Boat”. When it was my turn to receive it, I saw why.

Boats, words about boats, pictures about boats…they weave a special magic. So a day aboard the Nb Midnight Star, a 30-foot narrowboat owned by my pirate friend Glenn Lesanto, was going to be full of the stuff.

The first moment you set foot on it, things start to change… 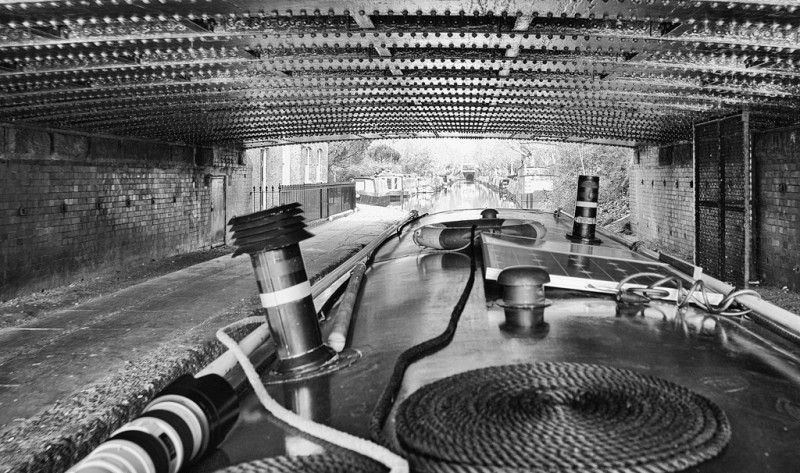 Surrounded by texture: smoky remnants of canal mist weaving out to a distant tunnel–set against hard metal as thousands of rivet-heads slip past above. B/w conversion with Silver Efex Pro 2.
Exif*: 24mm; ISO 320; f/7.1; 1/50

Time slows a little, then a lot. People you pass are smiling, invariably. Then you realise they’re smiling at you. And then they’re talking. To you. This is unheard of. Below London and–for a few hundred memorable yards–above (as the Grand Union Canal slips over the top of the North Circular) a separate world is going unhurriedly about its business. 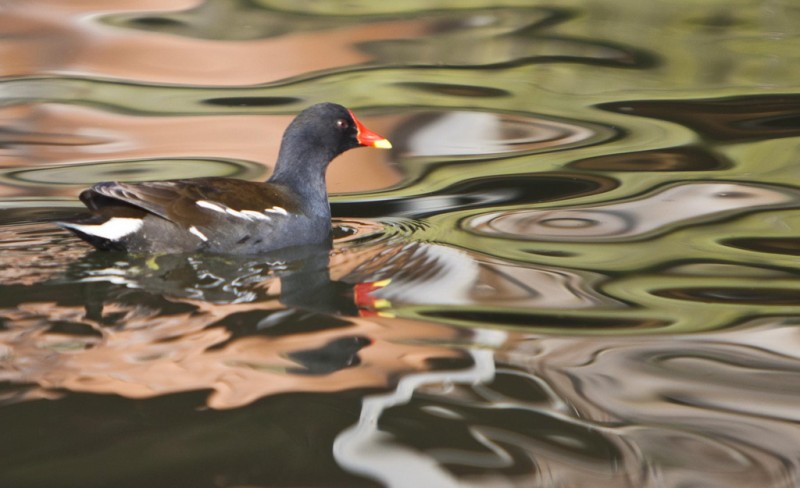 I wanted to set a context for the natural beauty of this bird somehow; it was moving fast with no great backdrop, and to be honest the water was pretty grubby. Answer? Use the coloured light from a boat behind to paint the water.
Exif: 400mm; ISO 400; f/5.6; 1/320

Glenn has plans for this boat. Big plans. I heard a lot more about them as we chugged east on his “commute” into town. That’s a four and a bit hour commute, by the way. Not a moment of that wasted, if I’m honest.

But first we talked about the coconuts. Bobbing around in the canal every few hundred yards. Big coconuts. Sometimes floating near neatly wrapped food parcels and religious posters. They’re devotional offerings, apparently. And at Alperton, I spotted one being left, right in front of me. Wasn’t so sure about the bags they were wrapped in. Hopefully not plastic. 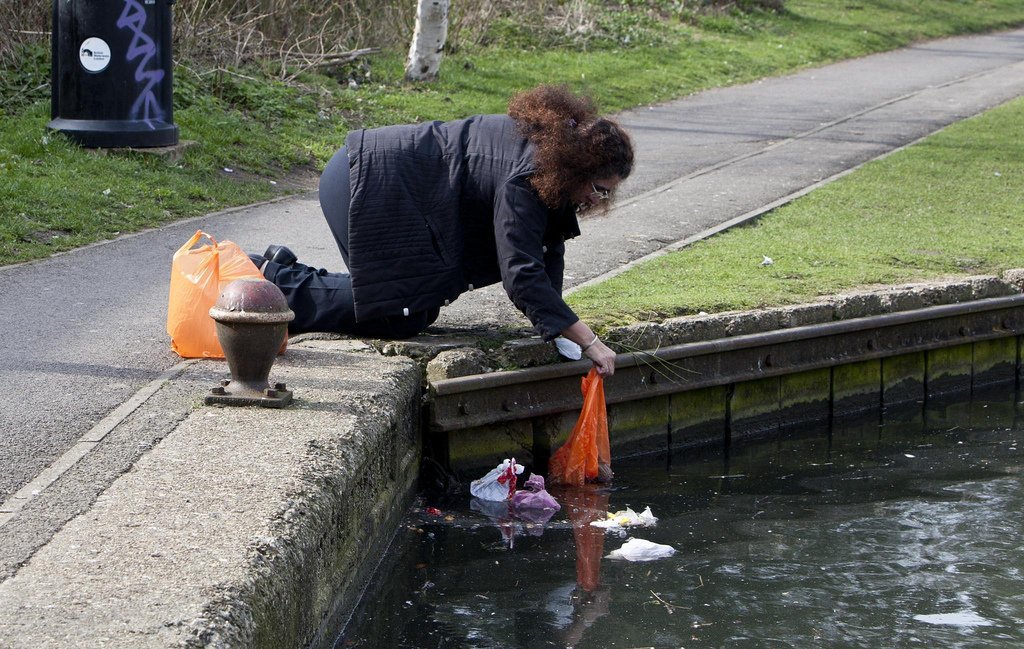 The boat makes such a good setting for, well, anything–but especially observation, learning and focus–that Glenn’s put together some Learning Voyages. They sell out quickly. I’m thinking about some deep, photo-based sessions. Interested?

Because stuff just happens. Images appear. Stories take shape. You just have to wait, and spot them. Like these guys, furtively heading towards some broken-into containers carrying bedrolls: 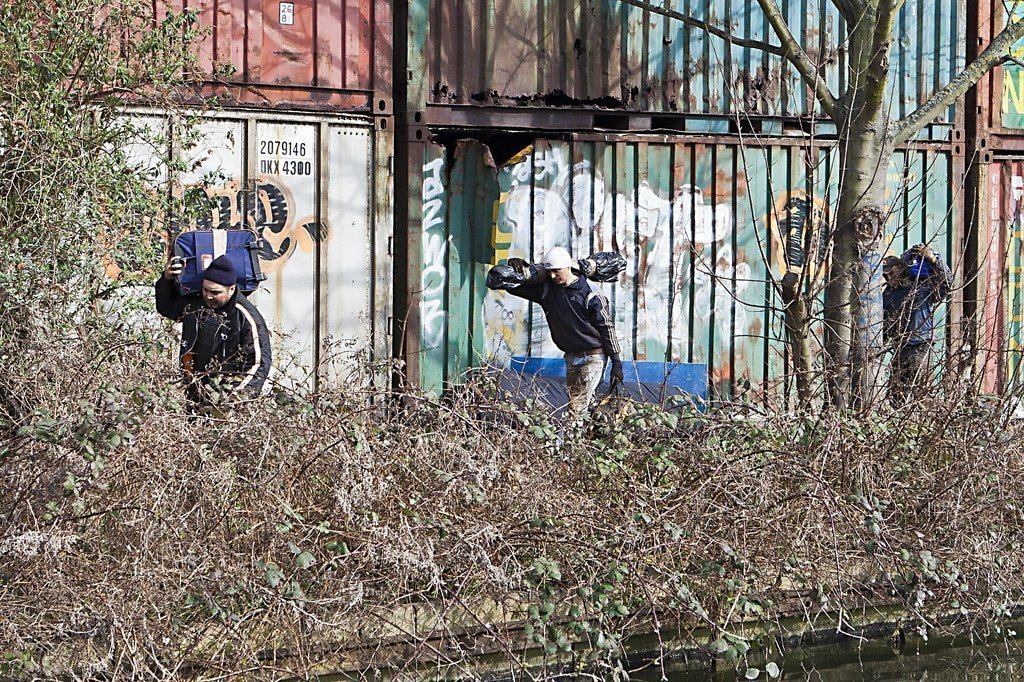 And on we went…Bend upon winding bend, through country parkland and light industrial squalour. Wildfowl exploding from the canal edge and flapping alongside you for a hundred yards. Swans, coots…a magnificent cormorant.

And the boats: from the pristine to the “seen better days”: 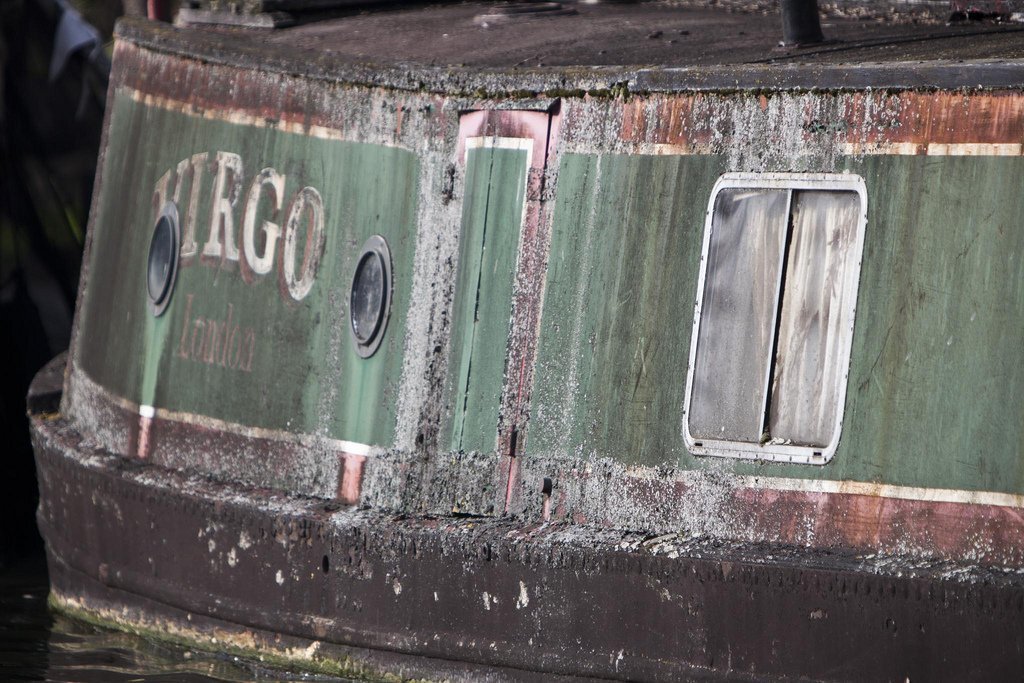 That exploded the myth that these boats get their weatherproof paint redone every year. Irresistible patina though, and a mildly ironic name.
Exif: 400mm; ISO 320; f/5.6; 1/1000

As it became inescapable that we were now in town, and there would be no more of this country-park stuff, the way ahead was rich in striking urban imagery: 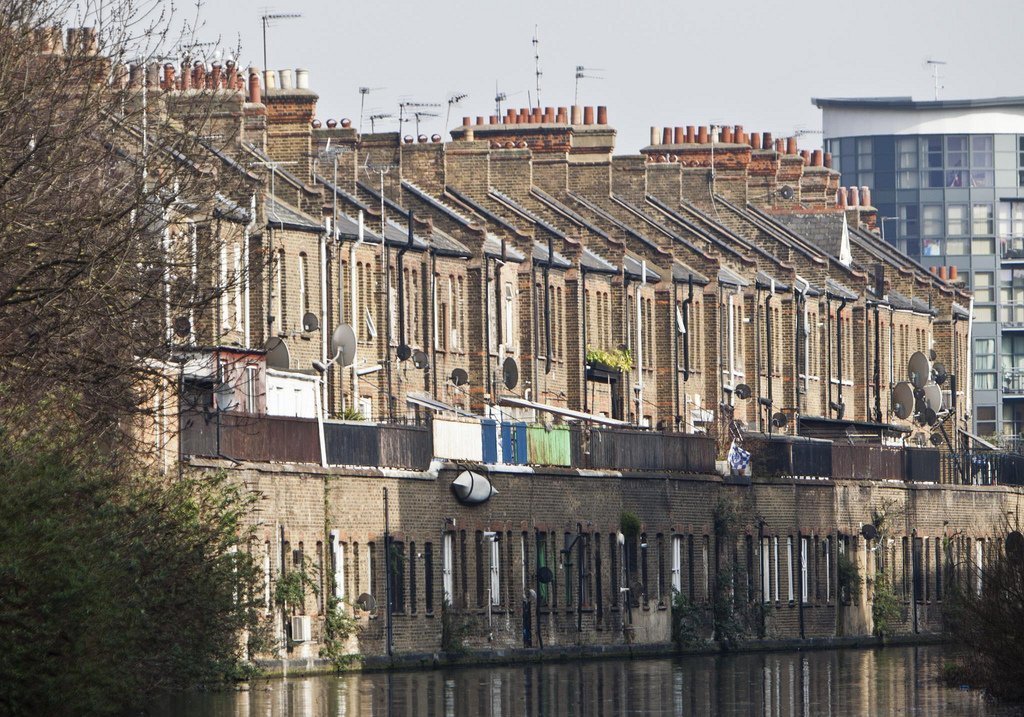 At super-telephoto focal lengths, you get this wonderful “compression” effect: here, very effective in giving character to a rare sight–houses built to the canal waterside, Venetian-style.
Exif: 300mm; ISO 320; f/5.6; 1/800 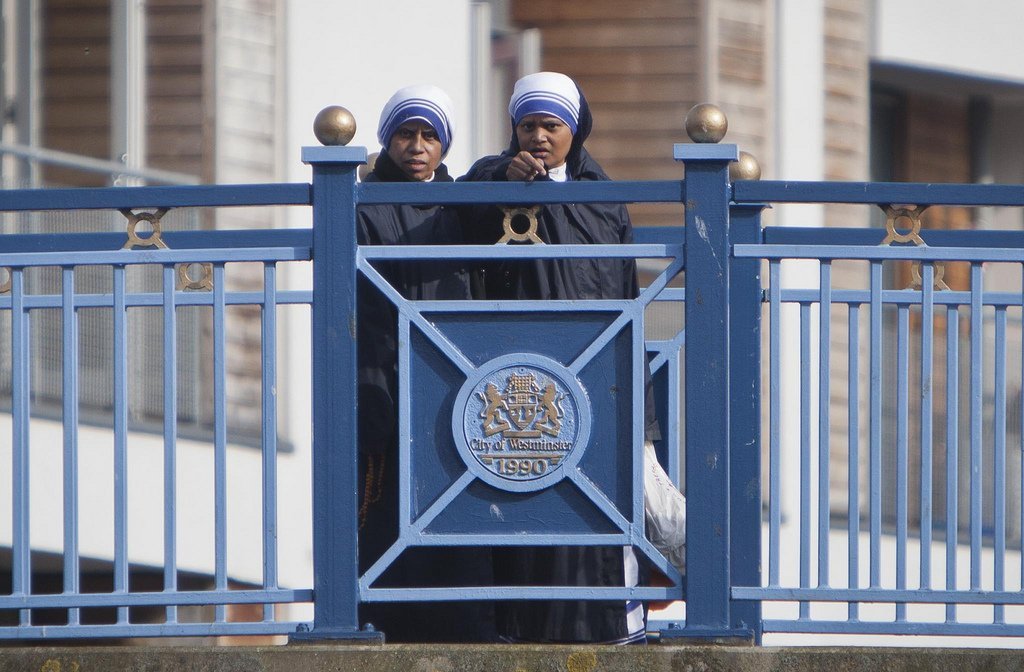 Journey’s end, Paddington Basin. Except it wasn’t. I was hooked. Couldn’t get enough. Wanted another quick blast. In this case, “quick blast” means a leisurely 45 minute swing through a tunnel and a park (Regent’s) to cruise in style into the heart of Camden. 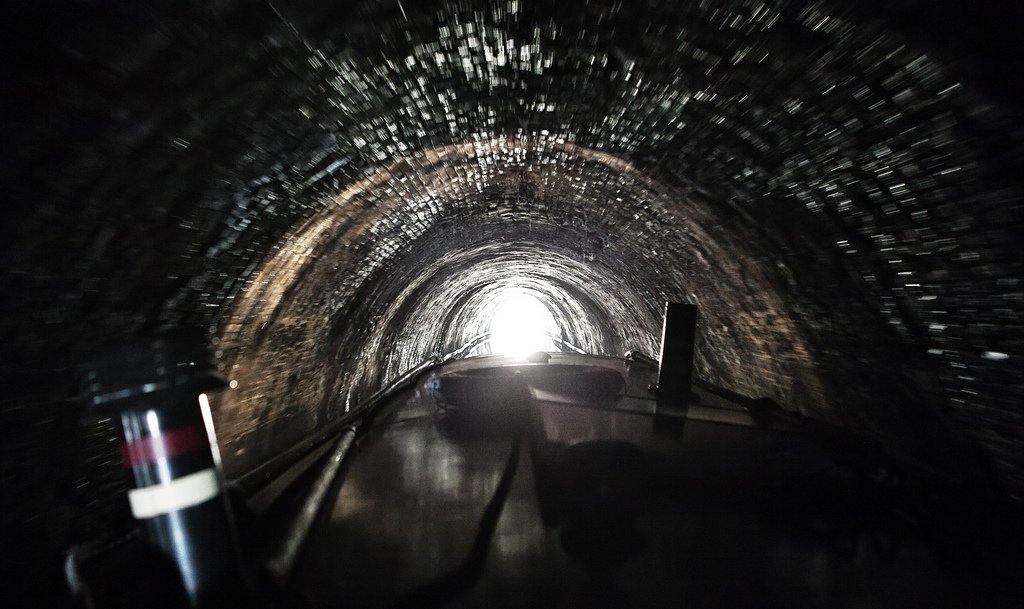 All change on the camera settings: for the first time that day, getting some “dark and gloomy” numbers on there, and a surprisingly quick traverse of an 800 yard tunnel while trying to get that definitive “light at the end of…” shot.
Exif: 28mm; ISO 1000; f/2.8; 1/10

And to finish, Camden doing what Camden does in the sunshine: a langour that could have been Sunday in August gracing a brisk Wednesday in March. 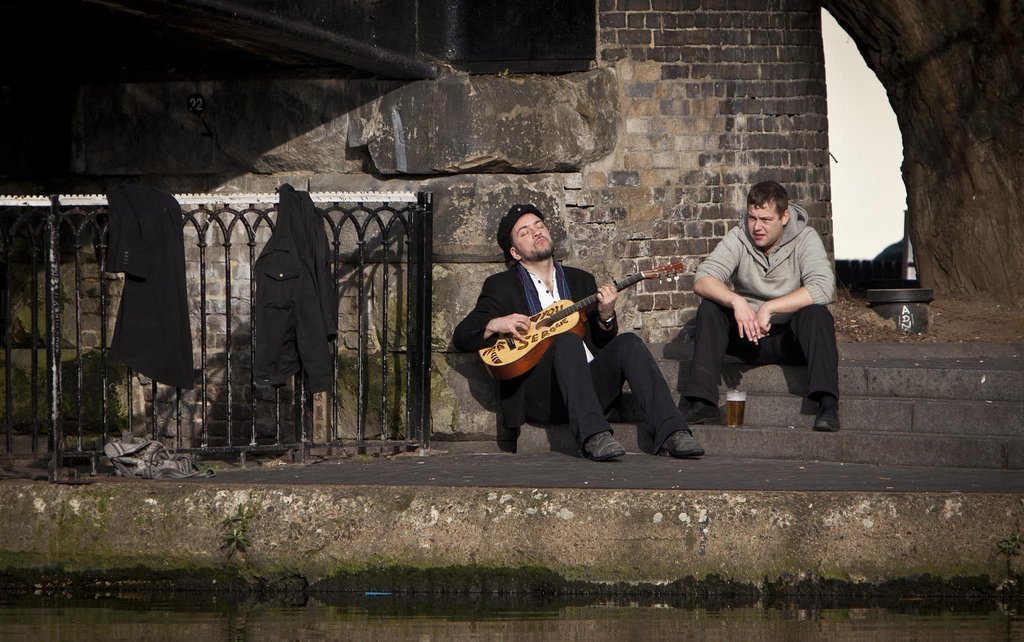 Go on one of Glenn’s Learning Voyages. You will if you do. I am certain of it.

Full set of photos from the day here.

One thought on “On the Midnight Star”