Lots of my work involves capturing people, organisations or events associated with technology. Sometimes it’s to feature the founders of a shiny startup, and quite a few times it’s been the subject of this post: a hack event.

What is a hack event? Lots of users, developers, designers, industry experts, data geeks and others getting together to make something new in response to a set of needs. Usually taking place in a short, focused period of time, always intense, and often leading to the creation of actual stuff – software or hardware.

So what’s there to capture visually? More than you might think. Here’s a selection from the recent NHS Hack Weekend in Cardiff – picking out a few of my favourites, and saying something about why and how I made them.

It’s also a pretty good guide to how I cover an event.

The beginning of a hack event is about introductions. Visually, it’s a chance to establish a view of where things are happening, and to pick out a few characters. Here, the event organiser, Anne Marie Cunningham, opens proceedings. As an overall introductory view, it’s shot at a very wide angle. Already we can see that this is a pretty special building, and I’ve done a little bit of meddling with the geometry in post-production to manage some of the distortion that’s inevitable when shooting with such a wide lens. 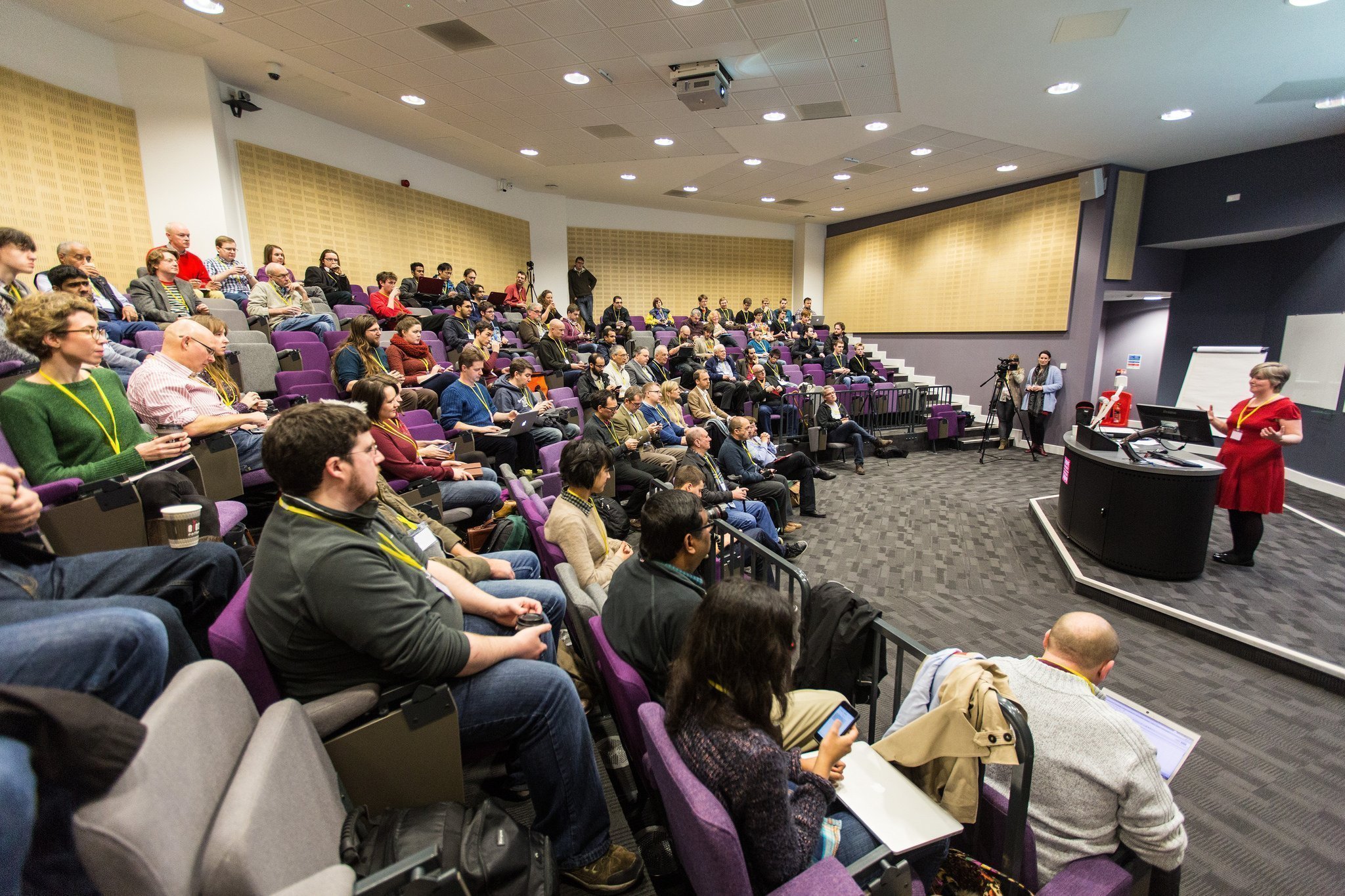 Teams form, each working on an idea with others who are able to contribute. The body language at this stage is always fascinating. A long lens from a distant balcony helps to minimise any sense of intrusion. 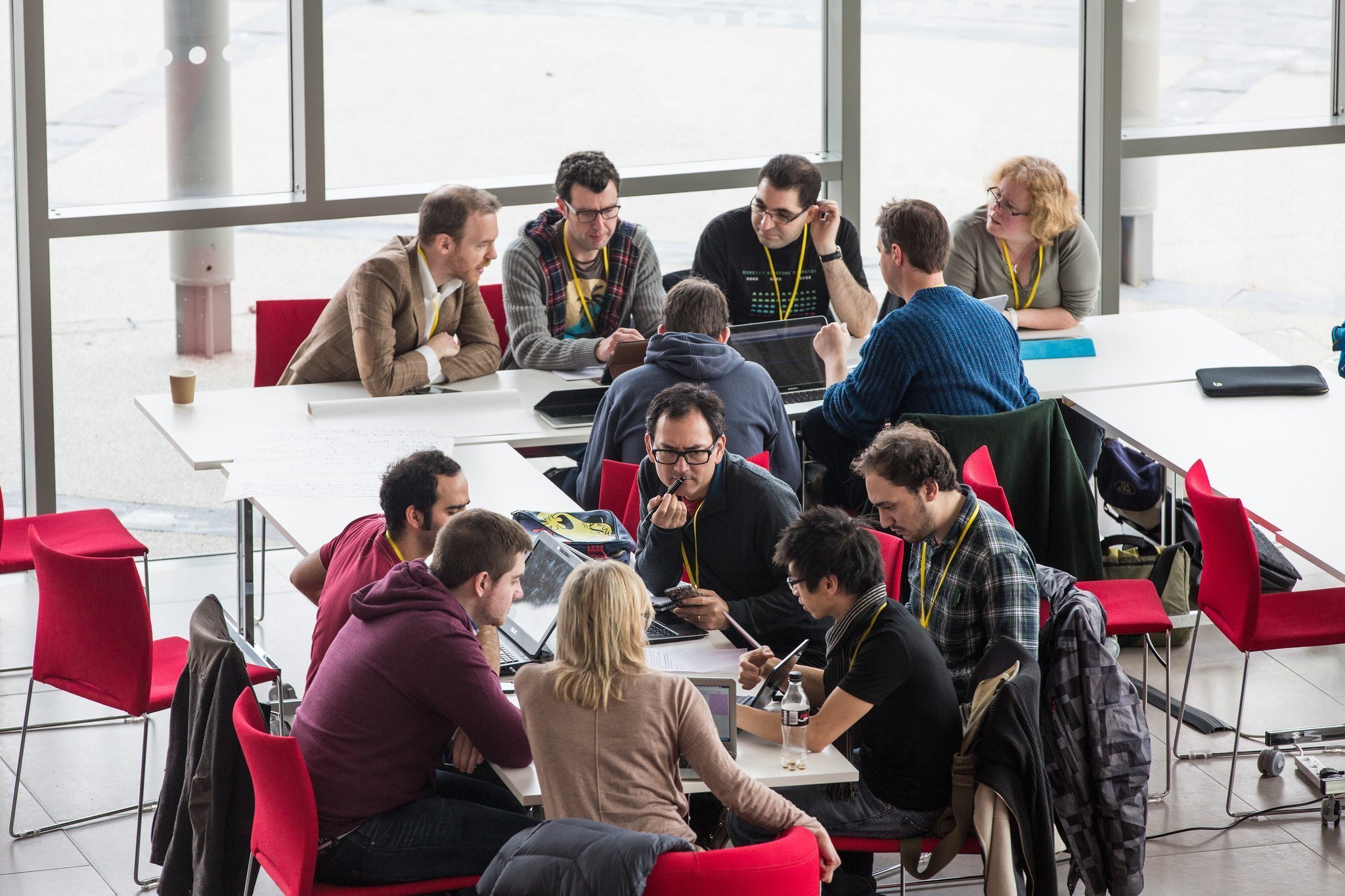 Good vantage points make a huge difference to event photography. Being able to be tucked out of the way, watching, and composing, is a real luxury. Event photography is so dependent on composition; without time to plan, light or pose, you have to “find it and snap it”. Again, and again, and again. This post isn’t about composition theory, but you might want to find a good book on Gestalt theories of composition, and prepare to have your mind stretched. This post gives you a taste. 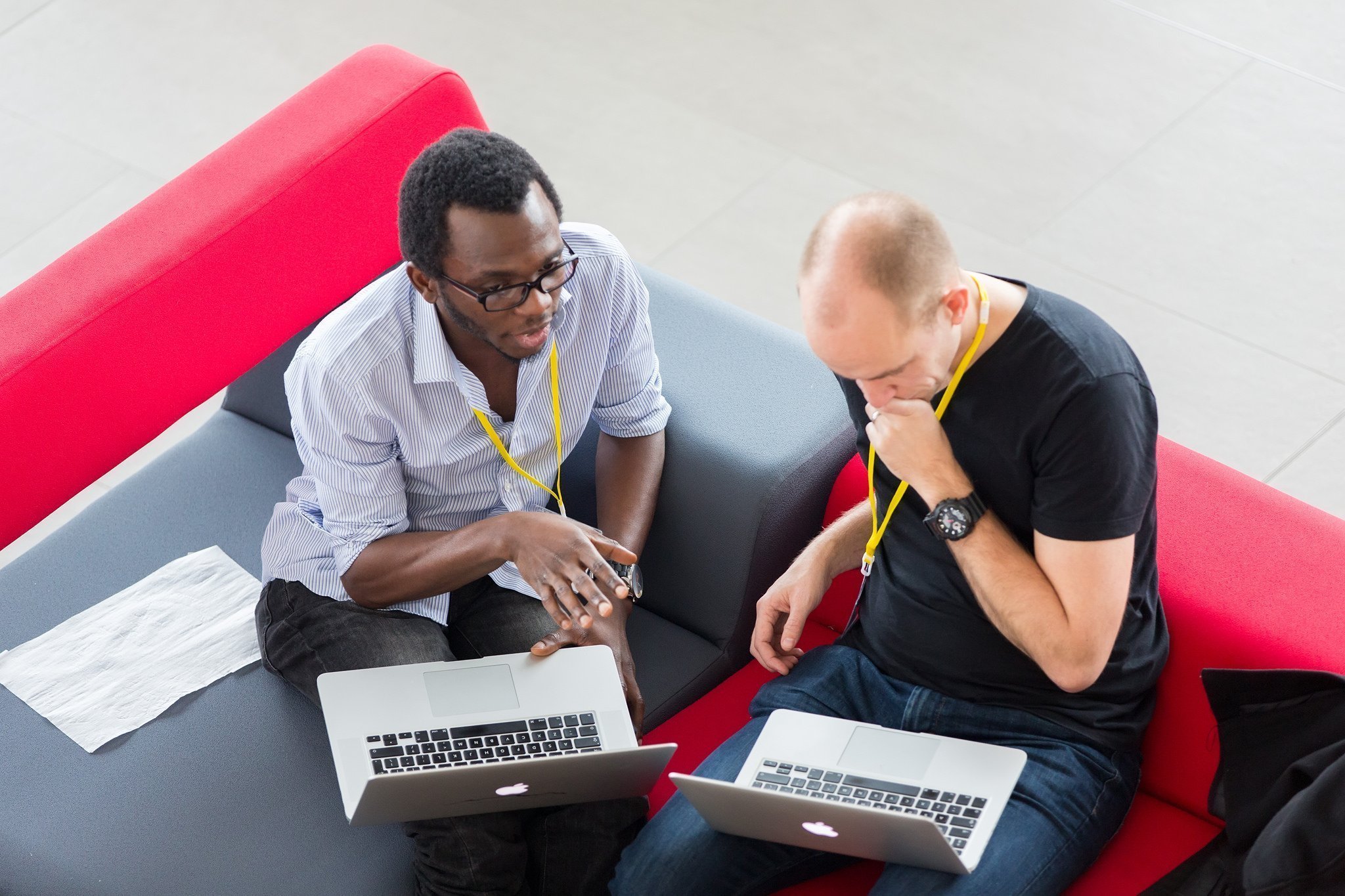 Constant people-watching. A sudden movement creates a captivating image with absolutely no notice. This one lasted for about two seconds. Plenty time enough. 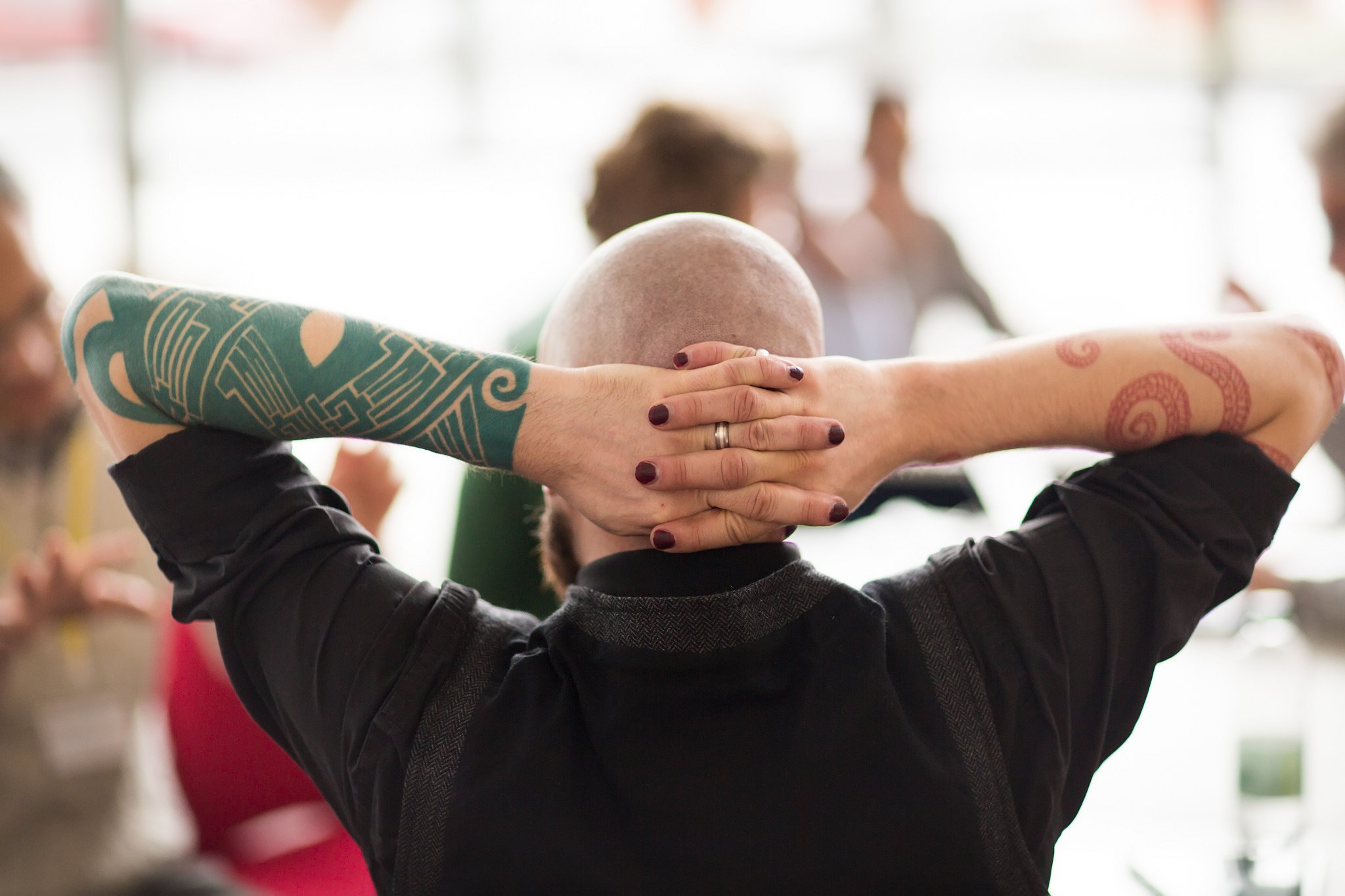 And taking some air outside the building, looking back in through the glass – this. Spontaneous, showing the main message of the event, and relatively non-identifiable – making the image useful as something more than the portrait of an individual – a consideration I’ll be writing more about in the next post. 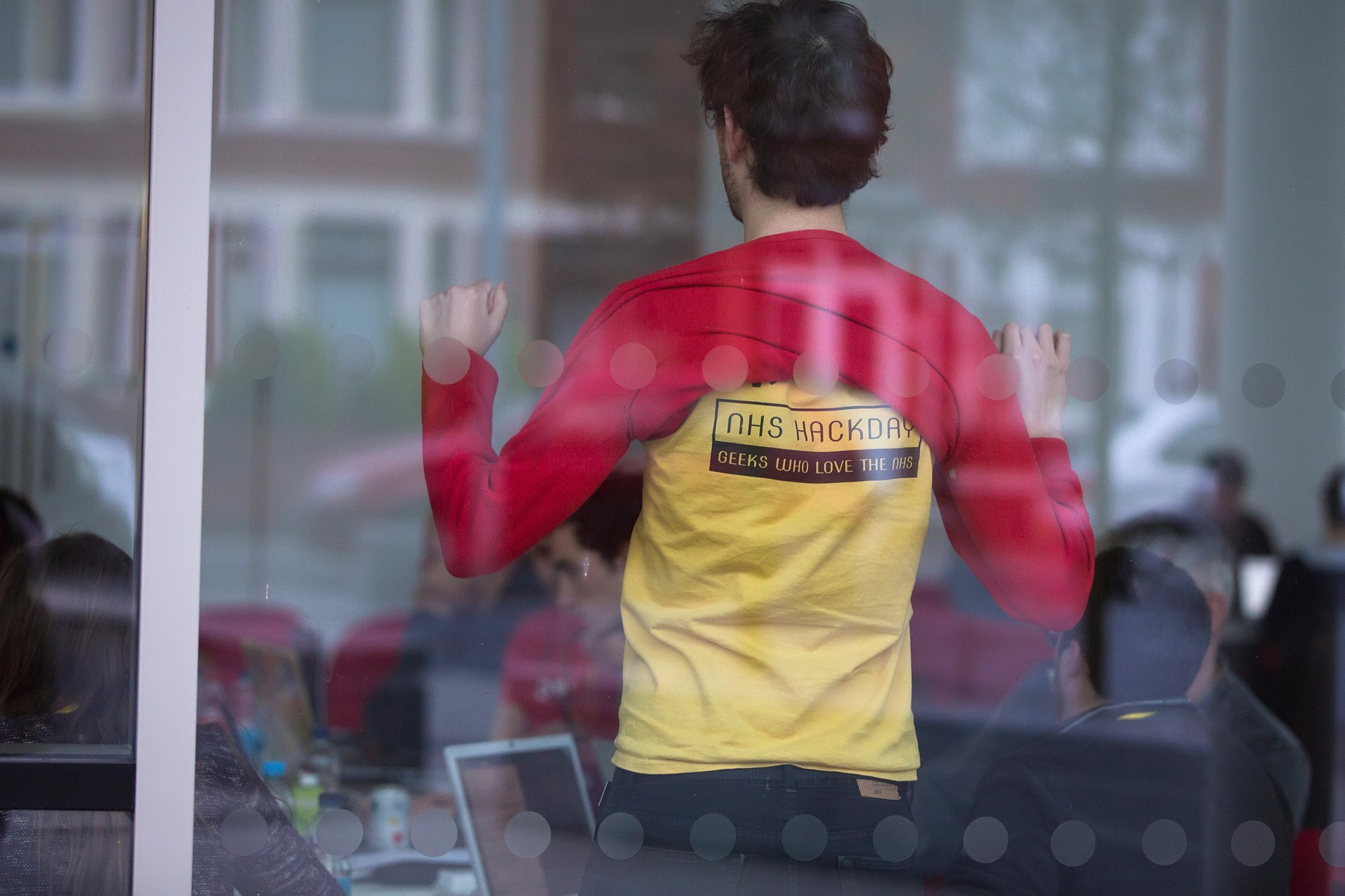 Making something. Something intangible – software – but with some visual evidence, and physical accoutrements. Here a patient’s wrist-tag, and the smartphone that’s being used to scan its data. 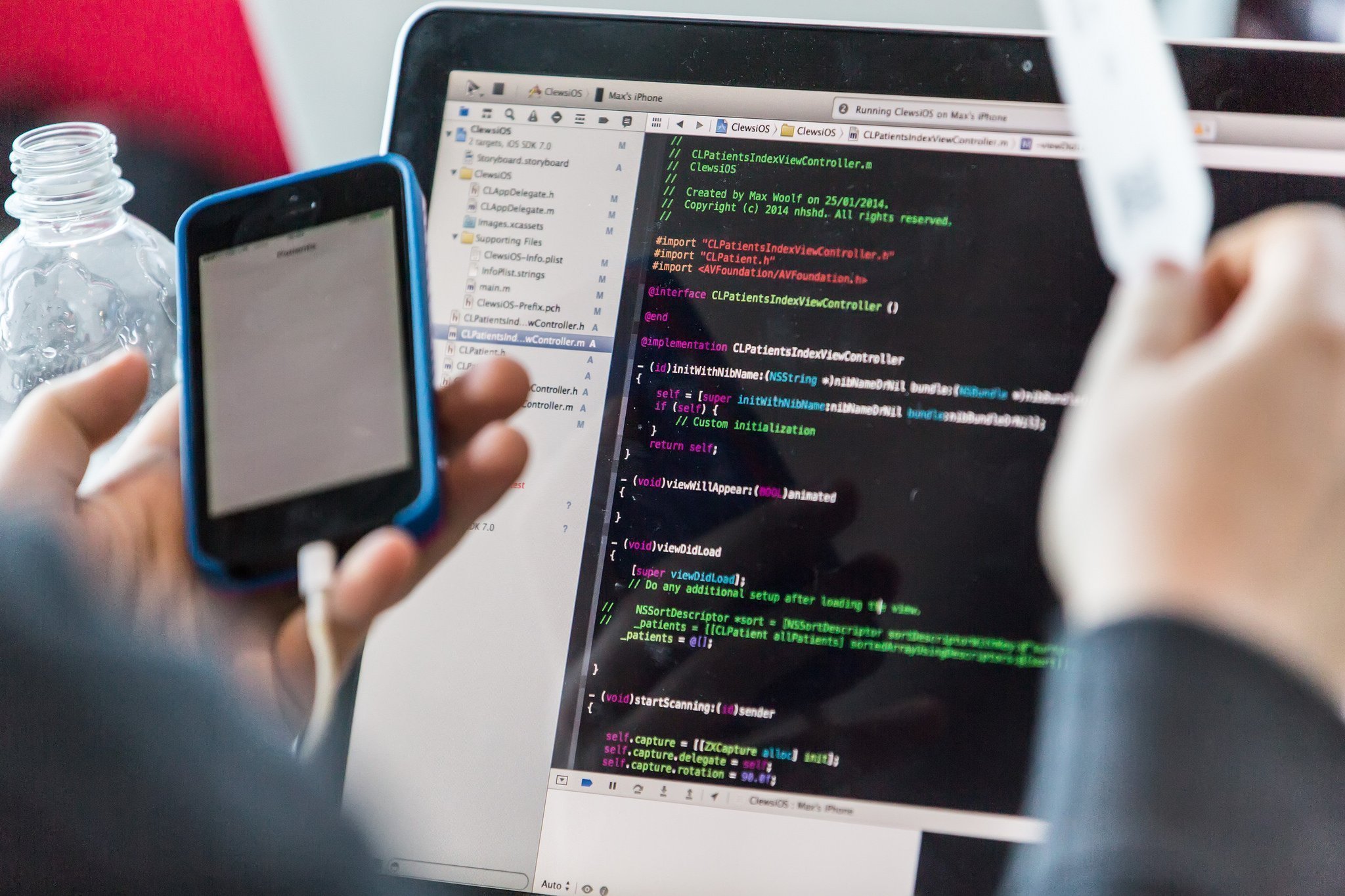 One thing that really set this event apart from many I’ve been to was the deep involvement of service users. As this was a health-oriented hack, that meant patients or those living with a particular condition. Expressing that aspect with sensitivity can take a bit of work – helped here by stickers giving the perfect description of condition, mobility and, er, Welshness… 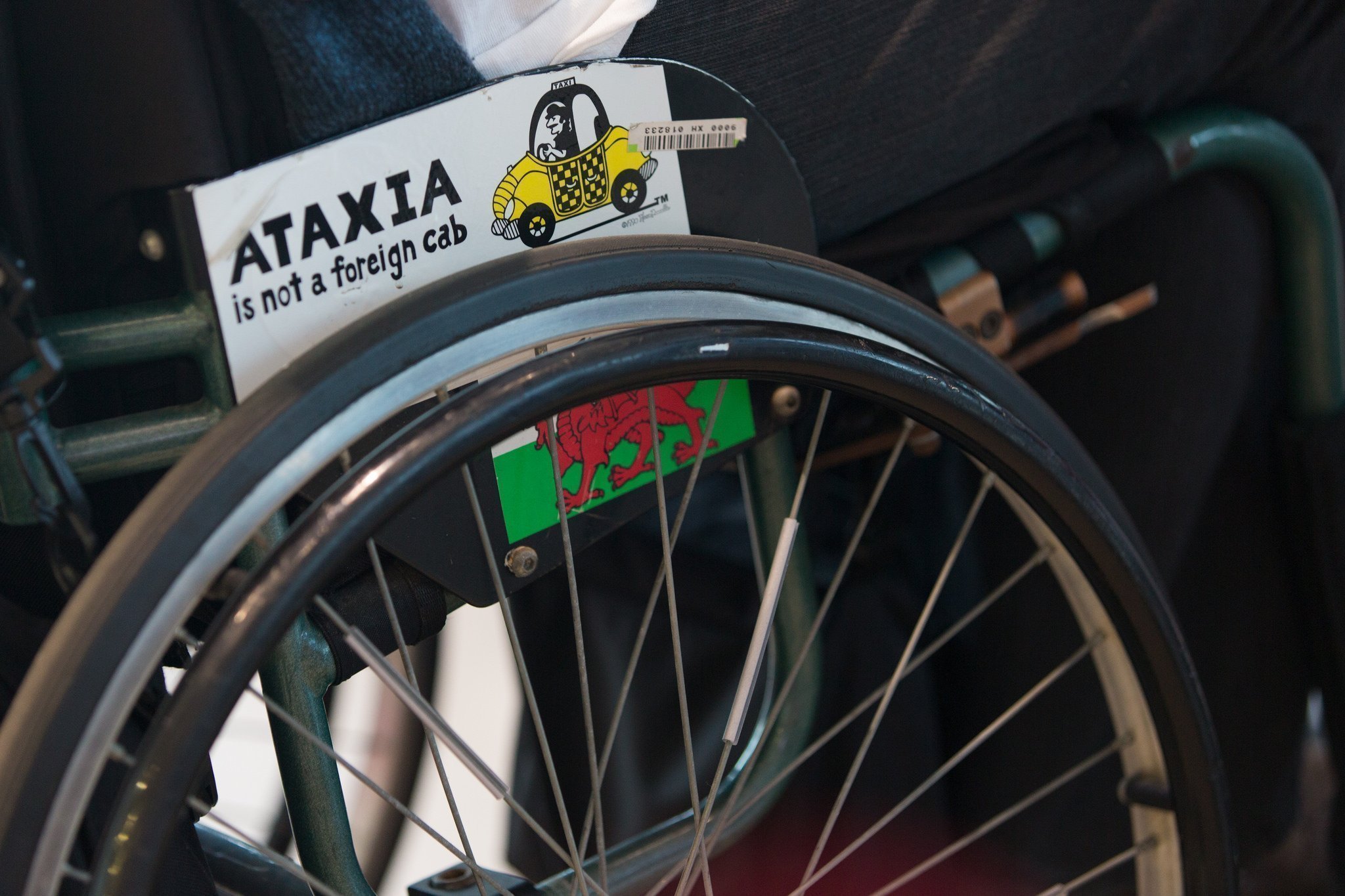 It’s not all team work. Now into the early evening of the Saturday, one of the older hackers sits alone, deeply focused, for an age. A shallow depth of field and b&w conversion help to draw out the starkness of the image. 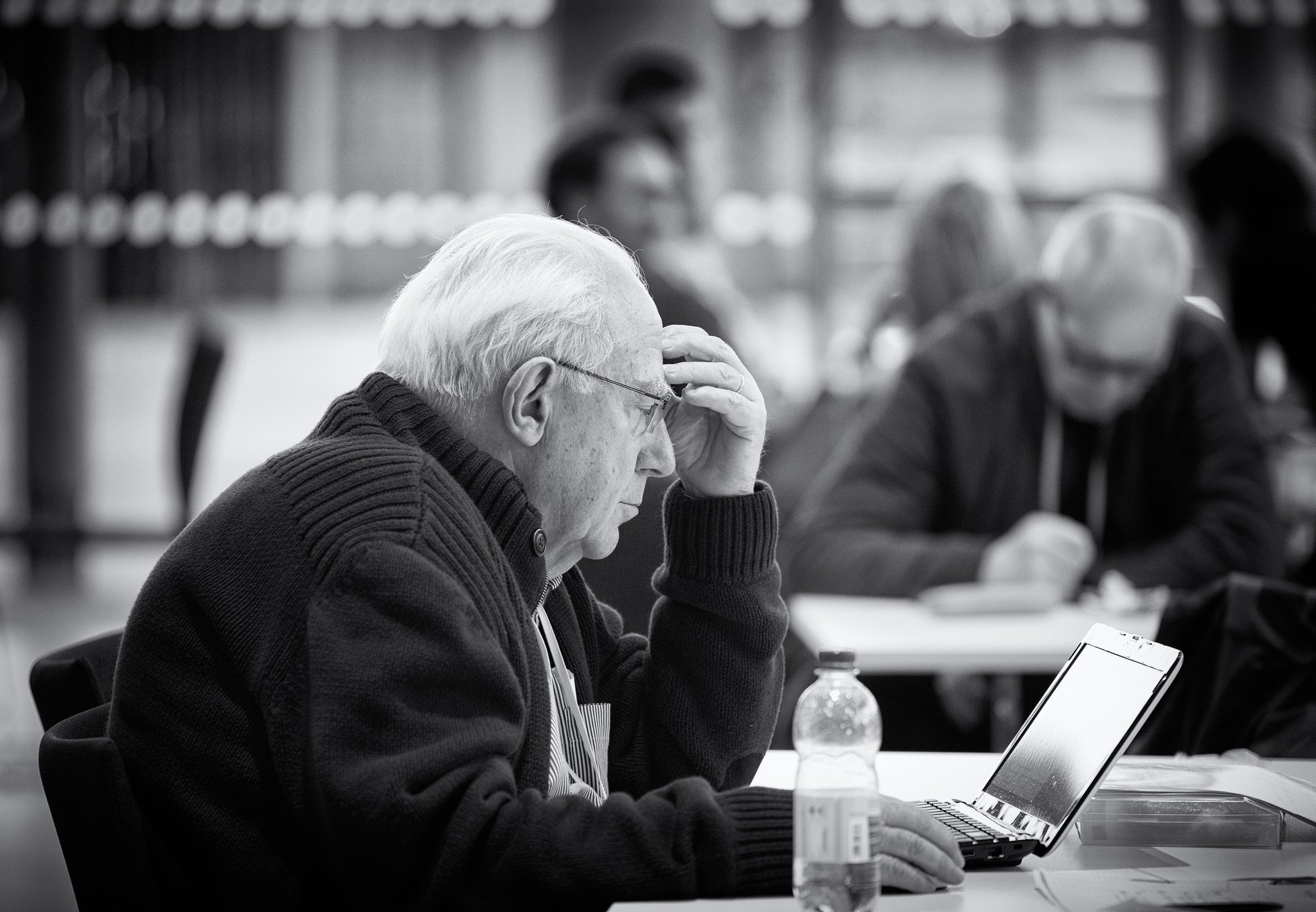 The next morning, a change of mood, and of light and weather. Another establishing shot, this time focusing on the cold and wet outside. 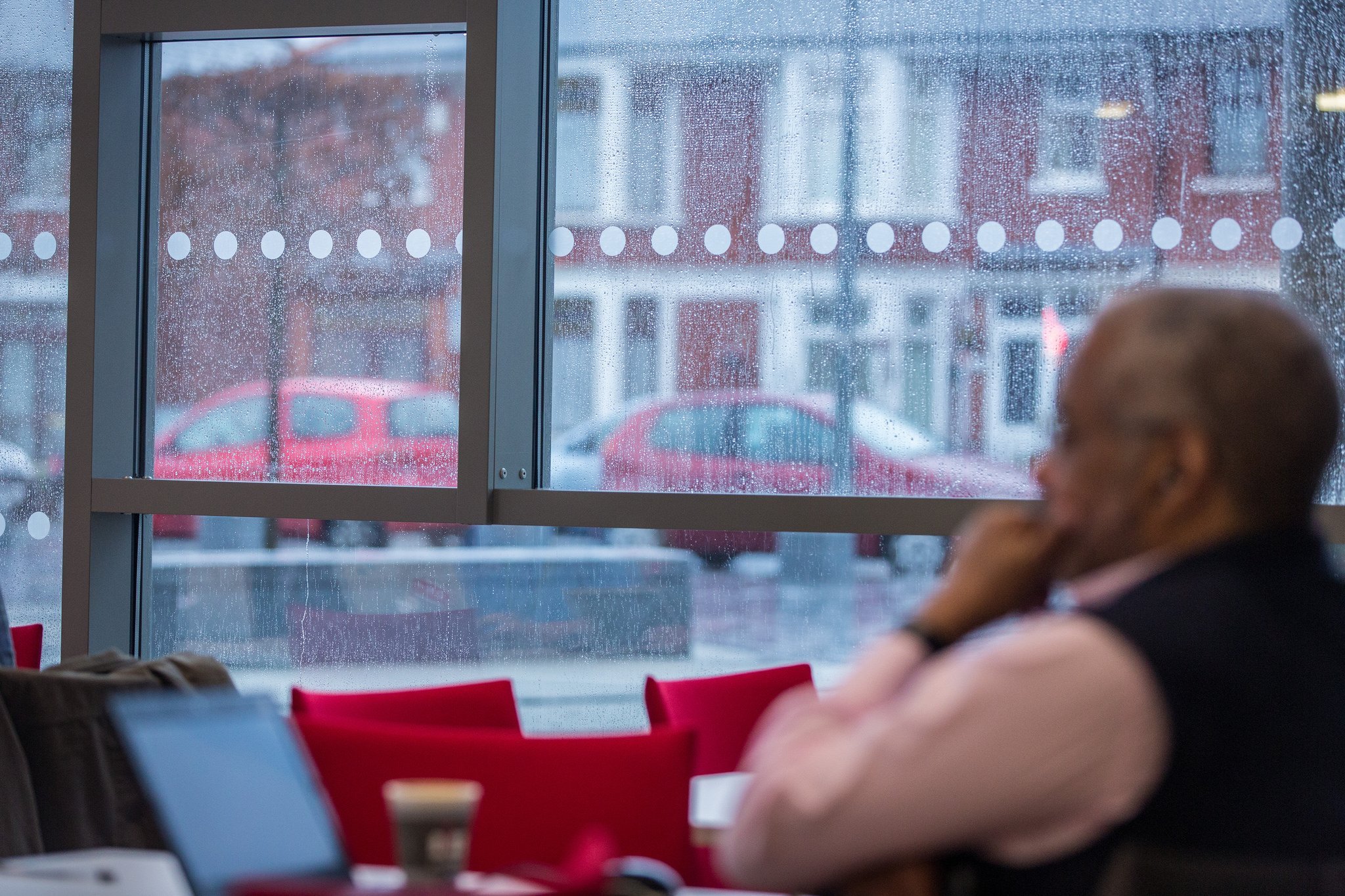 One of the service users is going to appear in one of the hacks – the team building it want a picture of him to illustrate an episode from his life. So a simple portrait, making the most of the beautiful Hadyn Ellis building (you might have seen it used as a location in Sherlock). And I had to ask the subject to take off his jacket once I spotted the T-shirt underneath… 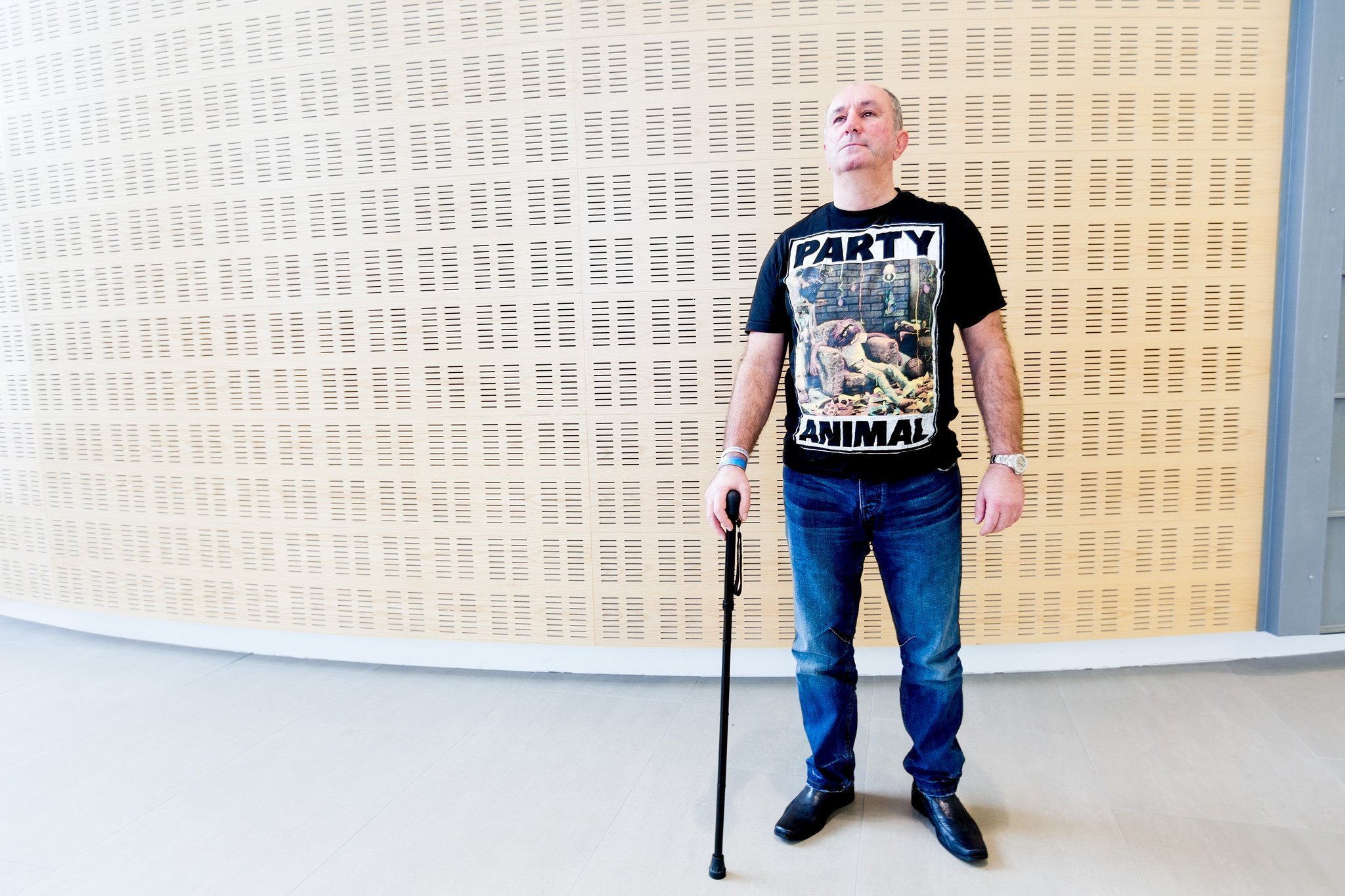 Middle of the day, and a bit more playing with the features of the building. From the balcony, an in-camera HDR shot – helping to capture within one image the wide range in light intensity from the foyer interior to the winter sunshine outside. One of the problems with wide angle shots like this is that they can really make the centre of the image feel very far away and insignificant. There’s a little hack (of sorts) you can do in Photoshop to very slightly bloat the image so that the centre gets bigger, and more in balance with the edge areas. The giveaway is the slight curvature you can see at the top of the windows. 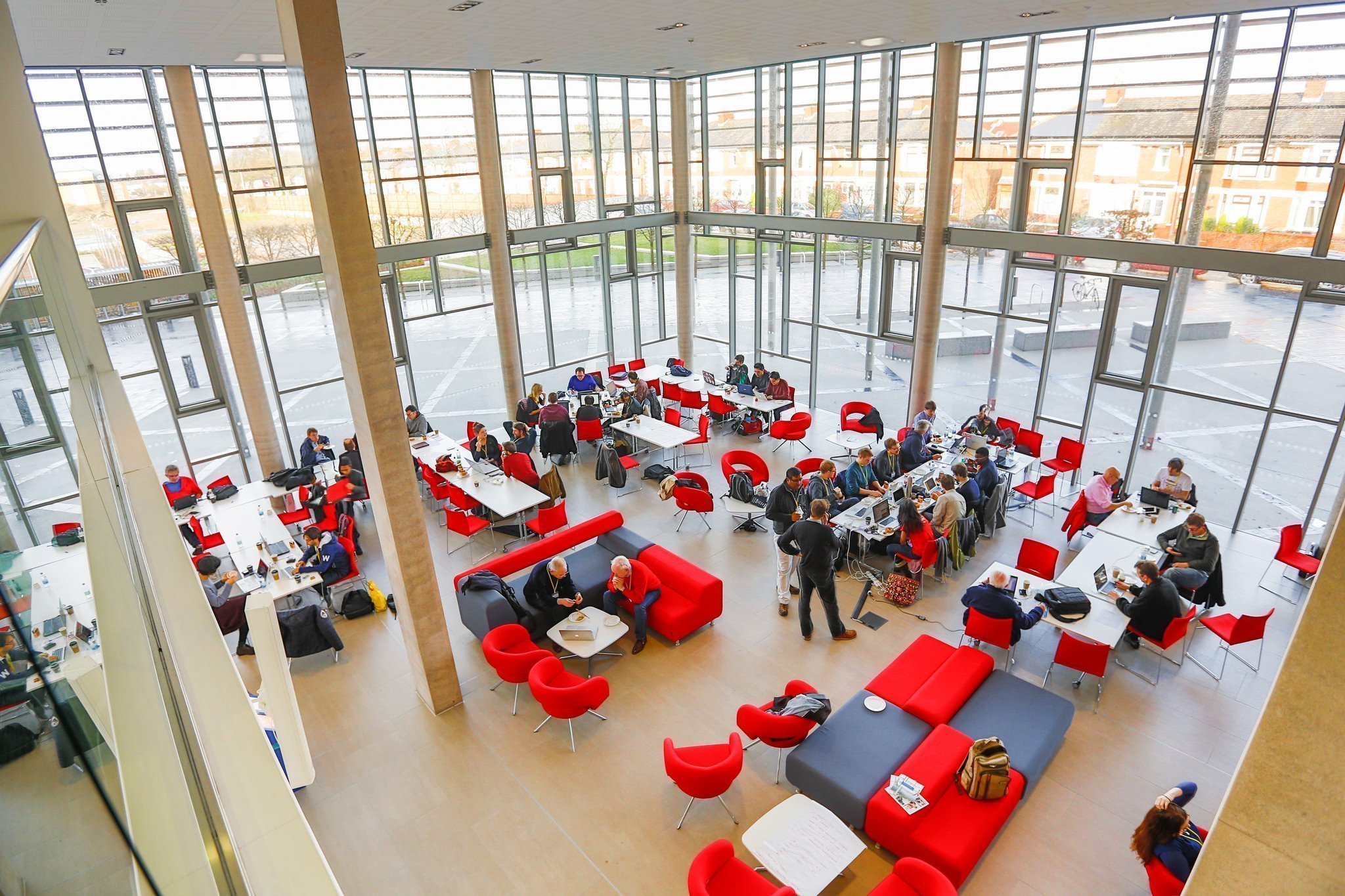 Finishing moments of the hacking, and just before they present their work the teams split up across the building to find a bit of space to rehearse. Another wide angle (spot the curvature again), but this time with a strong foreground subject, and a little bit of work with a Color Efex Pro filter to add some drama. 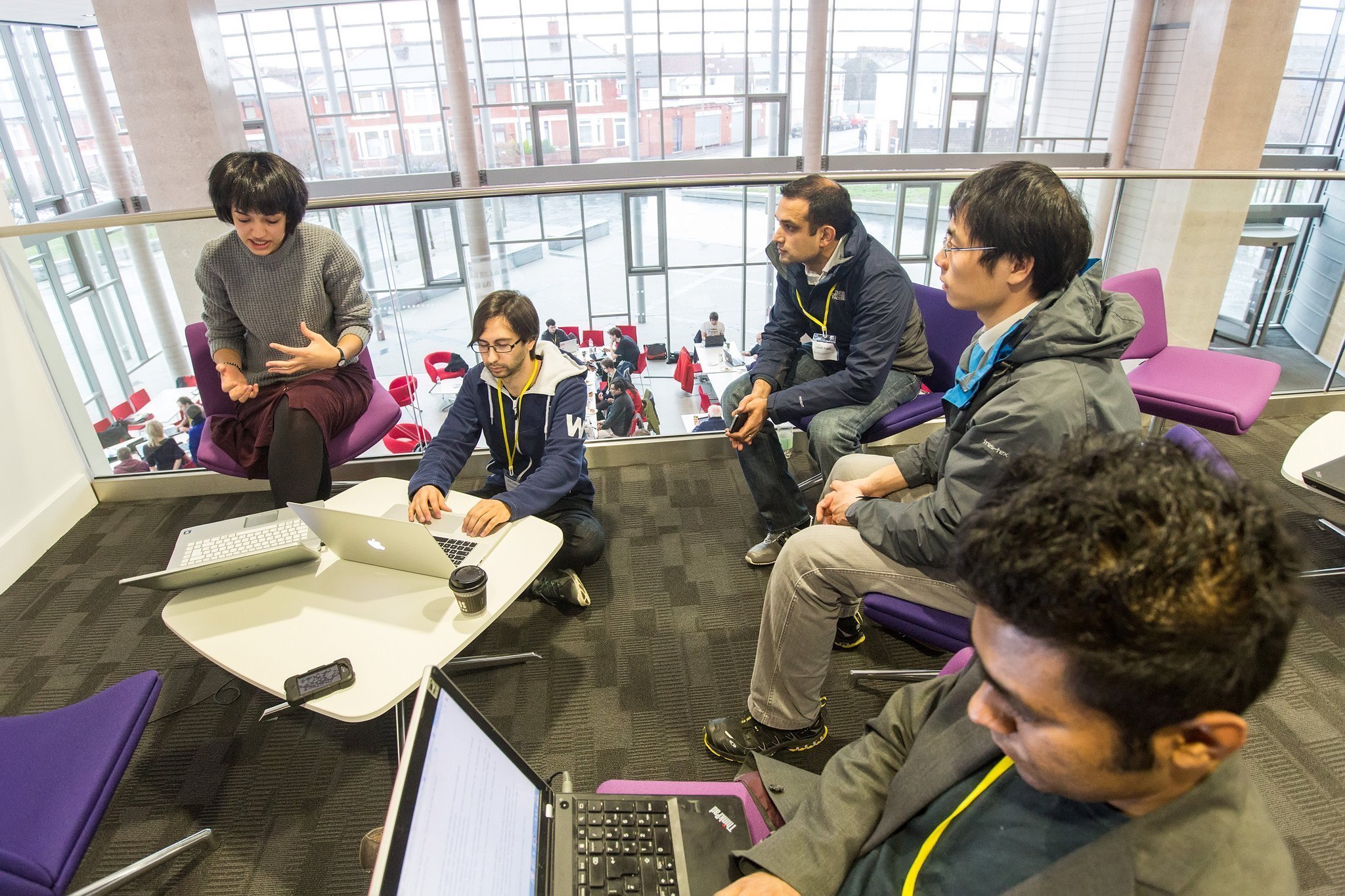 Now into the presentations. These people are terrifyingly smart, and brimming with enthusiasm to tell the stories of their two days of creativity. What had been a visual eyesore for me to work around (the oh-so-modern overhead projector arm) becomes part of the framing of the image. Pretty much flat on the floor to get this one. 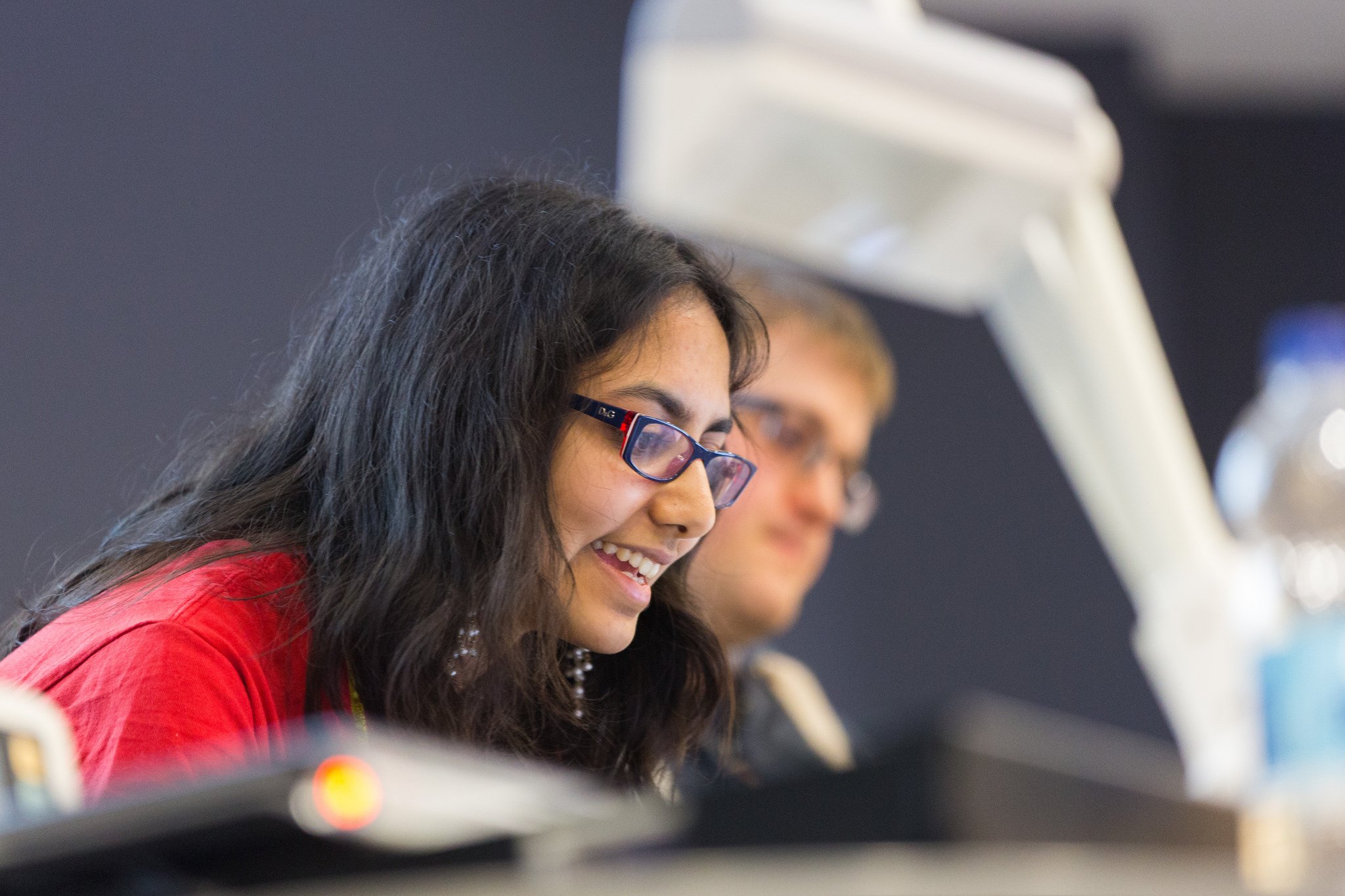 Another careful choice for a b&w conversion. When and why these work well will have to wait for a separate post, but here it was the relative position of both pairs of hands that swayed me. Making that as strong and emphatic as possible was my goal, and with shape and definition more important than colour, a Silver Efex Pro filter did the job in a moment. 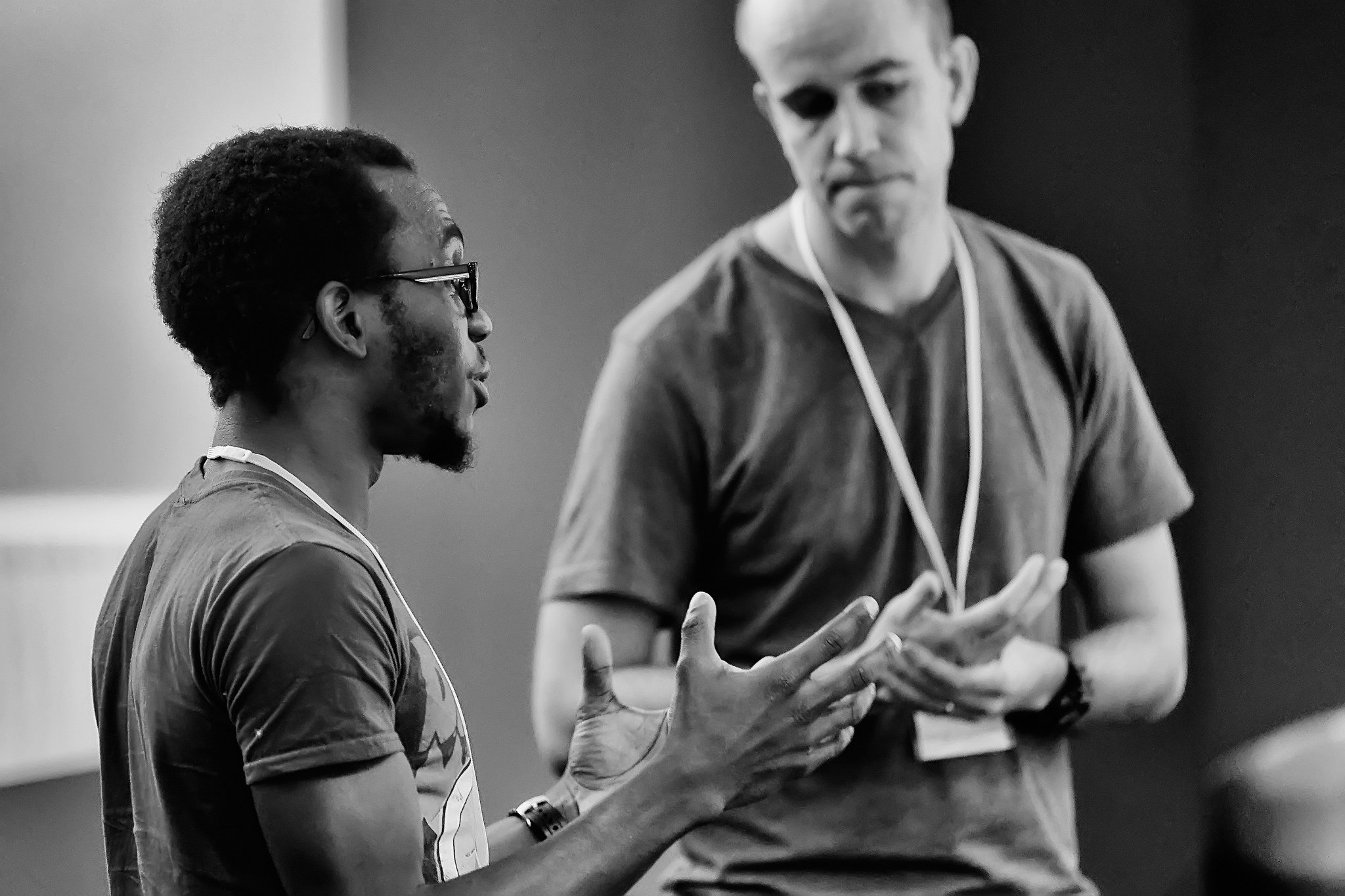 People talking about software can be a challenge for a photographer, but when they’re demonstrating an eye-tracking app…we have focus, intensity, and a nice bit of screen light back on to the face to help make things a bit more striking. 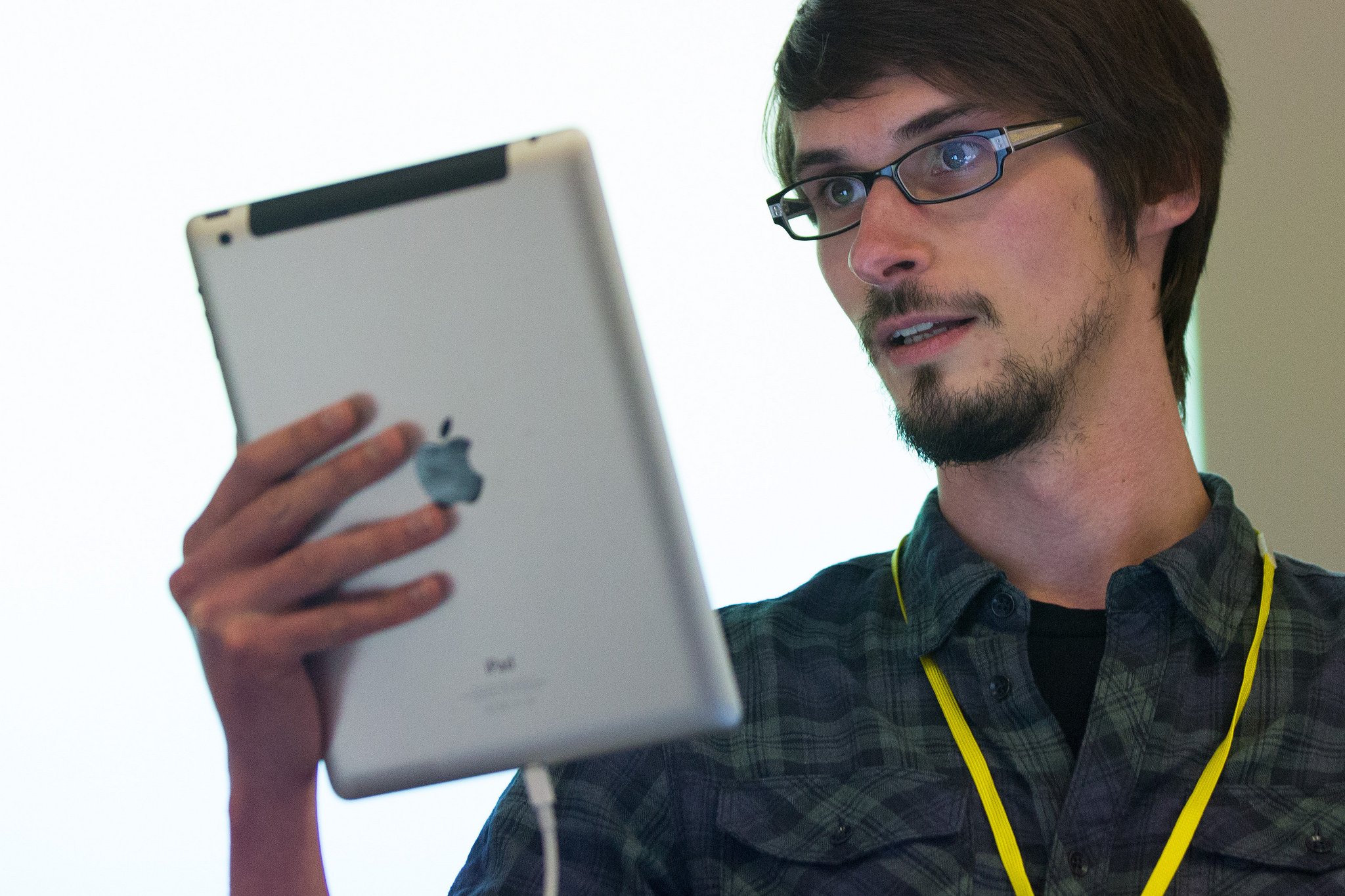 Ah yes. The Geek Saint shot. Not the first time I’ve done this one. Spotted it, got as low and right as possible (without being that attention-seeking, rolling idiot we’ve all seen), in and out in a couple of seconds. Not quite perfect with the head position, but I’d been hanging on for a slight right movement from the speaker to avoid having a really ugly intrusion from the screen on the right of shot. It didn’t come before the slide moved on. That happens a lot in event work. The “nearly” shots haunt you sometimes. 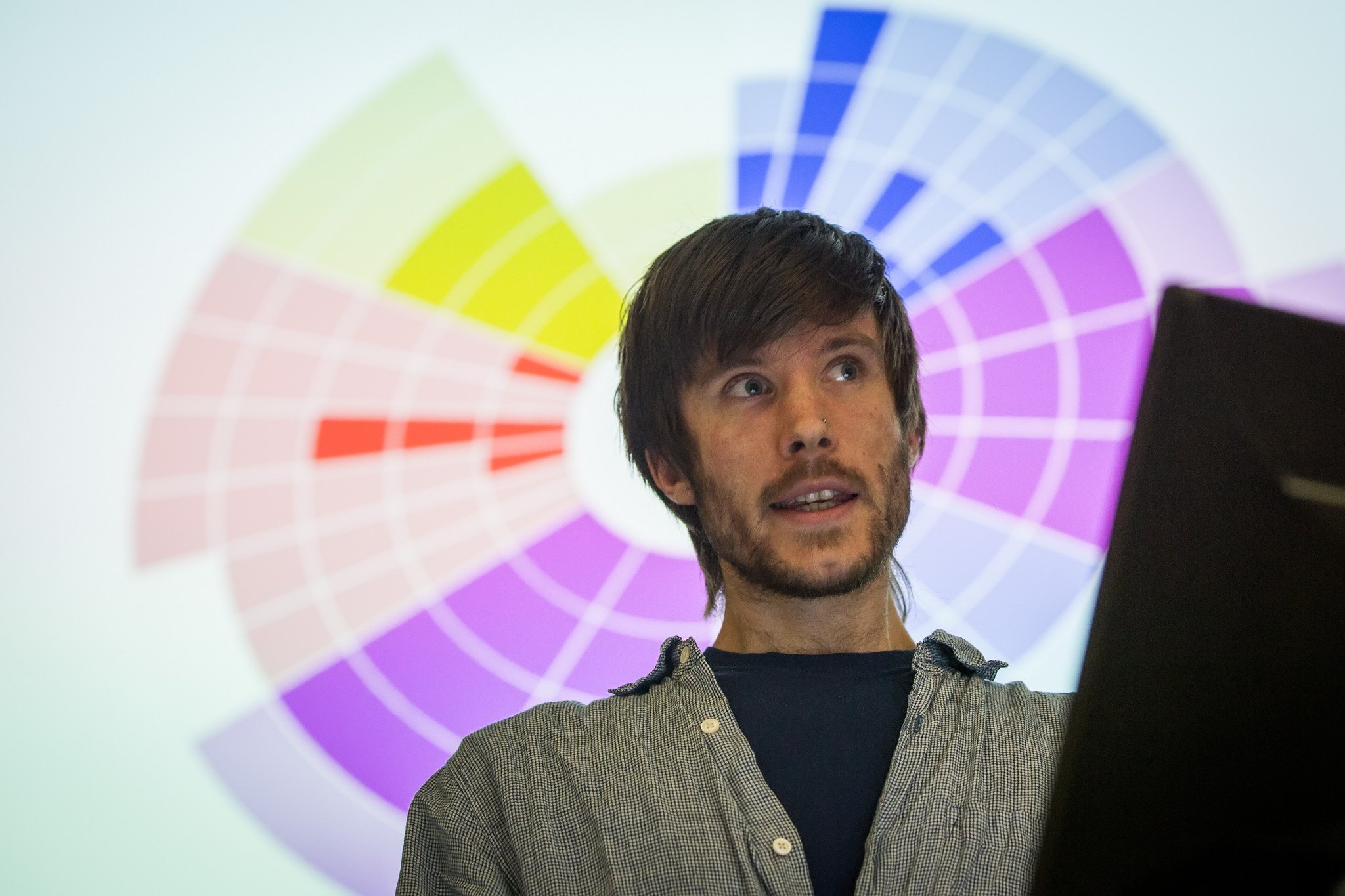 Judging time. Locked away in deliberation to pick the winners. I could have popped in to get a shot of the panel, but much more fun to play with the “behind bars” motif of the blinds. Yes, that is my reflection in the middle. It was better than the other options involving a more angled shot. Trade-offs, always trade-offs in photography. 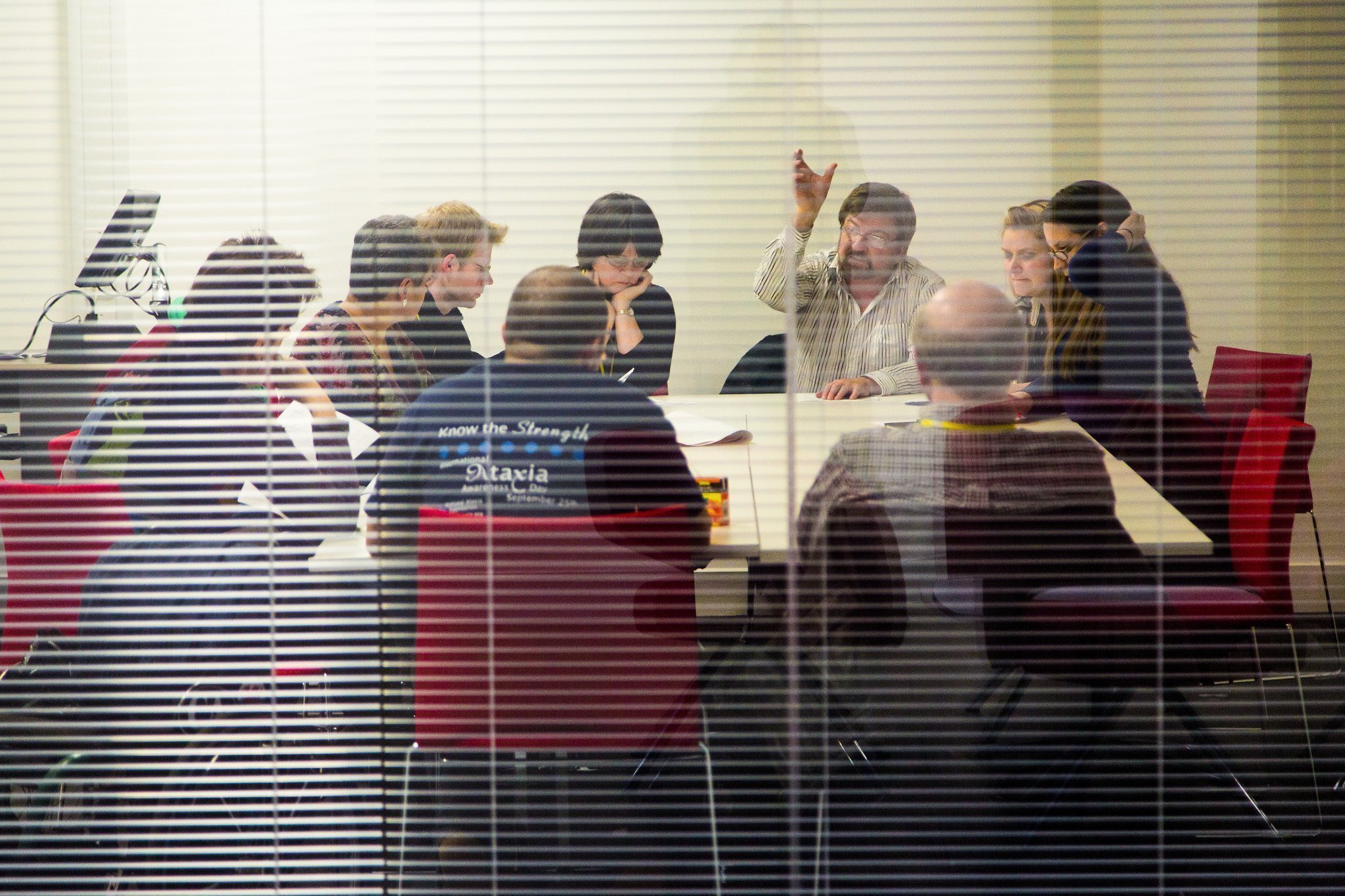 And finally…bringing everything back together, Anne Marie celebrates with flowers and a massive sense of relief. It all went bloody well, really. This is a good post about the event; as we agreed a form of open licensing for my photos, the author has been able to use them to help get the message out. 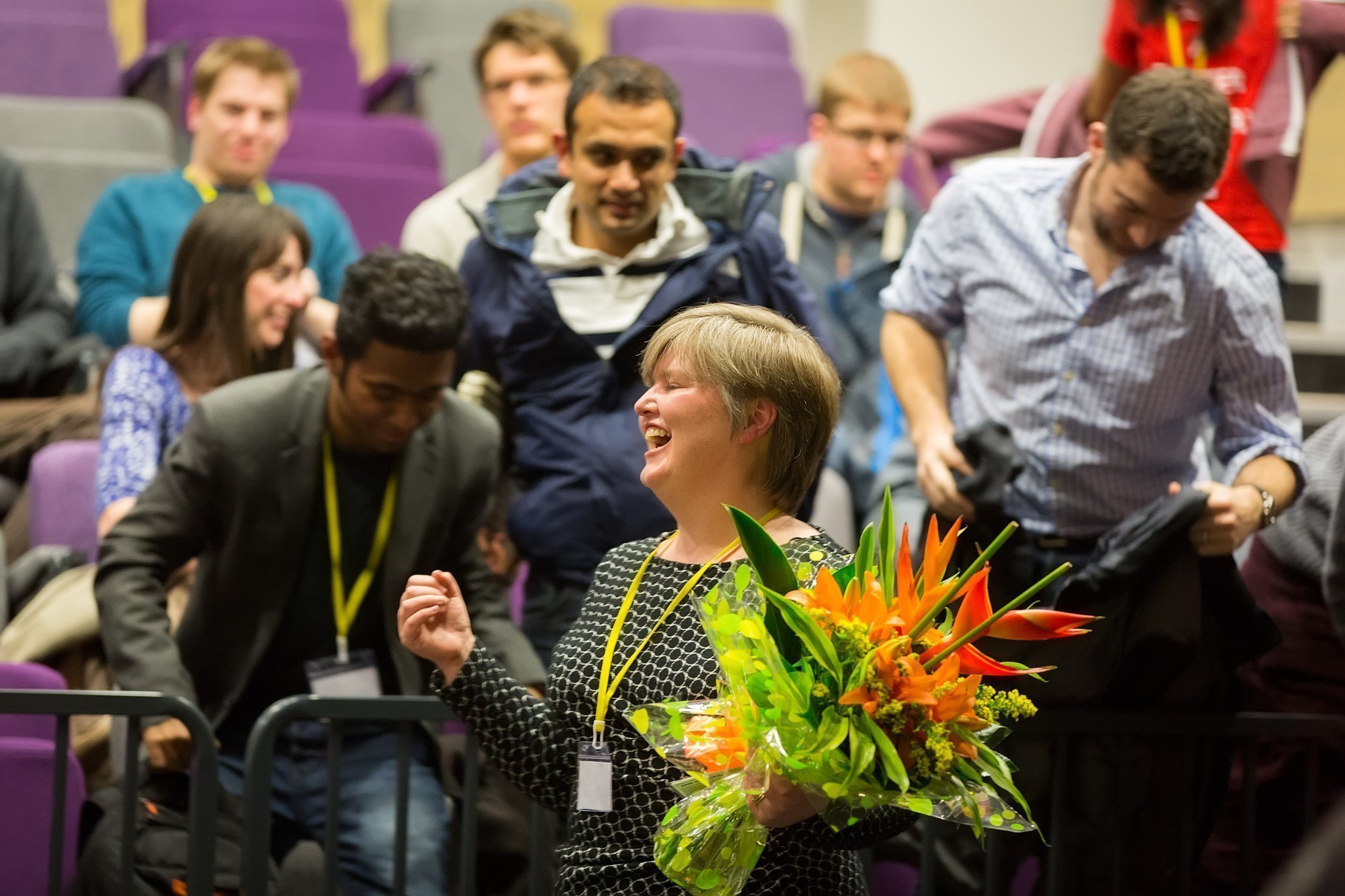 (Clicking on these pictures should open them up in a lightbox – you can then use arrow keys to jump between them.)