Yesterday was our street fair, a delightful bit of Surrey tradition that brings together coconut shies, pony rides, Punch & Judy, terrifying tat stalls and of course the East Surrey Morris. Dancing, as they tell us proudly, in the Cotswold Tradition.

I take a few pictures every year, and the dancers are always good for a strong image or two. Here are a few notes about how I got the picture I was most pleased with.

For me, good action shots in event photography are heavily dependent on composition. You can have the most interesting thing happening, but if it falls weakly in the frame, it’s not going to be a great picture. So I do a lot of thinking about the principles of composition when I set up a shot.

When they started their set, I could see a few compositional possibilities straight away. First, lots of the moves involved them being regularly spaced. This enables use of repetition, and the creation of visual ‘lines’ to give a sense of unity and form to the photo. Standing in rows across the camera’s lens, I thought of these as ‘ranks’; standing square to the camera, as ‘lines’. And the third natural pattern was the circle; whether wide and moving, or tight together.

I’d used a ‘ranks’ approach last year, so I was keen to find another angle: 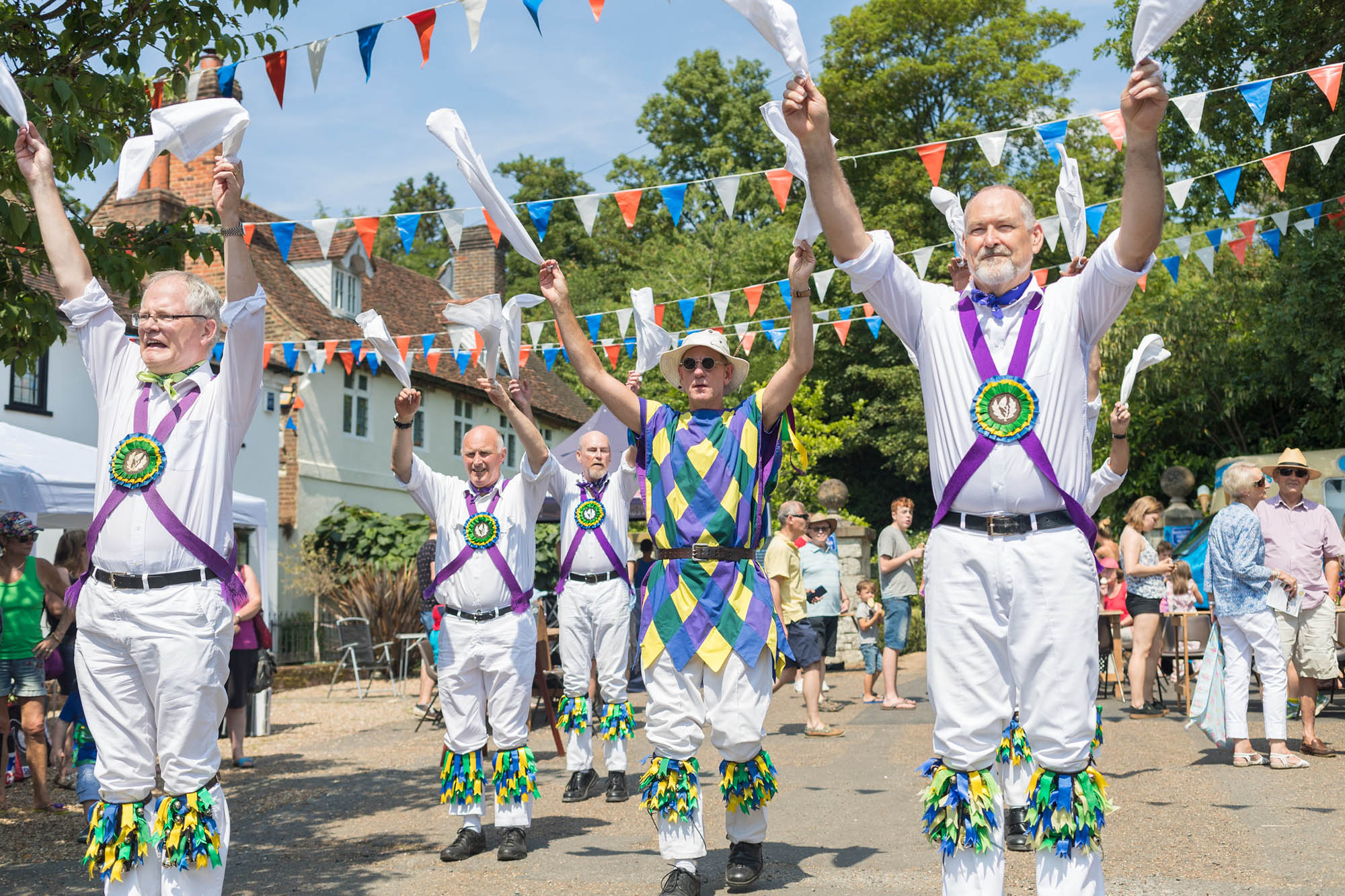 The circle had potential as a tight composition, but wider whirling made it hard to see a shape or structure I could work with: 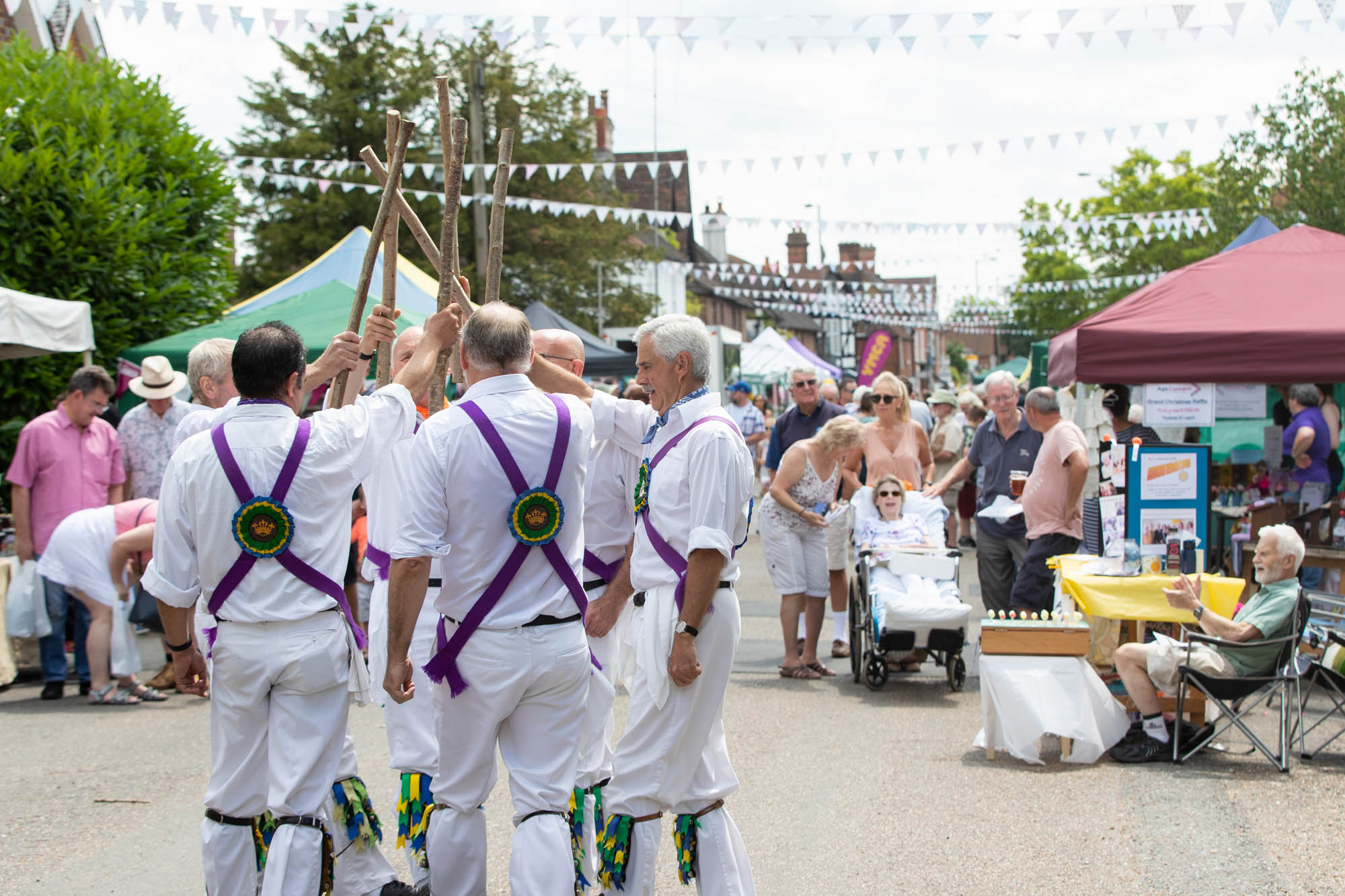 This angle was nice, and also showed a bit of the street’s lovely buildings, but I knew I could find better. 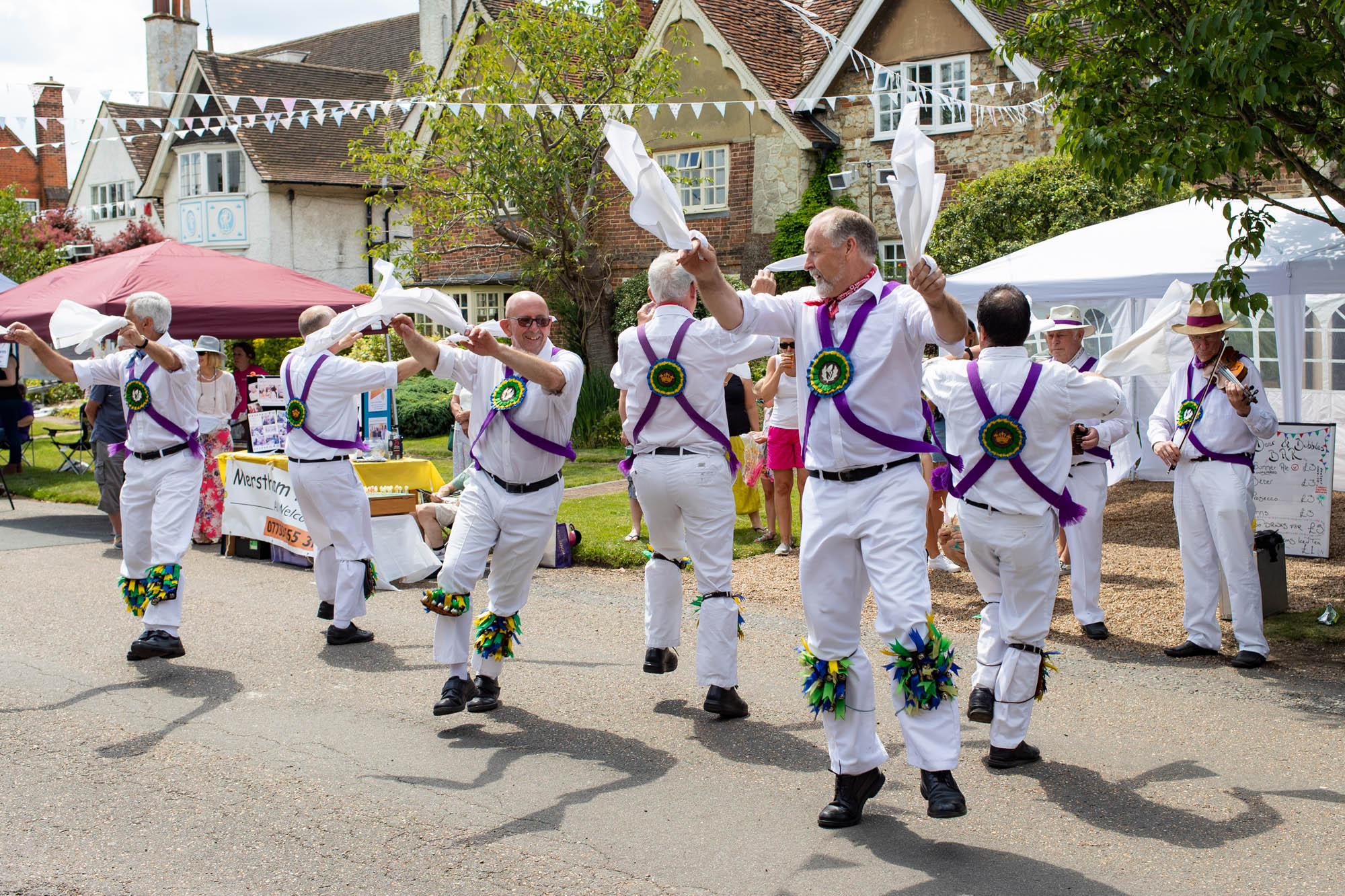 After dancing with the hankies, out came the sticks, and this formation – much stronger. 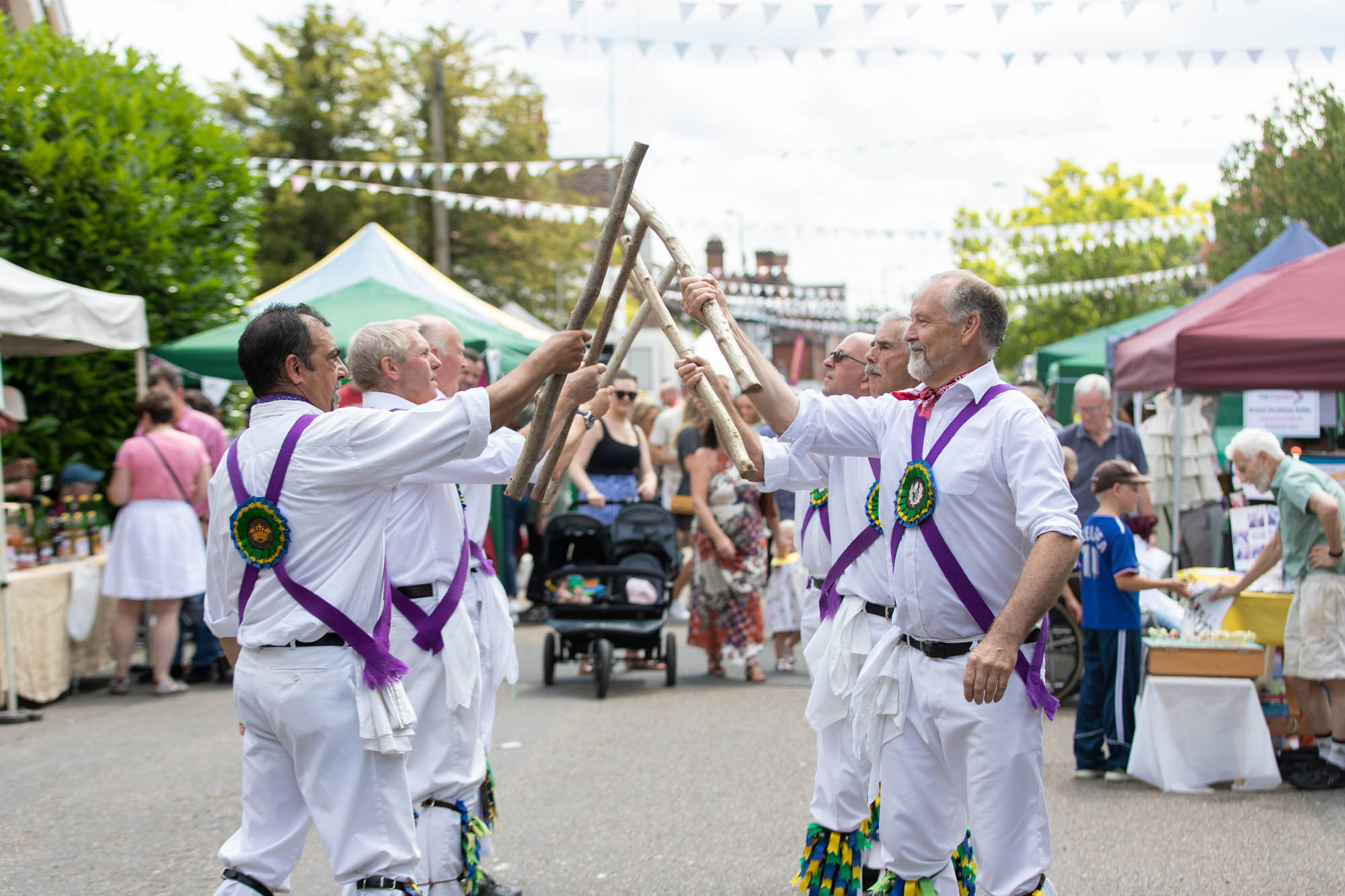 The problem with that frame was I couldn’t quite get perfect symmetry. To trim it to symmetry, I’d need to lose some of the interaction of the two figures on the right – and that would break another of my compositional rules about not having incompleteness at the edge of a frame.

I was still thinking about whether this rule was worth breaking here, when the stick-clashing part started. And here was the shot – because they were getting really stuck in. Hugely into their “adversary” roles, and whacking and shoving for all they were worth. 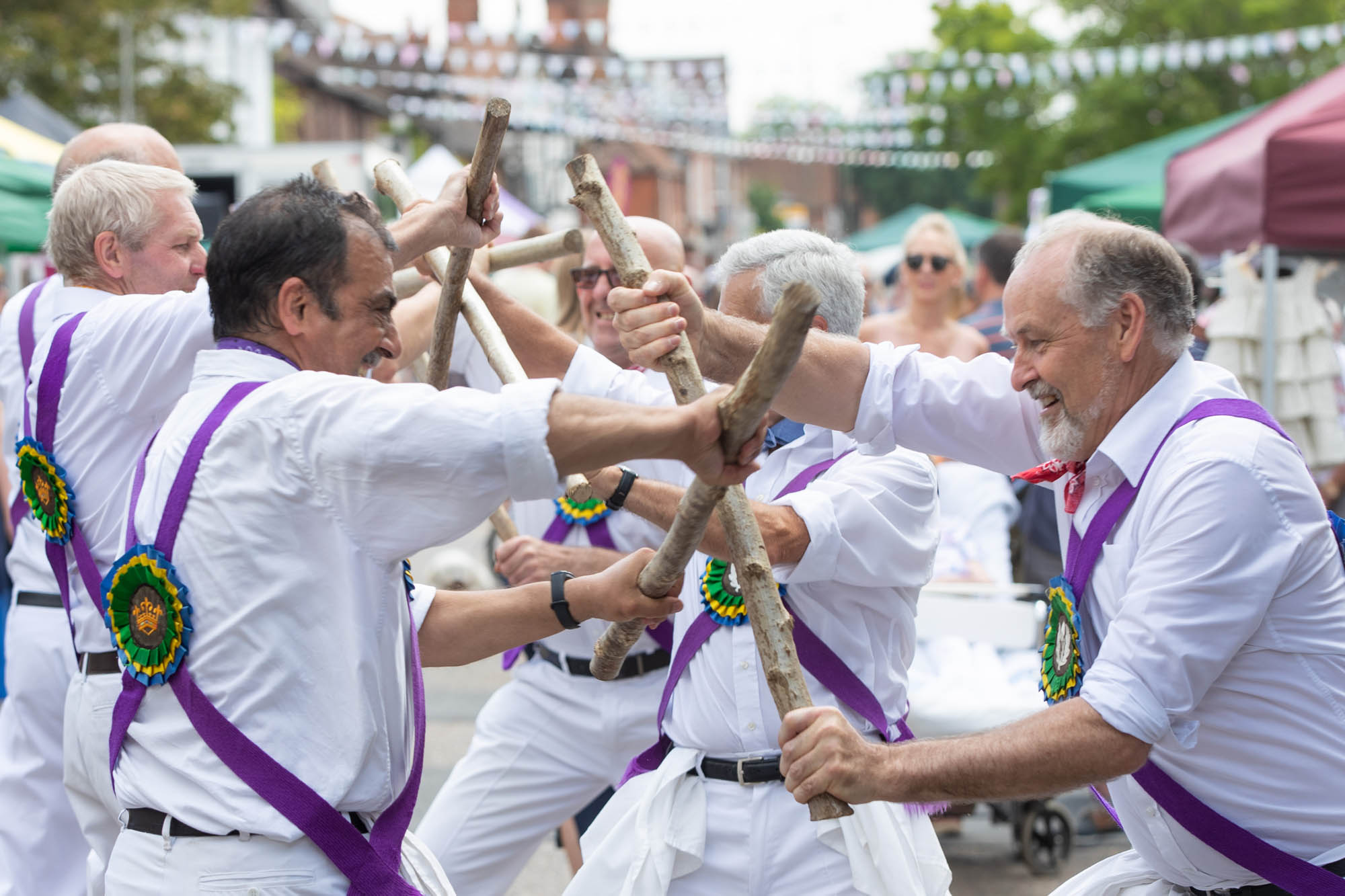 The second thing I look for after a good composition is personality. Where’s the best “human story” in the picture? Who’s enjoying themselves the most? And who isn’t? What’s going to lead the eye of the viewer, and give them a chuckle, or a sense of recognition?

Last year there were two natural focal points: the hobby-horse, and the Fool. 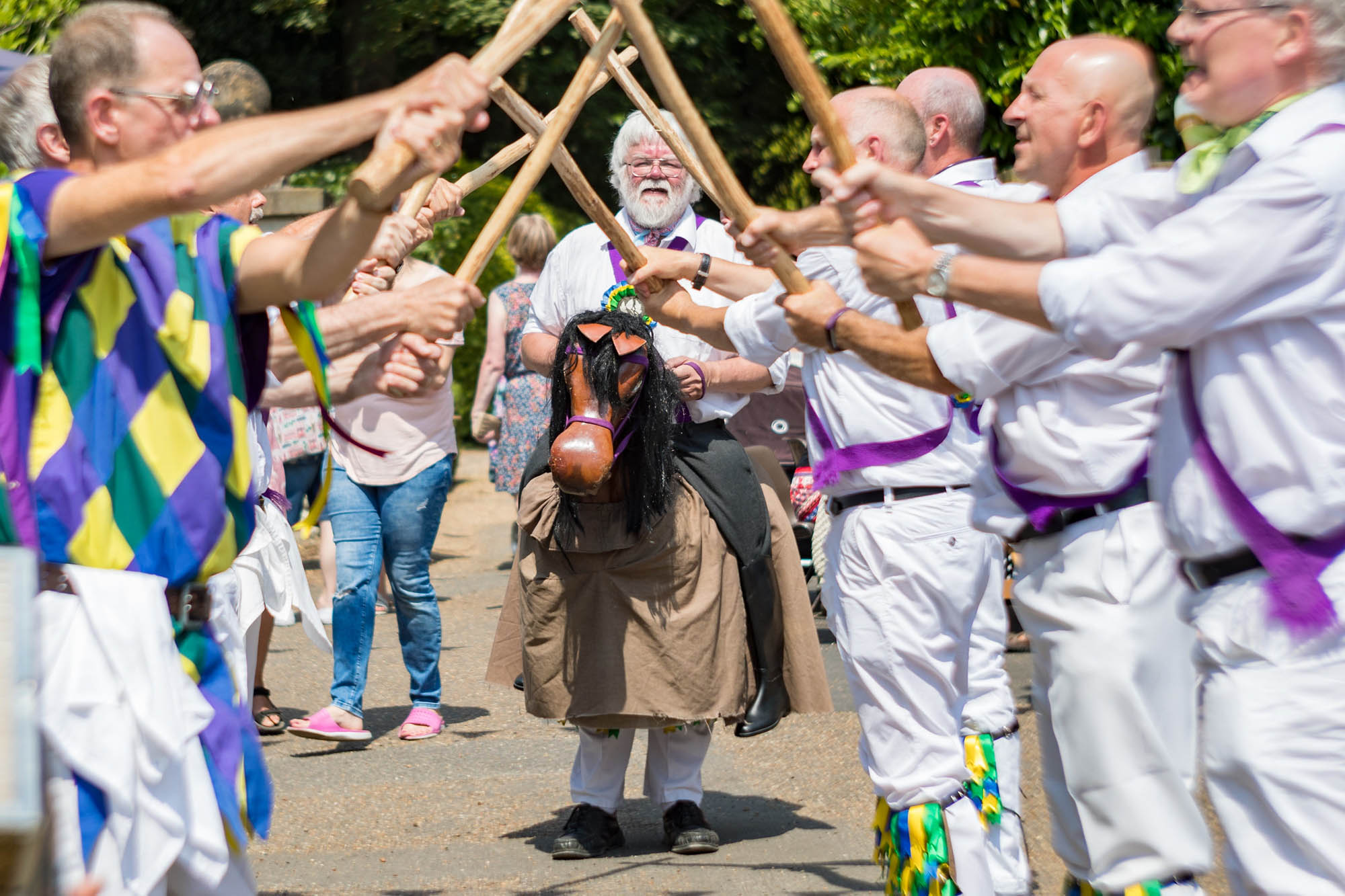 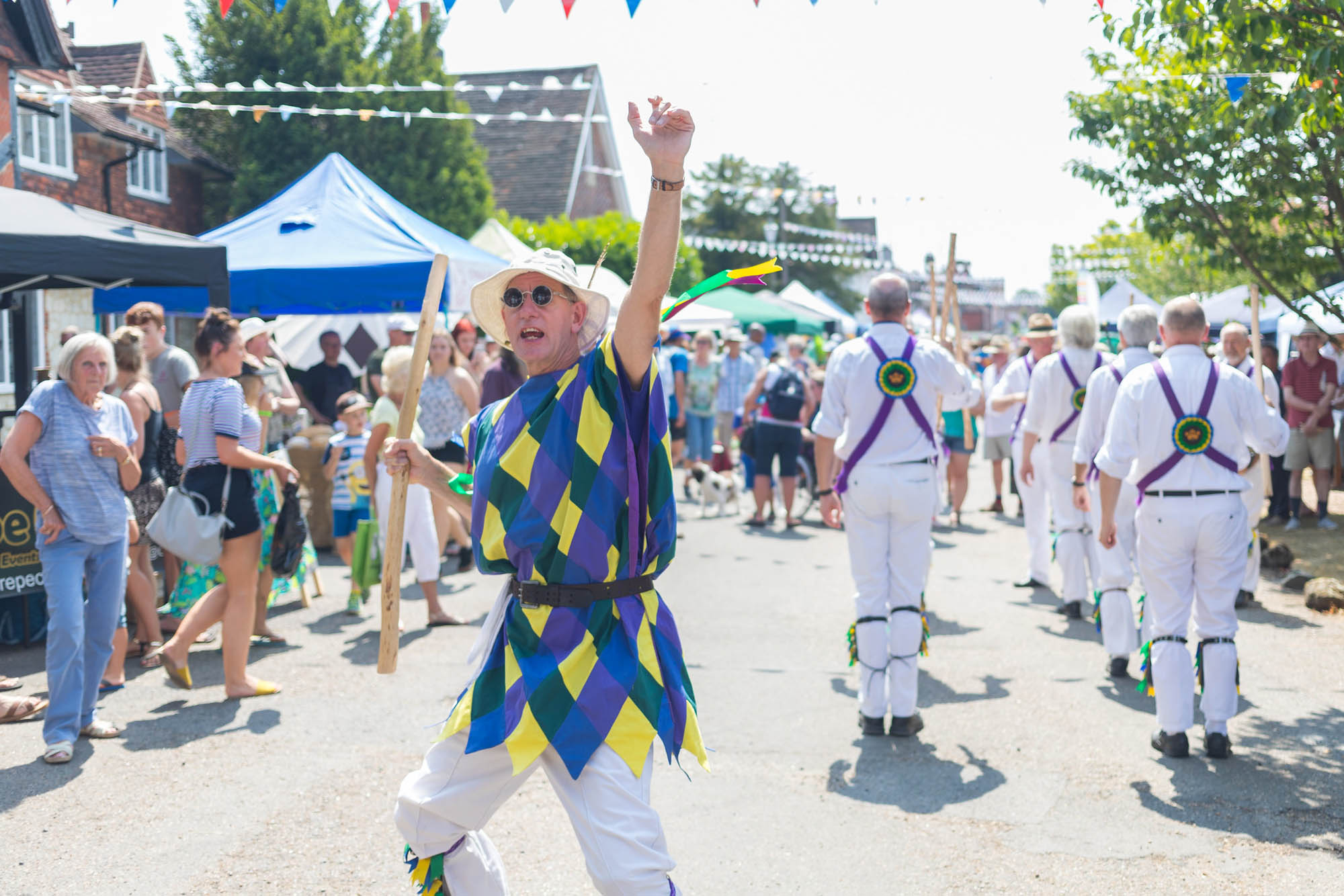 They weren’t in this dance, so I was going to have to pick on someone else.

The ‘leader’ was a strong contender, and I’d had a bit of fun with this one earlier: 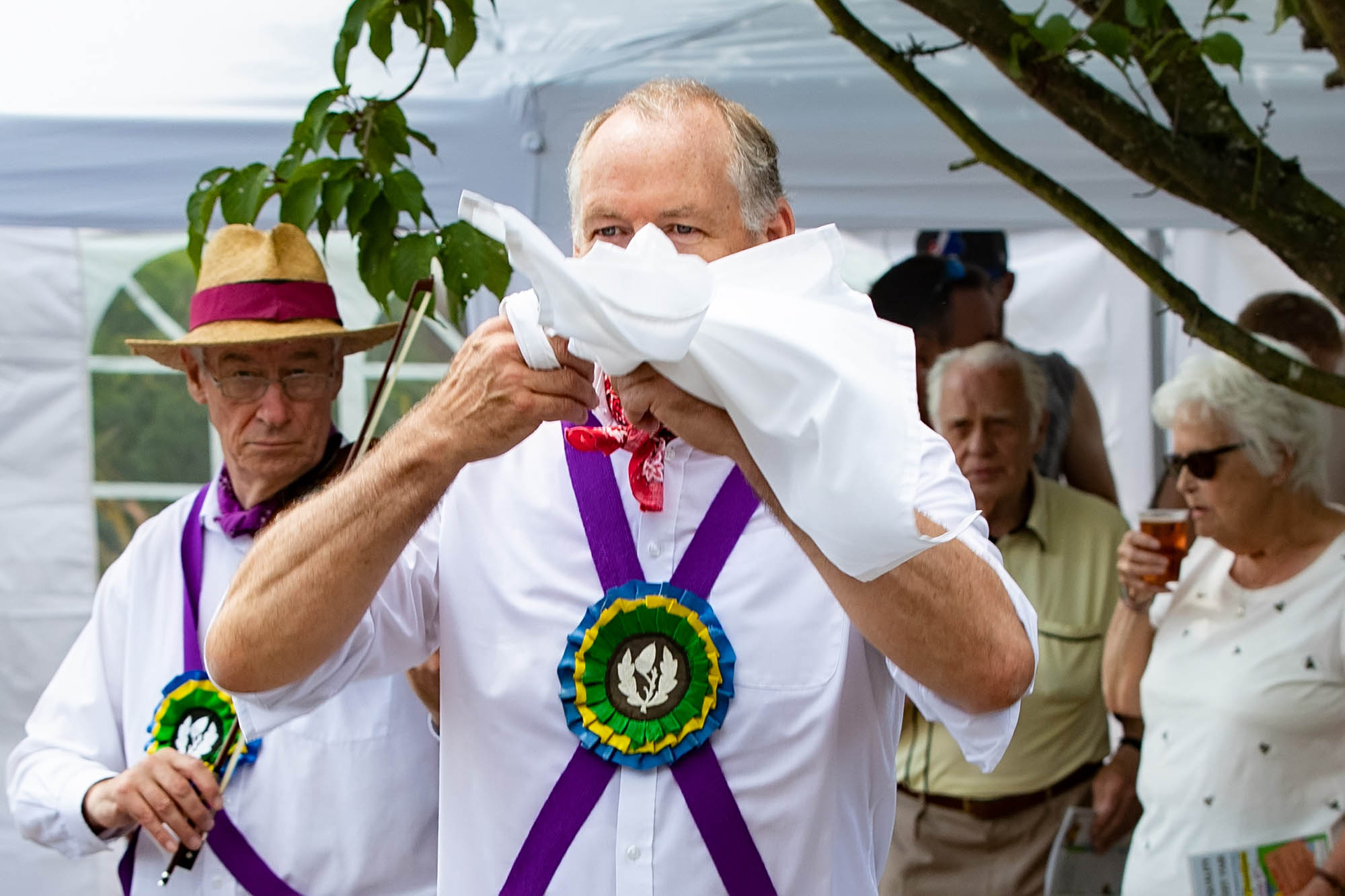 Then I saw this guy: 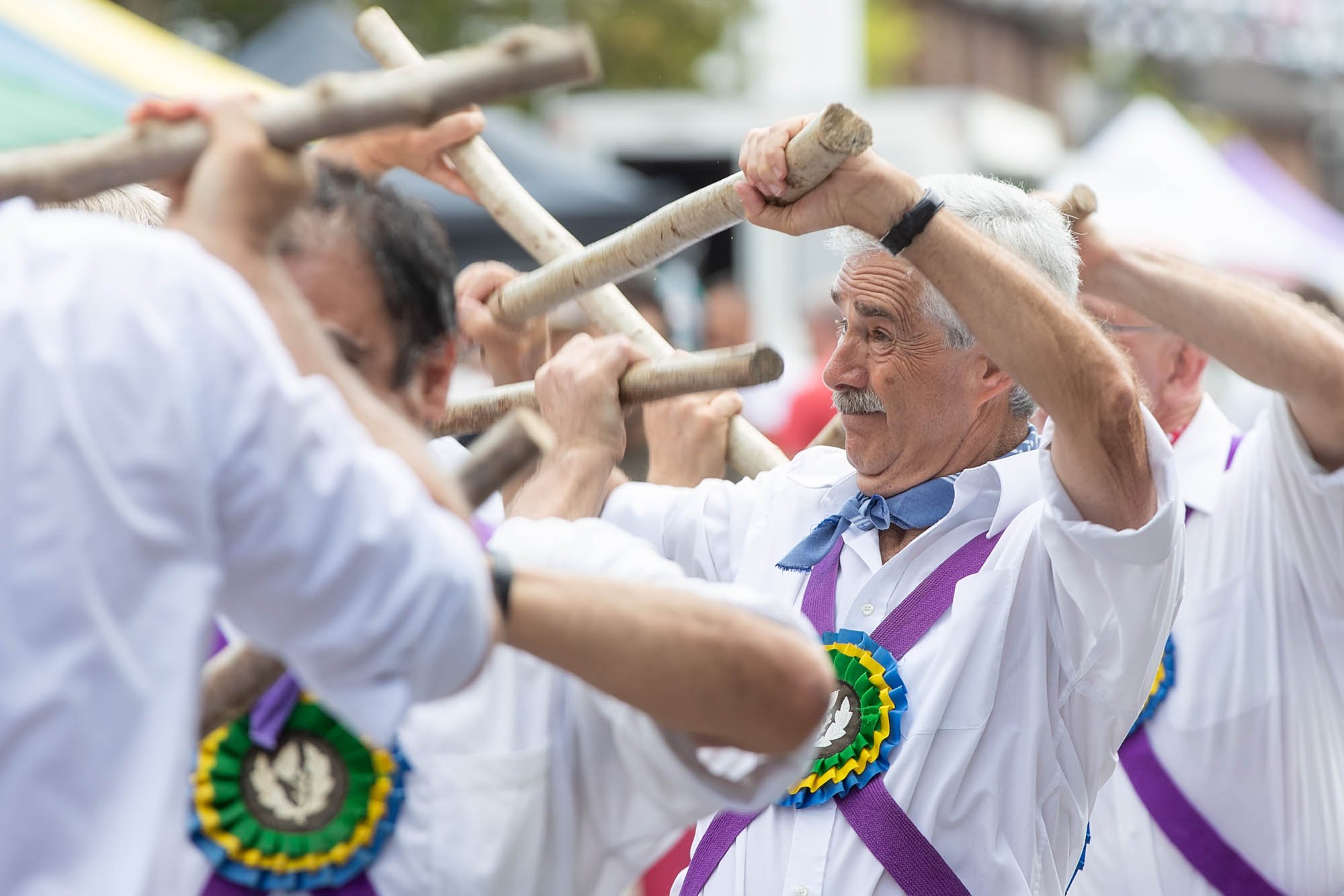 Giving it everything – heart and soul. He was my target.

The dance had a pattern to it – whirl around a bit, then form up into lines and bash-bash-bash. Whirl, bash, whirl, bash, repeat. So I was helped by knowing what was coming, and could prepare. I wanted to pull him out of the pack a bit using a shallower depth of field, so I set the camera to do that. Meaning that he’d be in focus with everyone else a bit blurrier, but also meaning I needed to be quite precise in getting him in focus to start with.

Unlike an off the shelf consumer camera which uses a half-press of the shutter to do the focusing before the shot’s taken, lots of professional cameras are set up so that a separate button, on the back, does the focusing job. That means the camera can be prepared with the right focusing distance, and pressing the shutter won’t mess it up. (You can do the same thing by turning off autofocus once you’ve set the lens to the right distance, but I prefer to do it using a back button.)

I set the distance so that my mark would be in focus, and from there it was just a matter of waiting… 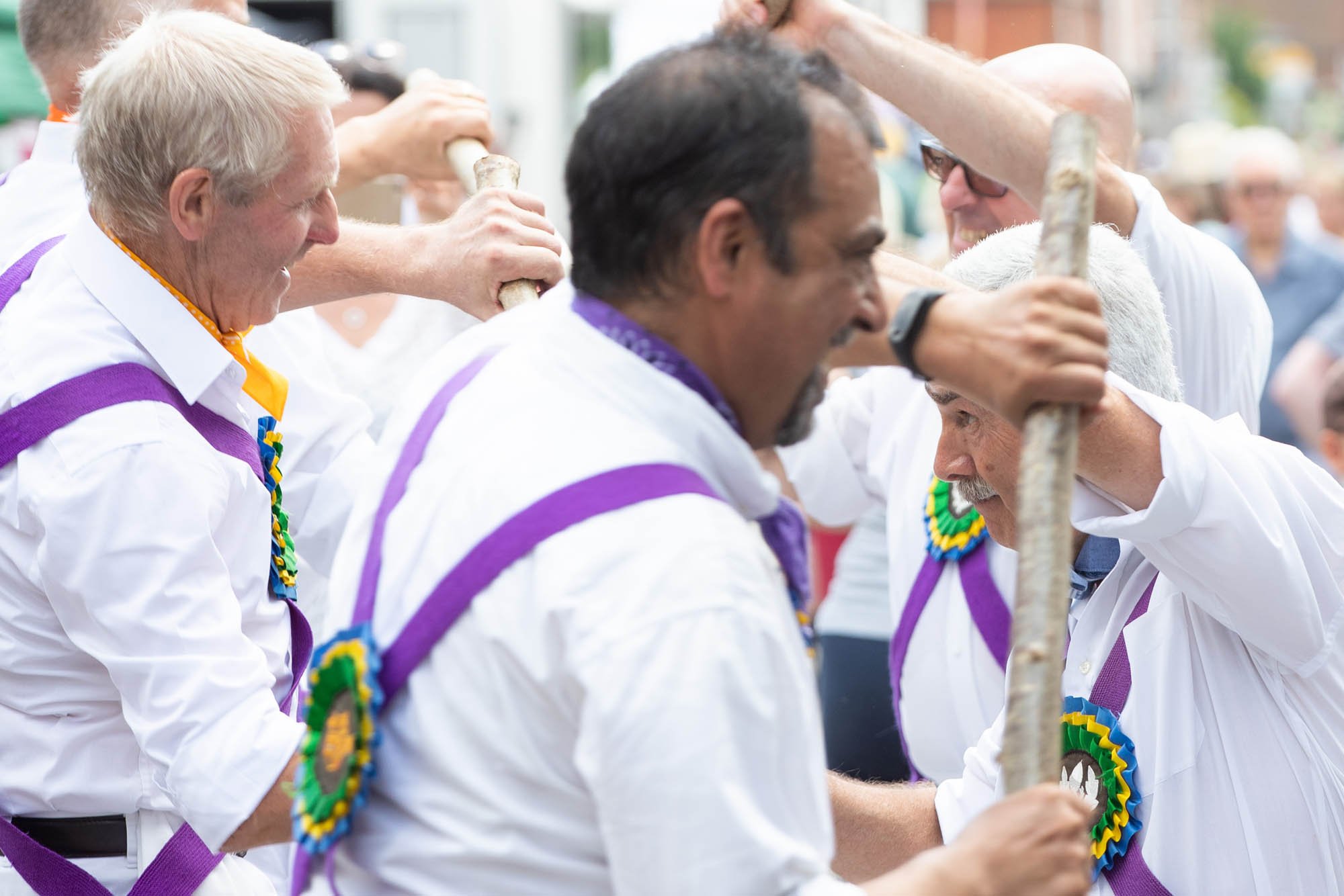 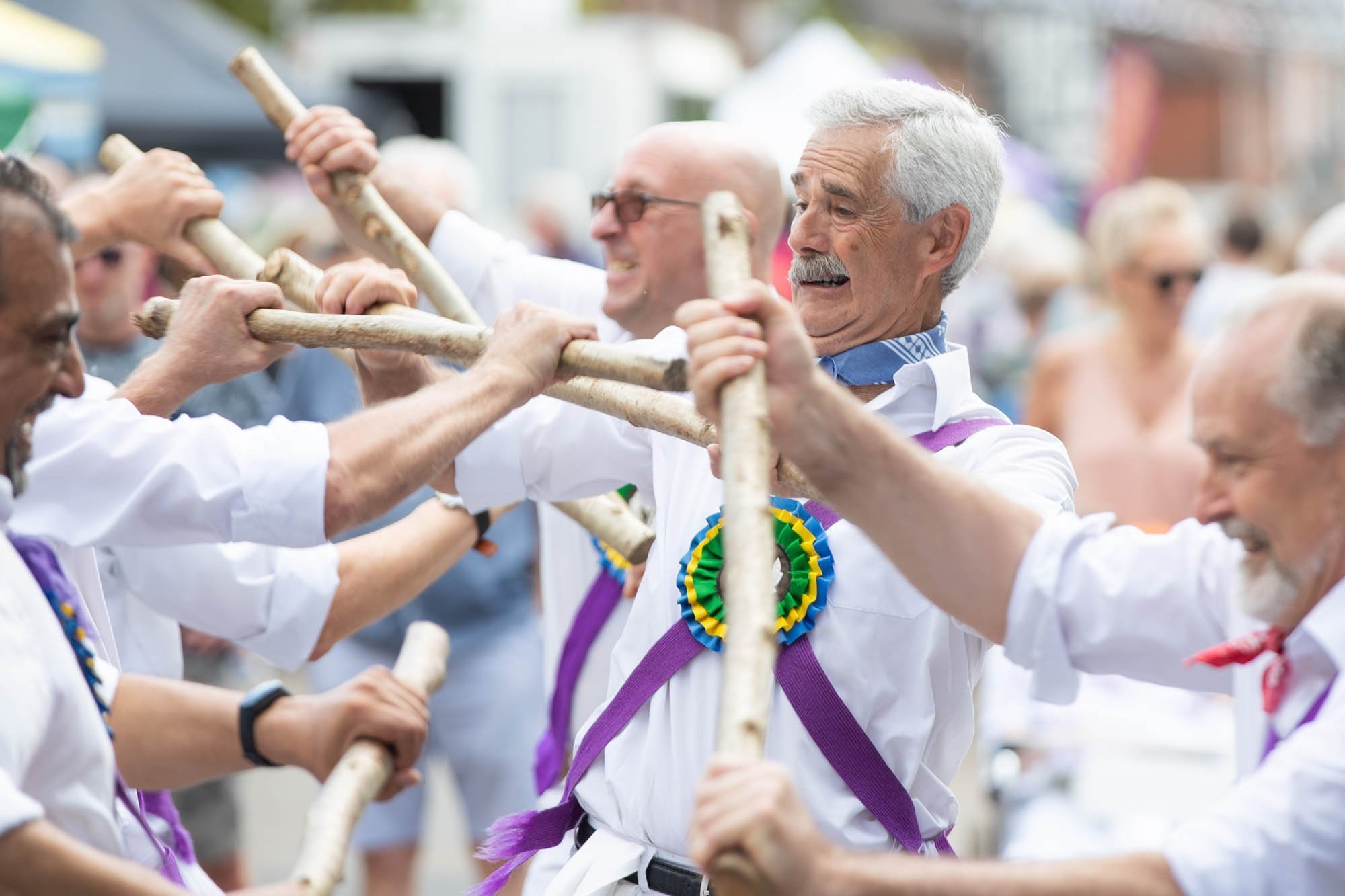 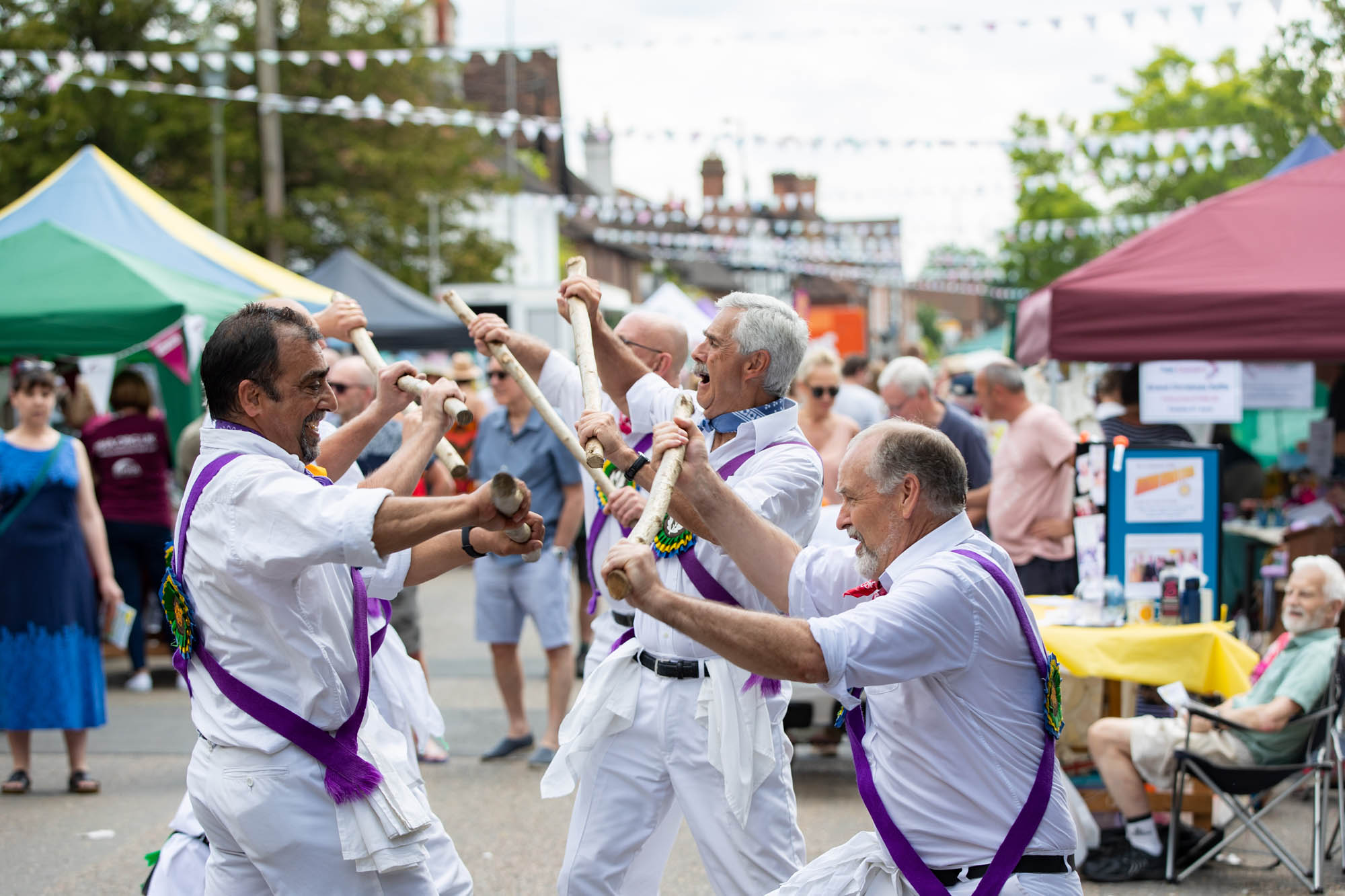 And finally getting my favourite: 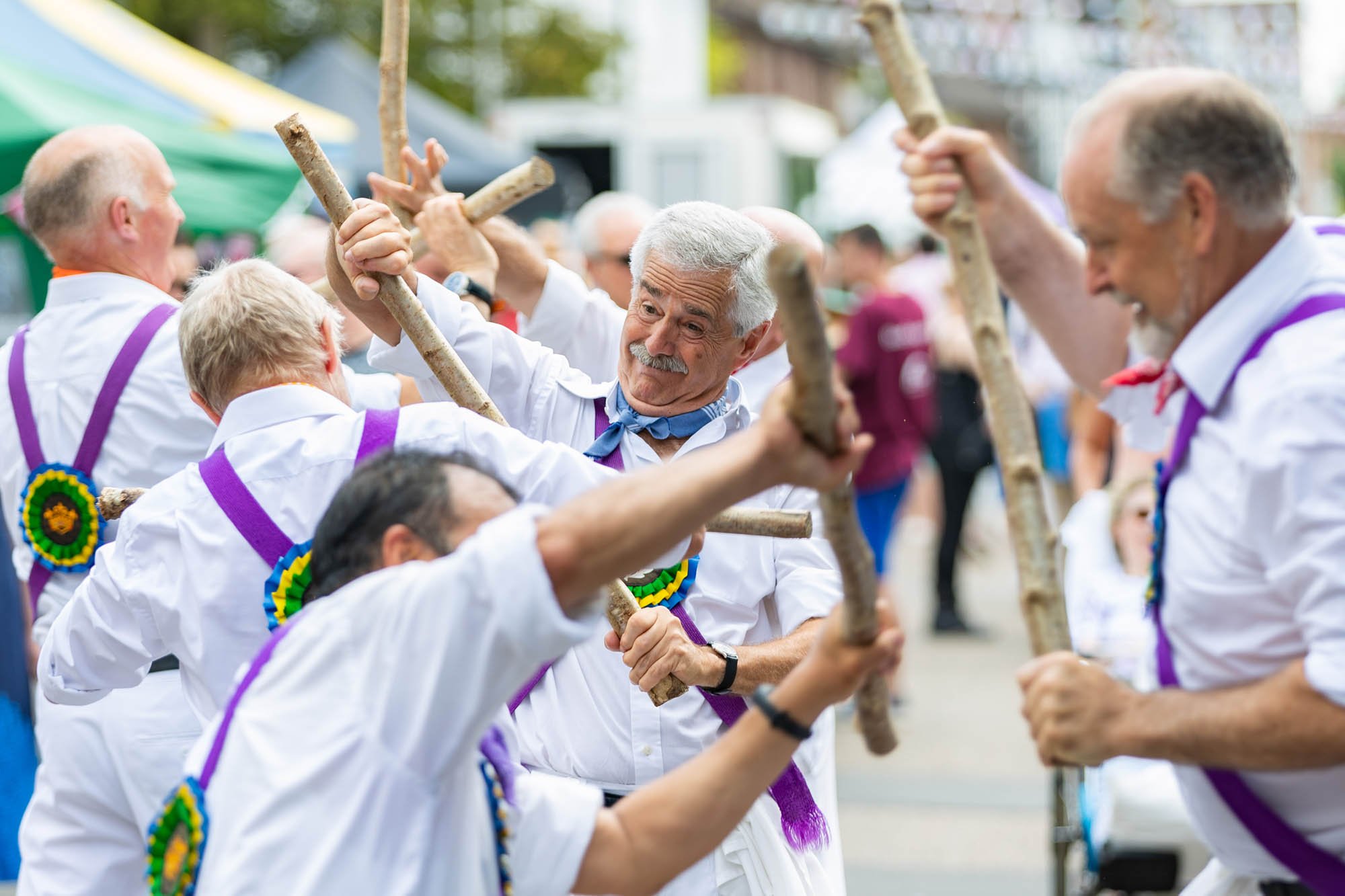 Which also works nicely in a square crop for Instagram.

So there you have it – in a few minutes, the process I used to get from a bunch of beery blokes dancing in a street, to a picture that will go in my events portfolio.